Judge orders 3 to trial in plot to kidnap Michigan governor 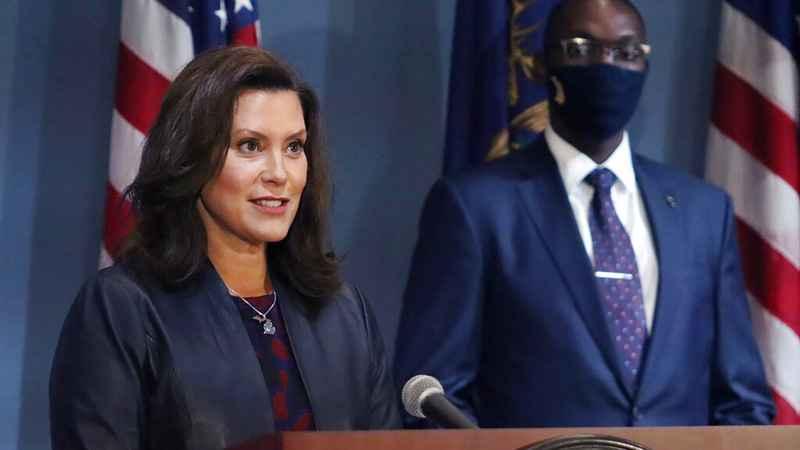 A Michigan judge on Monday ordered three men to stand trial in a plot to kidnap Democratic Michigan Gov. Gretchen Whitmer over her coronavirus restrictions.

"The defendants are joined at the hip here," Klaeren said before announcing his ruling. "The prosecution did a good job in establishing who knew what and when."

The three men are accused of aiding six others who are charged in federal court with conspiring to kidnap Whitmer. Five more people are also charged in state courts.

The FBI in October said it broke up a plot to kidnap Whitmer by anti-government extremists upset over her coronavirus restrictions.

Klareen said there was enough evidence for trial on charges of providing material support for terrorist acts, gang membership and using a firearm during a felony. Klaeren dismissed a charge of threat of terrorism against Musico and Morrison. Bellar didn’t face that charge.

According to a court affidavit, Musico and Morrison are founding members of the Wolverine Watchmen, which authorities described as "an anti-government, anti-law enforcement militia group."

The Watchmen have met periodically for firearms and tactical training in remote areas "to prepare for the ‘boogaloo,’ a term referencing a violent uprising against the government or impending politically motivated civil war," state police Det. Sgt. Michael Fink wrote in an affidavit.

Klaeren said Monday that Bellar, Musico and Morrison "individually and collectively wanted to precipitate the violence associated with ‘boogaloo.’"

"Pretty much from day one, it’s pretty clear the numbers of the Wolverine Watchmen believed in the ‘boogaloo,’ believed in civil war, believed it was coming," the judge said.

Bellar’s attorney, Andrew Kirkpatrick, argued during Monday’s hearing that protests last year in cities around the United States against police brutality may have prompted Bellar to participate in training for a "potential civil war."

"He got into this because 2020 has been like no other," Kirkpatrick said. "People were concerned. They were concerned about what may happen in their hometown. There was training."

About a dozen of the men facing federal and state charges were among armed demonstrators who entered the Michigan Senate gallery on April 30 following a larger protest outside the Capitol against Whitmer’s stay-at-home order.

Following arrests tied to the kidnapping plot, Whitmer said rhetoric from then-President Donald Trump had been a "rallying cry" for extremists.

She said the Republican president had spent months during the coronavirus pandemic "denying science, ignoring his own health experts, stoking distrust, fomenting anger and giving comfort to those who spread fear and hatred and division."

At the time, Trump claimed Whitmer had done a "terrible job" and should lift restrictions aimed at slowing the virus’ spread.