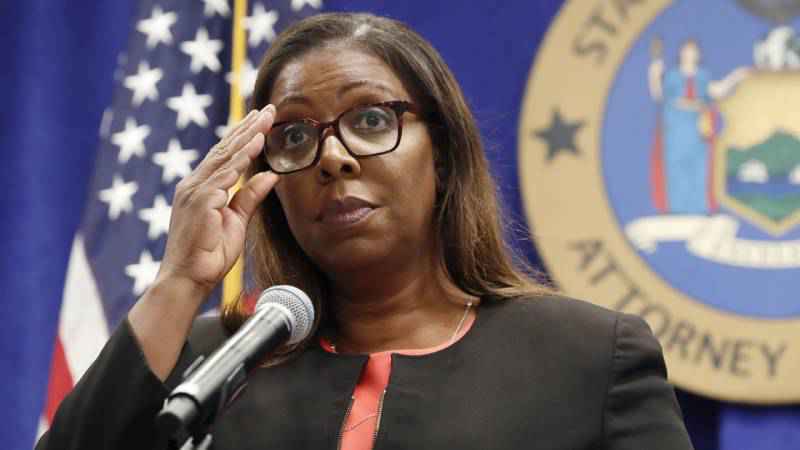 In this Aug. 6, 2020, file photo, New York State Attorney General Letitia James adjusts her glasses as she announces that the state is suing the National Rifle Association during a press conference, in New York. A New York judge on Thursday, Jan. 21, 2021, denied the National Rifle Association's bid to throw out a state lawsuit that seeks to put the powerful gun advocacy group out of business. [AP/Kathy Willens, File]

A New York judge on Thursday denied the National Rifle Association’s bid to throw out a state lawsuit that seeks to put the powerful gun advocacy group out of business.

Judge Joel Cohen’s ruling will allow New York Attorney General Letitia James’ lawsuit to move ahead in state court in Manhattan, rather than dismissing it on technical grounds or moving it to federal court, as the NRA’s lawyers desired.

James is the state’s chief law enforcement officer and has regulatory power over nonprofit organizations incorporated in the state, such as the NRA, Cohen said.

"It would be inappropriate to find that the attorney couldn’t pursue her claims in state court just because one of the defendants wants to proceed in federal court," Cohen said at a hearing held by video because of the coronavirus pandemic.

Cohen also rejected the NRA’s arguments that James’ lawsuit was improperly filed in Manhattan and should’ve been filed in Albany, where the NRA’s incorporation paperwork lists an address. The NRA’s arguments for dismissing the case did not involve the merits of the case.

"Today’s order reaffirms what we’ve known all along: the NRA does not get to dictate if and where they will answer for their actions," James said in a statement.

The NRA has been incorporated in New York since 1871, though it is headquartered in Virginia and last week filed for bankruptcy protection in Texas in a bid to reincorporate in that state.

The NRA, in announcing its bankruptcy filing last Friday, said it wanted to break free of a "corrupt political and regulatory environment in New York" and that it saw Texas as friendlier to its interests.

The NRA’s lawyers said at a bankruptcy court hearing on Wednesday in Dallas that they wouldn’t use the Chapter 11 proceedings to halt the lawsuit.

After Thursday’s ruling, they said they were ready to go ahead with the case, including a meeting with lawyers from James’ office on Friday and another hearing in March.

In a letter to Cohen in advance of Thursday’s heading, NRA lawyer Sarah Rogers said the organization had no position on seeking to stay the case through bankruptcy, but that it reserved right to seek such orders from bankruptcy court in the future.

Normally, a bankruptcy filing would halt all pending litigation. James’ office contends that its lawsuit is covered by an exemption involving a state’s regulatory powers and cannot be stopped by bankruptcy.

In seeking to dismiss or move the state’s lawsuit to federal court, Rogers argued that many of its misspending and self-dealing allegations were also contained in pending lawsuits in federal court — a slate of cases she described as a "tangled nest of litigation."

Part of Rogers’ argument for moving the state lawsuit to federal court involved an error in the state’s original filing that she said altered the timeline of when it was filed.

James’s office filed its lawsuit on Aug. 6, but later had to amend the complaint to include a part that was left. That same day, the NRA filed a lawsuit in federal court alleging James’ actions were motivated by hostility toward its political advocacy, including her comments in 2018 that the NRA is a "terrorist organization."

Rogers contended that because of the filing glitch James’ lawsuit should be considered a counterclaim to the NRA’s lawsuit and handled alongside of it in federal court.

Cohen rejected that, saying Rogers was placing "far too much weight on a non-substantive error that was quickly fixed."