Flames pour from section of Superdome roof in New Orleans 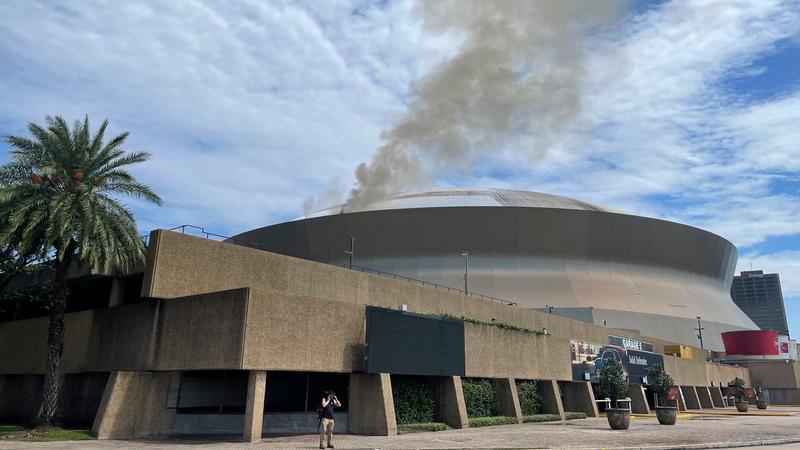 Smoke and flames shot through the side of the Superdome’s roof on Tuesday as crews worked to clean and prepare the New Orleans sports and entertainment arena for painting.

The New Orleans Fire Department confirmed firefighters responded to flames on the building’s roof shortly after 12:30 p.m. The fire appeared to be under control a short time later.

New Orleans Emergency Management Services said on Twitter that they were transporting one person to the hospital for "minor burns." Emergency officials called on people to stay away from the area.

Crews were power washing the roof this week to prepare it to be painted, officials said.

The @NOLAFireDept is responding to a fire at the @CaesarsDome. Please avoid the area near the dome. pic.twitter.com/mOGOmihszv

Here’s a closeup of the @NOLAFireDept working a fire on the @CaesarsDome roof this afternoon. The fire is now under control. One patient transported with minor burns. ??????‍?? pic.twitter.com/qundJjqDaY

The fire happened in a section of Superdome roofing called the "gutter tub," said ASM Global VP of stadiums Doug Thornton, speaking with The Times Picayune/The New Orleans Advocate. Thornton told the newspaper that they were assessing the damage but so far it did not appear that the structural integrity of the iconic New Orleans sporting and entertainment venue had been compromised.

A photo posted on the city’s emergency management Twitter feed showed firefighters in the trench that separates the Superdome roof from an outer wall as they sprayed down the fire-blackened walls.

ASM Global manages the Superdome. A spokesman did not immediately respond to a telephone call from The Associated Press.

The NFL’s New Orleans Saints have regularly played home games at the venue, often drawing capacity crowds. The Superdome also has been the site of seven Super Bowls in recent decades, and is also used for concerts, college football and other events.

The next Saints home game at the Superdome is scheduled for Oct. 3 when the team faces the New York Giants. The team’s final preseason home game slated for Aug. 28 was canceled due to impending Hurricane Ida, which made landfall the next day. Since the storm, the team has been practicing in the Dallas area. The team’s Sept. 12 game against the Green Bay Packers was moved to Jacksonville, Florida, out of concerns for the city’s wider infrastructure and Dome staff although the Dome itself was not damaged during Ida.