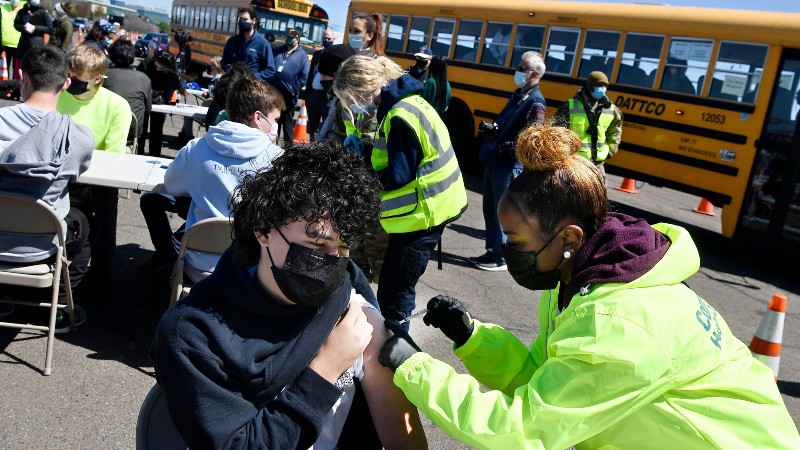 FILE - In this April 26, 2021, file photo, CREC Academy of Aerospace and Engineering sophomore Brian Acevedo, 16, receives a COVID-19 vaccine from nurse Myra Glass, of East Hartford, during a mass vaccination site at Pratt & Whitney Runway in East Hartford, Conn. Teams of experts are projecting COVID-19's toll on the U.S. will fall sharply by the end of July, according to research released by the government Wednesday, May 5.[AP Photo/Jessica Hill, File]

Teams of experts are projecting COVID-19’s toll on the U.S. will fall sharply by the end of July, according to research released by the government Wednesday.

But they also warn that a “substantial increase” in hospitalizations and deaths is possible if unvaccinated people do not follow basic precautions such as wearing a mask and keeping their distance from others.

The Centers for Disease Control and Prevention paper included projections from six research groups. Their assignment was to predict the course of the U.S. epidemic between now and September under different scenarios, depending on how the vaccination drive proceeds and how people behave.

Mainly, it’s good news. Even under scenarios involving disappointing vaccination rates, COVID-19 cases, hospitalizations and deaths are expected to drop dramatically by the end of July and continue to fall afterward.

Under the most optimistic scenarios considered, by the end of July new weekly national cases could drop below 50,000, hospitalizations to fewer than 1,000, and deaths to between 200 and 300.

The projections are probably in line with what many Americans were already expecting.

With COVID-19 deaths, hospitalizations and cases plummeting since January, many states and cities are already moving to ease or lift restrictions on restaurants, bars, theaters and other businesses and talking about getting back to something close to normal this summer.

President Joe Biden on Tuesday set a goal of delivering shots to 70% of U.S. adults by July Fourth. Such a goal, if met, would fit in with the best-case scenarios, said one of the study’s co-authors, CDC biologist Michael Johansson.

Under more pessimistic scenarios, with subpar vaccinations and declining use of masks and social distancing, weekly cases probably would still drop but could number in the hundreds of thousands, with tens of thousands of hospitalizations and thousands of deaths.

All the projections trend down, illustrating the powerful effect of the vaccination campaign. But there’s a devastating difference between the more gently sloping declines in some scenarios and the more dramatic drops in others, said Jennifer Kates, director of global health and HIV policy at the Kaiser Family Foundation.

“Each of these differences are people’s lives,” said Kates, who is part of a Kaiser research team that has focused on COVID-19 and was not involved in the CDC study.

The U.S. death toll stands at more than 578,000. The CDC paper gives no overall estimate of how high the number of dead might go. But a closely watched projection from the University of Washington shows the curve largely flattening out in the coming months, with the toll reaching about 599,000 by Aug. 1.

More than 56% of the nation’s adults, or close to 146 million people, have received at one dose of vaccine, and almost 41% are fully vaccinated, according to the CDC.

Johansson said the paper is intended not so much as a prediction of exactly what’s going to happen but as a way to understand how things might unfold if vaccination drives or other efforts stumble.

By September, assuming high vaccination rates and continuing use of prevention measures, the models indicate new cases could fall to just a few hundred per week and just tens of hospitalizations and deaths.

The paper also sketched out a worst-case scenario, in which cases could rise to 900,000 per week, hospitalizations to 50,000, and deaths to 10,000. That most likely would happen sometime this month, the projections said.

However, the paper’s projections are based on data available through late March, when the national picture was somewhat darker.

The CDC paper "is already looking a little outdated, because we’ve seen cases continue to go down, and hospitalizations go down, and deaths go down,” Kates said.

There is variation from state to state in how well vaccination campaigns are going and how fast restrictions are being abandoned, and that will probably mean some states will suffer a higher toll from COVID-19 than others in the coming months, Kates said.

“If you take the foot off the gas," she said, "you can really have some bad outcomes."

The paper doesn’t look past September, and scientists cannot say for sure what the epidemic will look like next fall and winter because it’s not known how enduring vaccine protection will be or whether variants of the virus will prove to be a greater problem.

Like the flu, COVID-19 could increase as people move indoors in the cold weather.

“My hope is with enough people vaccinated we will be able to get to something that will resemble maybe a bad flu season,” said William Hanage, a Harvard University expert on disease dynamics who was not involved in the research. But "it’s not going to go away. It’s not going to be eradicated.”