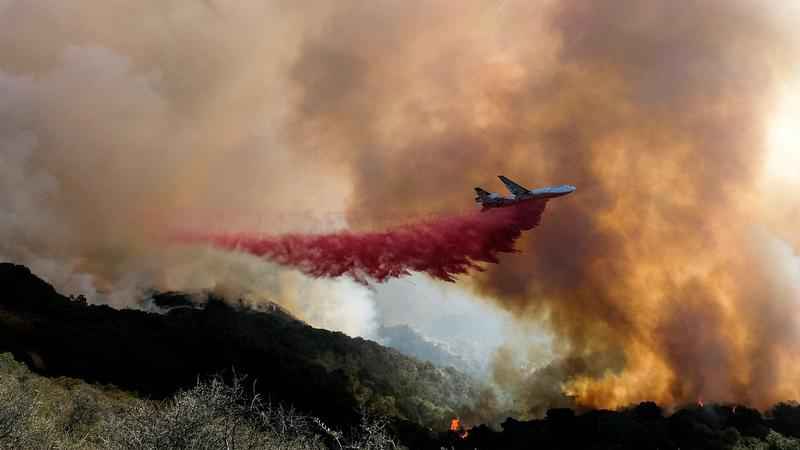 An air tanker drops retardant on a wildfire Wednesday, Oct. 13, 2021, in Goleta, Calif. A wildfire raging through Southern California coastal mountains threatened ranches and rural homes and kept a major highway shut down Wednesday as the fire-scarred state faced a new round of dry winds that raise risk of flames. The Alisal Fire covered more than 22 square miles (57 square kilometers) in the Santa Ynez Mountains west of Santa Barbara.[AP Photo/Ringo H.W. Chiu]

More than 1,300 firefighters helped by aircraft dumping water and fire retardant worked Thursday to box in a wildfire in a Southern California coastal mountain range that has closed a major highway and rail line for days.

The Alisal Fire has charred more than 26 square miles (67 square kilometers) of chaparral and grass in the Santa Ynez Mountains west of Santa Barbara since it erupted Monday amid high winds. It is only 5% contained.

Authorities have said the fire is a threat to about 100 ranches and isolated homes. Among the properties being protected is Rancho del Cielo, which was once owned by Ronald and Nancy Reagan and used as their western retreat during his presidency. The 688-acre (278-hectare) ranch sits high atop the mountain range.

Winds when the fire broke out blasted flames down the face of the mountain range toward the Pacific Ocean and the fire reached a beach after jumping the U.S. 101 highway and a rail line. The winds since then have shifted but have been less intense.

Firefighters on Thursday were focusing on stopping the movement of the blaze to the west after winds pushed it that way late Wednesday, said fire information officer Kristen Allison.

Aircraft dropped a long line of fire retardant along a ridgetop road to help keep the fire from moving north and a wildfire burn scar slowed the blaze’s movement to the east. An older burn scar lay to the west.

"The further this fire moves both east and west it will move into some fire scars from previous wildfires, so those areas aren’t going to have nearly the amount of fuels for the fire to work with," said Andrew Madson, an information officer with Los Padres National Forest.

The fire remained about a half-mile (0.8 kilometer) from the former Reagan ranch on Thursday, said Jessica Jensen, an official of the Young America’s Foundation, a conservative organization that now operates the ranch.

The foundation has expressed confidence in measures to keep the ranch property safe.

Pacific Gas & Electric initially planned to cut power to thousands of customers in numerous counties on Thursday to prevent fires from being ignited by wind damage to power lines.

But the utility said the wind event appeared to be weaker than the one that led to thousands of shutoffs on Monday and then rapidly scaled down the latest forced outage plan. By midday, customers in parts of only one county faced a notice of a potential power shutoff.

California wildfires have scorched nearly 3,900 square miles (10,101 square kilometers) this year and destroyed more than 3,600 homes, businesses and other structures, according to the state Department of Forestry and Fire Protection.

A historic drought in the American West tied to climate change is making wildfires harder to fight. It has killed millions of trees in California alone. Scientists say climate change has made the West much warmer and drier in the past 30 years and will continue to make weather more extreme and wildfires more frequent and destructive.