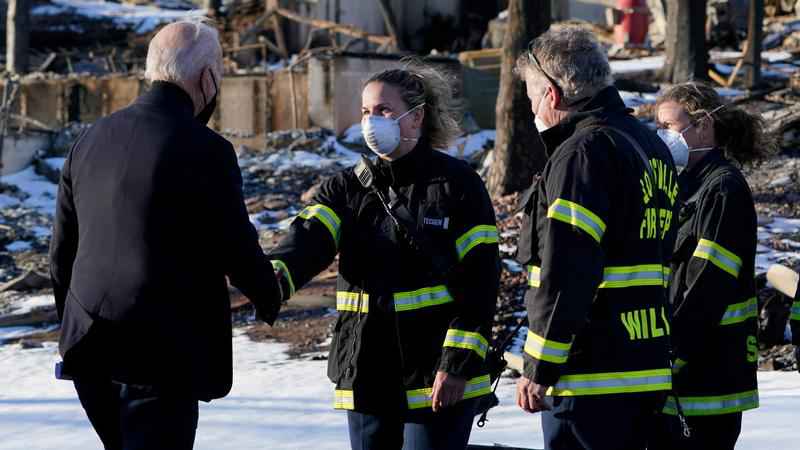 President Joe Biden greets first responders as he tours a neighborhood in Louisville, Colo., Friday, Jan. 7, 2022, that was impacted by the recent wildfire. [AP Photo/Susan Walsh]

One victim was identified Friday and one person remained unaccounted for out of some 35,000 forced from their homes.

Biden, and his wife, Jill, arrived in the Harper Lake neighborhood of Louisville on Friday afternoon to survey the damage, passing the scorched remnants of homes next to damaged structures still standing. They walked along a street where homes burned to their concrete foundations, meeting residents and local officials who have been overseeing the response and recovery.

Speaking at a recreation center in Louisville, Biden praised the “incredible courage” of the people who lost their homes in the fire and pledged the full support of the federal government to help rebuild.

“Not only are you helping each other but we’re here with you, we’re not going to go away," Biden said. “I intend to do what ever it takes as long as it takes to support you.”

The fire broke out unusually late in December following months of drought with a dry fall and a winter with hardly any snow. Nearly 1,100 buildings, most of them homes, were destroyed, causing an estimated $513 million in damages.

Biden encouraged residents to “hang on to one another,” adding, “You will get through this and you’ll be stronger for it.”

The cause of the fire remains under investigation. Investigators have narrowed their search for the cause to an area near Boulder where a passer-by captured video of a burning shed on Dec. 30, when the fire began. But it could still take authorities weeks to figure out how it started.

“I can’t imagine what’s it’s like to be here in this neighborhood and see winds whipping up to 100 miles an hour and see flames approaching,” Biden said.

Most of the buildings destroyed were homes. But the blaze also burned through eight businesses in Louisville and neighboring Superior. Federal, state and local agencies and nonprofits have been offering housing assistance, counseling, food, stipends and other aid to residents.

Judy Delaware, who met Biden in front of what was once her home, said the president was kind and listened and “he really comes across very differently than he does when he’s doing his speeches.”

“He really spoke from his heart and he had some really great answers for us, of what we need to do as far as next steps," she added. “He was very sincere and asked about our families.”

Delaware said she had one last photo of her home, taken the night before the fire at her daughter’s engagement party. “That was the last picture that was ever taken in the house.”

“We know how soon a new disaster can come along,” she added. “We just don’t want them to lose sight of what’s happened here,"

Speaking after her husband, Jill Biden said she could tell “what a warm, strong community you are" and offered condolences to families who lost their pets in the fire.

She said she and the president are “animal people,” too.

Greeting a line of firefighters and EMS personnel one by one, Biden passed out challenge coins bearing the presidential seal as he thanked them for their service with a handshake.

Toward the end of the tour, Jill Biden hugged a man who told her, “We lost everything.” The president, who was speaking with another family, then joined and offered a hug of his own.

“I’m not even properly dressed because this is all I have,” the man said to the president, gesturing to his shorts. “We definitely need help,” the man’s son told Biden.

Stacy Moore stood in her backyard Friday afternoon surveying the fire’s destruction of the home she’d lived in since the 1990s. She had been drawn to the area because it was supposed to be free of threats of wildfires, floods or tornadoes that other parts of the state typically see.

“I thought it was perfectly safe,” she said.

“I’d like to see the federal government and our city governments and our state governments help educate people on how we can use best building practices," she said shortly before Biden arrived. She’s been told home insurance will "come nowhere close” to covering the cost of rebuilding.

On Friday, authorities identified a person whose remains were found near the origin of the fire earlier this week as Robert Sharpe, 69, of Boulder. In a statement, his family said Sharpe was a longtime resident who worked in the construction industry for many years.

“The total devastation of this event has shocked and impacted so many in the community," the family said in a statement thanking authorities for the intensive search for Sharpe. “Our hearts go out to the many others who have suffered losses.”

Last year, Biden made several trips to survey the aftermath of weather events, including ice storms in Houston, wildfires in California and flooding in New York City and New Jersey.

In mid-December, he visited residents of Dawson Springs, Kentucky, after a series of tornadoes tore through that state and seven others, killing scores of people.

Biden said Friday that the extreme events highlight that America needs to “summon the courage” to address climate change.

“We can’t ignore the reality that these fires are being supercharged” by the changing climate, he said. “The situation is a blinking code red for our nation.”

Scores of people stood outside the recreation center as Biden spoke inside, and cheered as he left the area to return to the airport.

After surveying the scene in Colorado, Biden and the first lady traveled to Las Vegas to attend Saturday’s funeral for Harry Reid, the former Senate majority leader who died last week.