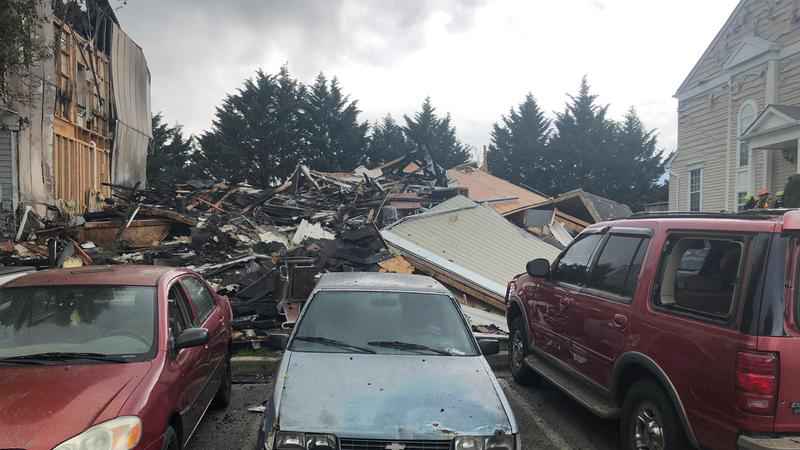 The site of a fire in Woodlawn, Md., where three people were killed, including a suspect, and two others were injured on Saturday, May 8, 2021. [AP Photo/Brian Witte]

Three people were killed, including a suspect, and two were injured in a shooting and fire early Saturday morning in Maryland, according to authorities.

It was not immediately clear what led to the violence on a residential street in suburban Baltimore, and neither the suspect nor the victims were immediately identified.

Around 6:40 a.m., officers responded to reports of both a fire and active shooter in Woodlawn, Baltimore County Police spokeswoman Joy Stewart said at a news conference.

Officers found an armed male outside and shot him, according to Stewart.

Authorities then began fighting a fire that started in a townhouse and spread to two others, Tim Rostkowski, a county fire department spokesman, said at the news conference.

The building where the fire started as well as one adjacent to it collapsed, Rostkowski said, and a third dwelling was heavily damaged. He said during the briefing Saturday morning that the fire was still burning and a utility company was working to shut off the natural gas to the building.

Police said that in addition to the suspect, two others were dead and two were injured, one critically. Besides describing the suspect as male, Stewart said she could not immediately provide more details about the people involved.

"We have this fire that happened. We also have this suspect who was armed. How they’re all related it’s really too early to tell at this point," Stewart said.

Police initially said two people were unaccounted for but tweeted Saturday afternoon that they had been located.

An investigation and search of the scene for possible additional victims was ongoing.