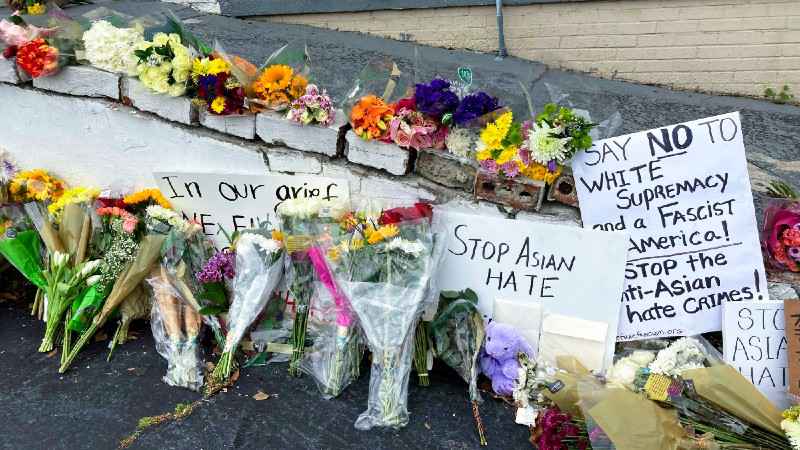 FILE - In this March 19, 2021, file photo, flowers, candles and signs are displayed at a makeshift memorial in Atlanta, following a shooting. The murder case against Robert Aaron Long, a white man accused of shooting and killing six women of Asian descent and two other people at Atlanta-area massage businesses, could become the first big test for Georgia’s new hate crimes law.[AP Photo/Candice Choi, File]

While a pastor spoke during Yong Ae Yue’s funeral Friday, a sunbeam came through the window behind him and shone upon Yue’s two sons, a sure sign their mother was watching, one of them said.

As his mother’s body lay before him in a casket draped with pink flowers, Elliott Peterson pointed to a large photo of her on display and asked the friends and family gathered in a funeral home in Peachtree Corners to remember her like that — a big grin on her face and two fingers on each hand extended in a "V."

Yue was one of eight people fatally shot March 16 in attacks on massage businesses in Atlanta and nearby Cherokee County.

The others are also being grieved by friends, family and their communities. Suncha Kim, 69, volunteered for charities. Soon Chung Park, a former dancer, remained youthful and fit at age 74. Xiaojie "Emily" Tan, 49, was an entrepreneur who owned Youngs Asian Massage and other businesses. Daoyou Feng, 44, was one of her employees. Delaina Yaun, 33, was a new mother. Paul Michels, 54, installed security systems. Hyun Jung Grant, 51, loved music and worked at Gold Spa to support two sons.

Four of the women slain were of Korean descent and leaders of the Korean American community planned a "worldwide vigil" for the shooting victims Friday night. The event is to be held at the Korean American Association of Greater Atlanta in Norcross and will be livestreamed.

Donations pour in for families of Atlanta shooting victims

The couple divorced some time after their second son’s birth and Yue made the tough decision for her boys to live with their father, believing that would give them a better chance to succeed, but she remained a loving presence in their lives, Pak said.

Elliott Peterson said his mother wasn’t very outwardly affectionate but showed her love through food. She was selfless and would be happy about the outpouring of support her sons have received, he said.

His daughter, Cassidy, remembered bragging to her friends about her grandmother’s culture and cooking.

"Her skill wasn’t what made her food so good," Cassidy Peterson said. "It was the love she put into it."

Monica Baker, Elliott’s wife and Cassidy’s mother, recalled the first time she met Yue, nervous and determined to make a good impression. She fell in love with karaoke that night aided by the liquid courage provided by the soju Yue poured for her, she said, drawing chuckles.

Yue held a variety of jobs over the years, and had only started working at Aromatherapy Spa in Atlanta in October, Pak said. She told her sons her job was to cook, clean and watch security cameras.

She lived alone with a dog and a cat and had a tight-knit group of friends, Pak said.

Elliott Peterson, 42, served in the military and retired last September. He said during the funeral that he’s so grateful that he and his children were able to spend two weeks visiting with his mother in October.

Robert Peterson, 38, saw his mother frequently while doing undergraduate studies at Morehouse College in Atlanta and then went on to get a doctorate in medical sociology from Ohio’s Case Western Reserve University, Pak said.

"As Bobby tells it, she used to brag to her friends, ‘Bobby’s a doctor but not a medicine doctor, he’s a thinking doctor,’" Pak said.

A slideshow of photos of Yue dancing and posing with her sons and grandchildren played during the funeral and mourners listened to two Korean songs, a nod to her love of music. Letters of condolence from several elected officials — including Georgia U.S. Sens. Jon Ossoff and Raphael Warnock and Atlanta Mayor Keisha Lance Bottoms — were read aloud.

Robert Aaron Long, a 21-year-old white man, is accused of shooting five people, killing four and injuring one, at Youngs Asian Massage in Cherokee County. Police say he then drove 30 miles (48 kilometers) south to Atlanta and shot three people at Gold Spa before going across the street to Aromatherapy and shooting Yue. Seven of the slain were women, six of Asian descent.

Long is charged with eight counts of murder and one count of aggravated assault.