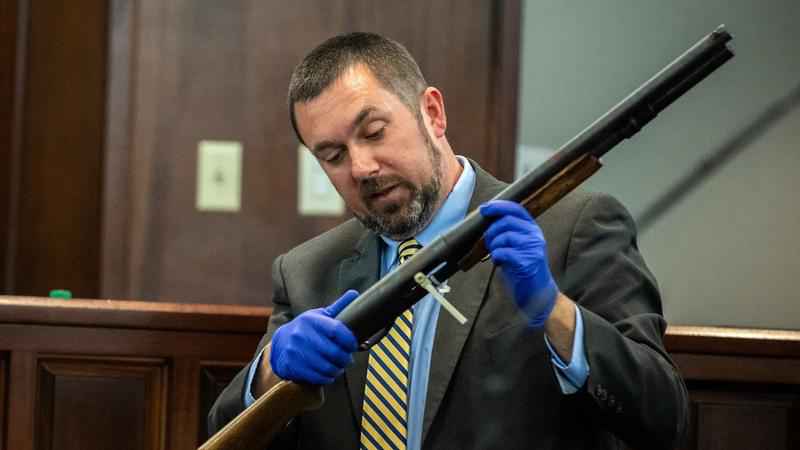 Firearms expert Brian Leppard with the Georgia Bureau of Investigation examines a 12-gage Remington pump shotgun as part of evidence during the trial of Greg McMichael and his son, Travis McMichael, and a neighbor, William "Roddie" Bryan in the Glynn County Courthouse, Monday, Nov. 15, 2021, in Brunswick, Ga. The three are charged with the February 2020 slaying of 25-year-old Ahmaud Arbery.[AP Photo/Stephen B. Morton, Pool]

Ahmaud Arbery’s autopsy photos were shown to jurors on Tuesday at the murder trial of three white men who chased the Black man down before he was fatally shot their neighborhood last year.

Prosecutors called as a witness Dr. Edmund Donoghue, who examined Arbery’s body on Feb. 24, 2020 — the day after he was slain — at the Georgia Bureau of Investigation’s crime lab in coastal Georgia.

“His cause of death was multiple shotgun wounds,” Donoghue said as the questioning began.

The photos showed shotgun wounds that left a gaping hole in the center of Arbery’s chest.

The testimony followed the judge’s refusal to declare a mistrial over defense claims that jurors were tainted when Arbery’s mother wept over evidence photos, calling attention to the presence of the Rev. Jesse Jackson, sitting beside her in the courtroom’s public gallery.

Rejecting a defense lawyer’s complaints about Black pastors at the trial as “reprehensible,” Superior Court Judge Timothy Walmsley said no group would be excluded from his courtroom.

Father and son Greg and Travis McMichael armed themselves and pursued the 25-year-old in a pickup truck after spotting him running in their neighborhood on Feb. 23, 2020. Their neighbor William “Roddie” Bryan joined the chase and took cellphone video of Travis McMichael shooting Arbery three times with a shotgun.

Their defenders say the men had a right to make a citizens arrest of someone they suspected of stealing from the neighborhood, and that the younger McMichael fired the gun in self-defense after Arbery tried to take it from him.

They also say that the presence of civil rights icons at the trial will unfairly influence the jury, all but one of whom are white. Jackson acknowledged Monday that Arbery’s mother wept “very quietly” in the courtroom after prosecutors showed a photo of her son to a witness.

“As the judge said, it was my constitutional right to be there,” Jackson said later outside the courthouse. “It’s my moral obligation to be there.”

The Rev. Al Sharpton sat last week with the victim’s parents, Wanda Cooper-Jones and Marcus Arbery Sr., inside the Glynn County courtroom. He pledged to return to the courthouse, and activists said 100 Black pastors will join him.

Bryan and the McMichaels are charged with murder and other crimes. Prosecutors say they chased Arbery for five minutes to keep him from exiting the Satilla Shores subdivision outside the port city of Brunswick. The chase ended when Arbery, trailed by Bryan’s truck, tried to run around the McMichaels’ truck as it idled in the road ahead. The video shows Travis McMichael confronting Arbery and then shooting him as he throws punches and grapples for the gun.

The McMichaels told police they suspected Arbery was a burglar after security cameras recorded him several times inside a home under construction, five houses away.