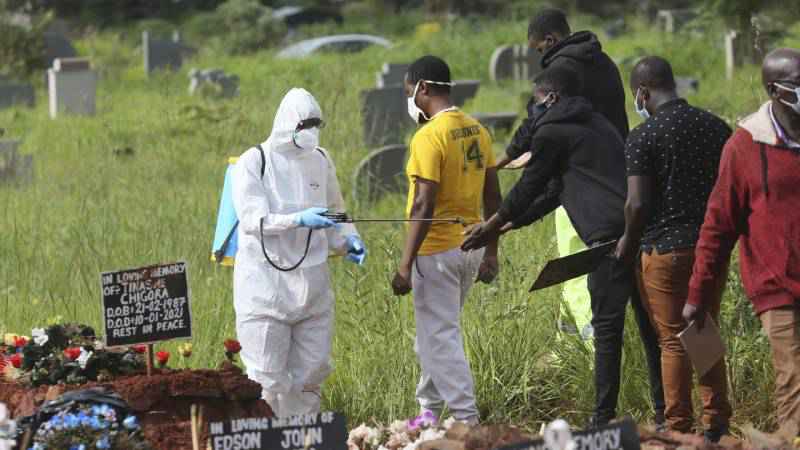 In this Jan. 15, 2021, file photo, a health worker disinfects family members during a burial of a person who died from COVID-19, in Harare, Zimbabwe. Africa has surpassed 100,000 confirmed deaths from COVID-19 as the continent praised for its early response to the pandemic now struggles with a dangerous resurgence and medical oxygen often runs desperately short.[AP/Tsvangirayi Mukwazhi, File]

Africa has surpassed 100,000 confirmed deaths from COVID-19 as the continent praised for its early response to the pandemic now struggles with a dangerous resurgence and medical oxygen often runs desperately short.

"We are more vulnerable than we thought," the director of the Africa Centers for Disease Control and Prevention, John Nkengasong, told The Associated Press in an interview reflecting on the pandemic and a milestone he called "remarkably painful."

He worried that "we are beginning to normalize deaths," while health workers are overwhelmed.

The 54-nation continent of some 1.3 billion people has barely seen the arrival of large-scale supplies of COVID-19 vaccines, but a variant of the virus dominant in South Africa is already posing a challenge to vaccination efforts. Still, if doses are available, the continent should be able to vaccinate 35% to 40% of its population before the end of 2021 and 60% by the end of 2022, Nkengasong said.

In a significant development on Friday, an African Union-created task force said Russia has offered 300 million doses of the country’s Sputnik V vaccine, to be available in May. The AU previously secured 270 million doses from AstraZeneca, Pfizer and Johnson & Johnson.

Health officials who breathed a sigh of relief last year when African countries did not see a huge number of COVID-19 deaths are now reporting a jump in fatalities. The Africa CDC on Friday said overall deaths are at 100,294.

Deaths from COVID-19 increased by 40% in Africa in the past month compared to the previous month, the World Health Organization’s Africa chief, Matshidiso Moeti, told reporters last week. That’s more than 22,000 people dying in the past four weeks.

The increase is a "tragic warning that health workers and health systems in many countries in Africa are dangerously overstretched," she said, and preventing severe cases and hospitalizations is crucial.

But the latest trend shows a slowdown. In the week ending on Sunday, the continent saw a 28% decrease in deaths, the Africa CDC said Thursday.

Africa has reached 100,000 confirmed deaths shortly after marking a year since the first coronavirus infection was confirmed on the continent, in Egypt on Feb. 14, 2020.

But many more people across Africa have died of COVID-19, even though they are not included in the official toll.

South Africa, the hardest-hit country on the continent, saw over 125,000 excess deaths from natural causes between May 3 and Jan. 23.

While it is not clear how many were from the virus, there was a "close correspondence of the time of the excess deaths with the increases in confirmed COVID-19 cases in each province," the South African Medical Research Council said.

Since most countries in Africa lack the means to track mortality data, it is not clear how many excess deaths have occurred across the continent since the pandemic began.

"We are definitely not counting all the deaths, especially in the second wave," the Africa CDC’s Nkengasong told reporters last week.

While the continent is not seeing a "massive" number of deaths, he asserted that most people in Africa now know someone who has died of COVID-19. "People are dying because of a lack of basic care," he said, citing medical oxygen as a critical need.

"The second wave came with full might, partly because of this new variant (in South Africa), partly because we created superspreading opportunities" such as holiday parties, said Salim Abdool Karim, the top COVID-19 advisor to South Africa’s government. "The virus adapts and gets better with time because it’s mutating progressively to be better adapted."

In the unusual case of Tanzania, no one knows how many deaths, or even infections, have occurred since the country of some 60 million people stopped updating its number of cases in April.

But while populist President John Magufuli claims that COVID-19 has been defeated in Tanzania and questions the new vaccines without offering evidence, social media in recent days has seen a worrying increase in death notices by families saying loved ones died while struggling to breathe. Some had otherwise been healthy.

"He complained of fast-diminishing air in his respiratory system," one death notice in Dar es Salaam said this month.

Tanzania is now one of eight African countries with the more infectious variant of the virus that was first found in South Africa, according to the WHO, citing travelers from Tanzania who were discovered to have the variant overseas.

Nkengasong told the AP that Tanzania’s influential first president Julius Nyerere, once declared that if Africa is not united, it’s doomed.

"If we cannot exercise unity in this period of critical threat of COVID-19, then I don’t know what else unity means for the continent," Nkengasong said.

Another place where COVID-19 deaths are going uncounted is Ethiopia’s Tigray region, where a conflict between Ethiopian and Tigray forces has entered a fourth month and the health system has collapsed amid looting and artillery attacks. The United Nations has warned of "massive community transmission" of the virus.