Abortions resume in some Texas clinics after judge halts law 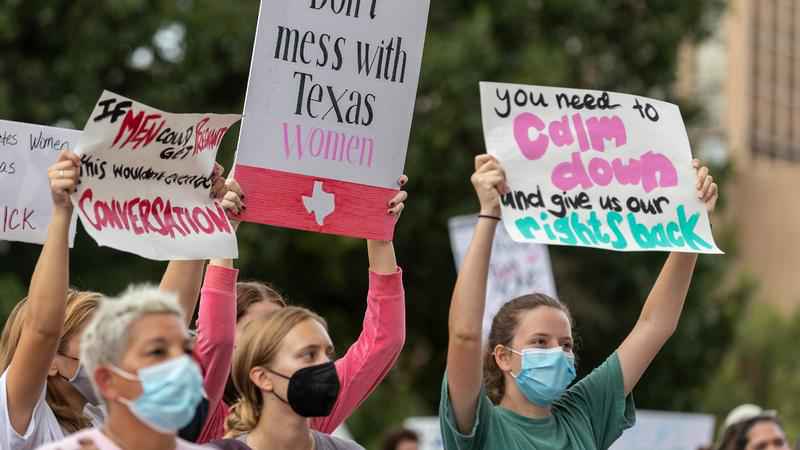 In this Oct. 2, 2021, file photo, people attend the Women's March ATX rally, at the Texas State Capitol in Austin, Texas. A federal judge has ordered Texas to suspend a new law that has banned most abortions in the state since September. The order Wednesday by U.S. District Judge Robert Pitman freezes for now the strict abortion law known as Senate Bill 8.[AP Photo/Stephen Spillman, File]

Abortions quickly resumed in at least six Texas clinics on Thursday after a federal judge halted the most restrictive abortion law in the U.S., but other physicians remained hesitant, afraid the court order would not stand for long and thrust them back into legal jeopardy.

It was unclear how many abortions Texas clinics rushed to perform in the 24 hours after U.S. District Judge Robert Pitman suspended the law known as Senate Bill 8, which since early September had banned abortions once cardiac activity is detected, usually around six weeks.

Prior to the blistering 113-page order late Wednesday, other courts had declined to stop the law, which bans abortions before some women even know they are pregnant.

"There’s actually hope from patients and from staff, and I think there’s a little desperation in that hope," said Amy Hagstrom Miller, president of Whole Woman’s Health, which operates four clinics in Texas. She said some of those clinics performed abortions Thursday but did not reveal how many.

"Folks know this opportunity could be short-lived," she said.

By all accounts, the ruling did not usher in a fast return to normal in Texas.

At least six Texas clinics resumed abortion services Thursday or were gearing up to offer them again, said Kelly Krause, spokeswoman for the Center for Reproductive Rights. There were roughly two dozen abortion clinics in Texas before the law took effect Sept. 1.

Planned Parenthood, the state’s largest abortion provider, did not say Thursday whether it had resumed abortions, stressing the ongoing uncertainty and the possibility of an appeals court quickly reinstating the law in the coming days. Fund Choice Texas, which covers travel expenses for women seeking abortions, was still receiving a high volume of calls Thursday from patients needing help to make out-of-state appointments.

The 20 calls were about the normal volume over the past month, executive director Anna Rupani said. She said her organization — which has helped Texas women travel as far away as Seattle and Los Angeles — was still discussing whether it would help a patient get an abortion in Texas even with a court injunction in place.

The Texas law leaves enforcement solely up to private citizens, who are entitled to collect $10,000 in damages if they bring successful lawsuits against not just abortion providers who violate the restrictions, but anyone who helps a woman obtain an abortion. Republicans crafted the law in a way designed to also allow retroactive lawsuits if the restrictions are set aside by one court, but later put back in place by another.

Republican Texas Attorney General Ken Paxton’s office has served notice of the state’s intent to appeal but had yet to do so Thursday.

"We are confident that the appellate courts will agree that every child with a heartbeat should have a chance at life," said Renae Eze, a spokeswoman for Republican Gov. Greg Abbott, who signed the law in May.

Hagstrom Miller said her Texas clinics called in some patients early Thursday who were on a list in case the law was blocked at some point. Other appointments were being scheduled for the days ahead, and phone lines were again busy. But some of the clinics’ 17 physicians were still declining to perform abortions, fearful they might be held liable despite the judge’s order.

Pitman’s order amounted to the first legal blow to Senate Bill 8, which had withstood a wave of earlier challenges. In the weeks since the restrictions took effect, Texas abortion providers said the impact had been "exactly what we feared."

In the opinion, Pitman took Texas to task, saying Republican lawmakers had "contrived an unprecedented and transparent statutory scheme" by trying to evade judicial review.

"From the moment S.B. 8 went into effect, women have been unlawfully prevented from exercising control over their lives in ways that are protected by the Constitution," wrote Pitman, who was appointed to the bench by former President Barack Obama.

"That other courts may find a way to avoid this conclusion is theirs to decide; this Court will not sanction one more day of this offensive deprivation of such an important right."

The lawsuit was brought by the Biden administration, which has said the restrictions were enacted in defiance of the U.S. Constitution. Attorney General Merrick Garland called the order "a victory for women in Texas and for the rule of law."

Abortion providers say their fears have become reality in the short time the law has been in effect. Planned Parenthood says the number of patients from Texas at its clinics in the state decreased by nearly 80% in the two weeks after the law took effect.

Some providers have said Texas clinics are now in danger of closing while neighboring states struggle to keep up with a surge of patients who must drive hundreds of miles for an abortion. Other women, they say, are being forced to carry pregnancies to term.

How many abortions have been performed in Texas since the law took effect is unknown. State health officials say additional reporting requirements under the law will not make September data available on its website until early next year.

Other states, mostly in the South, have passed similar laws that ban abortion within the early weeks of pregnancy, all of which judges have blocked. A 1992 decision by the U.S. Supreme Court prevented states from banning abortion before viability, the point at which a fetus can survive outside the womb, around 24 weeks of pregnancy.

But Texas’ version had so far outmaneuvered the courts because it leaves enforcement to private citizens to file suits, not prosecutors, which critics say amounts to a bounty.

The Texas law is just one that has set up the biggest test of abortion rights in the U.S. in decades, and it is part of a broader push by Republicans nationwide to impose new restrictions on abortion.

On Monday, the U.S. Supreme Court began a new term, which in December will include arguments in Mississippi’s bid to overturn 1973’s landmark Roe v. Wade decision guaranteeing a woman’s right to an abortion.

Last month, the court did not rule on the constitutionality of the Texas law in allowing it to remain in place. But abortion providers took that 5-4 vote as an ominous sign about where the court might be heading on abortion after its conservative majority was fortified with three appointees of former President Donald Trump.