Abortion rights are on the line at the Supreme Court in historic arguments Wednesday over the landmark ruling nearly 50 years ago that declared a nationwide right to end pregnancies and has forged one of the most enduring fault lines in American life and politics.

The stakes for the fate of the Roe v. Wade decision have never been greater as the most conservative court of the past 40 years weighs whether to uphold a Mississippi law that bans abortion after 15 weeks.

The state is asking the court to explicitly overturn the 1973 ruling. It’s possible the justices just uphold the Mississippi law and says nothing more, but abortion rights supporters say that would still effectively overturn the landmark decision.

Mississippi also is asking the court to overrule the 1992 ruling in Planned Parenthood v. Casey, which reaffirmed Roe. The arguments can be heard on the court’s website.

Supporters of both sides in the abortion debate filled the sidewalk and street in front of the court, their dueling rallies audible even from inside the building. Some carried signs reading "Her Body Her Choice" and "God Hates the Shedding of Innocent Blood." The court stepped up security measures, including closing off some streets around the building. 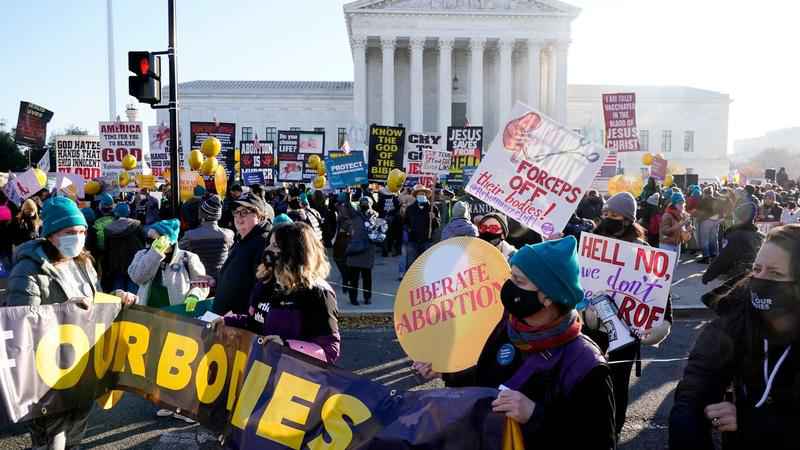 Abortion rights advocates and anti-abortion protesters demonstrate in front of the U.S. Supreme Court, Wednesday, Dec. 1, 2021, in Washington, as the court hears arguments in a case from Mississippi, where a 2018 law would ban abortions after 15 weeks of pregnancy, well before viability.[AP Photo/Jacquelyn Martin]

The case comes to a court with a 6-3 conservative majority that has been transformed by three appointees of President Donald Trump, who had pledged to appoint justices he said would oppose abortion rights.

The court had never agreed to hear a case over an abortion ban so early in pregnancy until all three Trump appointees — Justices Neil Gorsuch, Brett Kavanaugh and Amy Coney Barrett — were on board.

"The court has never revoked a right that is so fundamental to so many Americans," Solicitor General Elizabeth Prelogar told the court in arguing against overturning Roe vs. Wade on behalf of the Biden administration. "For a half century this court has correctly recognized that the constitution protects a woman’s fundamental right whether to end a pregnancy before viability."

But Chief Justice John Roberts, one of six conservatives on the nine-member court, said the court isn’t necessarily ruling on the right to an abortion. He says they’re considering a Mississippi law that prohibits abortions after 15 weeks , instead of 22 to 24 weeks under Roe.

"The argument would not be as strong, I think you’ll have to concede, given what we’re talking about which is not a prohibition. It’s a 15-week line," Roberts told Prelogar.

If the court does uphold the Mississippi law and essentially overturn Roe vs. Wade, Sarah Stoesz, president and CEO of Planned Parenthood North Central States, says many states will quickly move to ban or severely restrict abortions.

"Nebraska, Iowa are poised to roll back abortion rights," she told 5 Eyewitness News. "Even here in Minnesota legislators have attempted over the last number of years to establish severe abortion restrictions."

Minnesota abortion opponents demonstrated outside the federal courthouse in St. Paul in support of upholding the Mississippi law which could lead to big changes in state law here.

"The next step is… to make abortion not only illegal, but unthinkable and that is our goal," Moses Bratrud of the Minnesota Family Council told 5 Eyewitness News.

A month ago, the justices also heard arguments over a uniquely designed Texas law that has succeeded in getting around the Roe and Casey decisions and banning abortions in the nation’s second-largest state after about six weeks of pregnancy. The dispute over the Texas law revolves around whether the law can be challenged in federal court, rather than the right to an abortion.

Despite its unusually quick consideration of the issue, the court has yet to rule on the Texas law, and the justices have refused to put the law on hold while the matter is under legal review.

The Mississippi case poses questions central to the abortion right. Some of the debate Wednesday was over whether the court should abandon its long-held rule that states cannot ban abortion before the point of viability, at roughly 24 weeks.

More than 90% of abortions are performed in the first 13 weeks of pregnancy, well before viability, according to the federal Centers for Disease Control and Prevention.

Mississippi argues that viability is an arbitrary standard that doesn’t take sufficient account of the state’s interest in regulating abortion. It also contends that scientific advances have allowed some babies who were born earlier than 24 weeks to survive, though it does not argue that the line is anywhere near 15 weeks.

But the clinic argues that the court doesn’t normally assess constitutional rights based on how few people are affected, and that the justices shouldn’t do so in this case.

Joined by the Biden administration, the clinic also says that since Roe, the Supreme Court has consistently held that the "Constitution guarantees ‘the right of the woman to choose to have an abortion before viability.’"

Erasing viability as the line between when abortions may and may not be banned would effectively overrule Roe and Casey, even if the justices do not explicitly do that, the clinic says.

Justice Clarence Thomas is the only member of the court who has openly called for Roe and Casey to be overruled. One question is how many of his conservative colleagues are willing to join him.

Among the questions justices ask when they consider jettisoning a previous ruling is not just whether it is wrong, but egregiously so.

That’s a formulation Kavanaugh has used in a recent opinion, and Mississippi and many of its allies have devoted considerable space in their court filings to argue that Roe and Casey fit the description of being egregiously wrong.

"The conclusion that abortion is a constitutional right has no basis in text, structure, history, or tradition," Mississippi says.

The clinic responds by arguing that the very same arguments were considered and rejected by the court nearly 30 years ago in Casey. Only the membership of the court has changed since then, the clinic and its allies argue.

In its earlier rulings, the court has rooted the right to abortion in the section of the 14th Amendment that says states cannot "deprive any person of life, liberty, or property, without due process of law."

Same-sex marriage and other rights, based on the same provision but also not explicitly mentioned in the Constitution, could be threatened if Roe and Casey fall, the administration argues. Mississippi and its supporters dispute that those other decisions would be at risk.

A decision is expected by late June, a little more than four months before next year’s congressional elections, and could become a campaign season rallying cry.