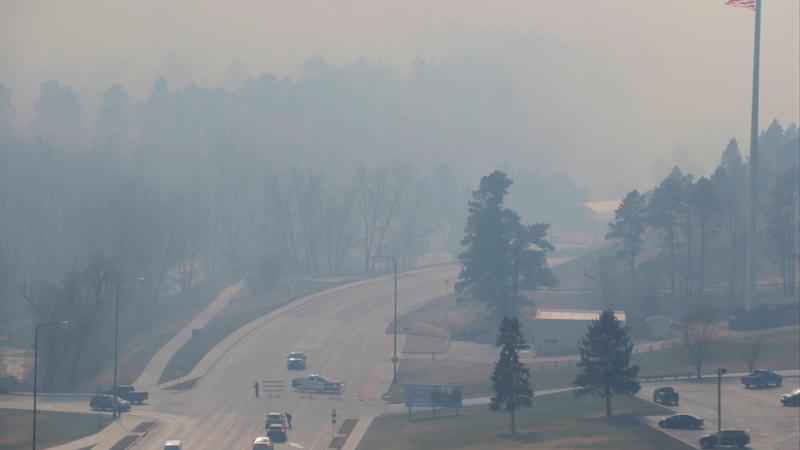 Smoke from a wildfire in the Black Hills of South Dakota blankets an area on the outskirts of Rapid City, S.D., where police set up a roadblock on Monday, March 29, 2021. There were at least three wildfires west that were burning west of Rapid City on a day when wind gusts ranged from 50 to 72 mph. The Pennington County Sheriff's Office said at least 400 homes had been evacuated and about 250 firefighters were battling the blaze that started near the town of Nemo. [Siandhara Bonnet/Rapid City Journal ]

High winds Tuesday hampered firefighters battling wildfires in the Black Hills of South Dakota that have forced the evacuations of more than 400 homes and closed the Mount Rushmore National Memorial.

Three separate wildfires were burning near Rapid City, with the largest near Schroeder Road in the Nemo area. That fire has burned nearly 3 square miles (7.7 square kilometers) and has not been contained at all. Two smaller blazes were burning southwest of Rapid City, near Keystone, leading Mount Rushmore National Memorial to close through at least Wednesday, as well as surrounding roads.

The Schroeder Road fire has crossed into two neighborhoods near Rapid City, the Pennington County Sheriff’s Office said Tuesday. At least one home has been destroyed after “an intense structure fight," officials said. No injuries have been reported.

South Dakota Gov. Kristi Noem, who traveled to Rapid City on Monday to oversee the response, said the Schroeder Road fire started on private property. “There have been losses and that is tragic,” she said.

On Monday, winds in the area reached as high as 81 mph (130 kph). Firefighters initially responding to the Schroeder fire found “a fast-moving ground fire in extreme fire danger condition,” officials reported. They immediately called for assistance from firefighters around the region.

Gusty northwest winds continued Tuesday across the western South Dakota plains, the National Weather Service in Rapid City tweeted. Winds of 30 to 40 mph with gusts of 55 mph were expected, the weather service said.

Pennington County Sheriff Kevin Thom said his family was among those who were evacuated.

“I watched a neighbor’s house go up in flames. So it touches all of us," Thom said at a news conference.