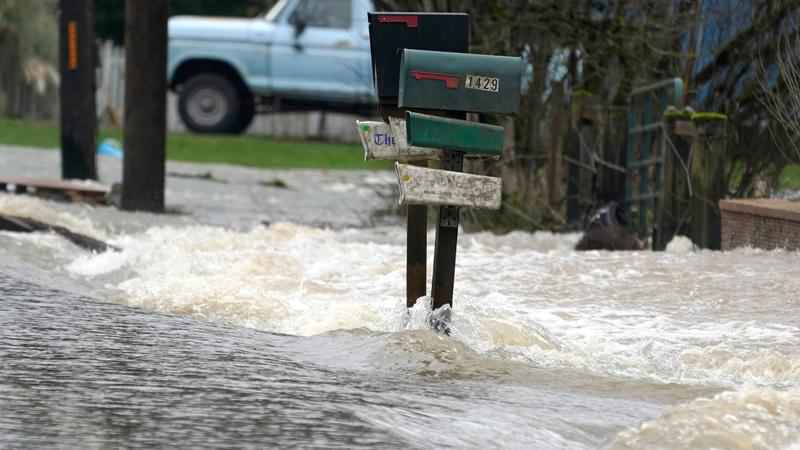 Water from the Skookumchuck river flows over N. Peal St. in Centralia, Wash., Friday, Jan. 7, 2022. Rain and snow continued to fall across the Pacific Northwest Friday, causing flooding and concerns about avalanche danger in the mountains.[AP Photo/Ted S. Warren]

At least one person was missing and presumed dead as snow turned to rain and deluged the Pacific Northwest on Friday, causing flooding, landslides and avalanche danger in the mountains.

A 72-year-old man never returned after leaving his residence to move his car to higher ground on Friday morning west of Olympia, Washington, in Cosmopolis, according to Grays Harbor Undersheriff Brad Johansson.

The man’s residence was on a road that was flooded and authorities fear his vehicle was swept into floodwaters down a steep bank next to his driveway, Johansson said.

Snow and rain forced the closure of parts of Washington state’s two major highways — Interstate 90 and Interstate 5 — with flooding that also swamped roads throughout Western Washington and Oregon.

In southwestern Washington’s Lewis County, a 20-mile (32-kilometer) stretch of Interstate 5 had been closed in both directions south of Chehalis because of flooding from the Chehalis River. All lanes of Interstate 5 in that area reopened Friday afternoon.

And part of one of the only other roads crossing the state, State Route 14 on the Washington side of the Columbia River, closed for several hours on Friday because of a fatal crash near Lyle, Finn said.

Near Stevens Pass northeast of Seattle, the city of Leavenworth declared a state of emergency and asked for National Guard help after 3 feet (91 centimeters) of snow fell in 24 hours.

City leaders are concerned about the weight of snow on buildings and homes, KCPQ-TV reported.

In Seattle’s Magnolia neighborhood, firefighters responded to a home that slid down a hillside. Live video from KING-TV appeared to show crews rescuing a person and working to extinguish a fire just outside the home.

A man trapped in the home’s basement was extricated, according to the Seattle Fire Department. A woman escaped on her own while one dog died and another is missing, firefighters said.

Dozens of watches and warnings were in effect in Washington and Oregon, including a flood warning for the northern Oregon Coast following huge amounts of rainfall.

The National Weather Service said Hoquiam, Washington, in Grays County received a record 5.78 inches (14.68 centimeters) of rain Thursday. Other areas saw nearly half of the rain they’d expect to see for the month of January in one day, according to the weather service.

Southwest Washington experienced its worst flooding in a decade and some rivers crested at more than 18 feet (5.5 meters) late Thursday, the National Weather Service said.

East of Seattle on Friday, parts of downtown Issaquah were closed after Issaquah Creek sent water over the roads. Some homes flooded and at least one apartment building was evacuated after the creek spilled over its banks and into the parking lot under the complex, KIRO-TV reported.

In Centralia and around Thurston County, streets were flooding Friday and Washington National Guard members were helping with filling sand bags and other requests, the guard said on Twitter.

In northwest Washington, snow fell in Bellingham while roadways flooded throughout Whatcom County. Exceptionally high tides and winds were causing coastal flooding around homes in Birch Bay, according to the Whatcom County Sheriff’s Office.

In northwest Oregon, coastal flooding after heavy rains disrupted communities. Astoria got more than 4 inches (10.1 cm) of rain Thursday, breaking a record for rain on that date set in 1914.

The nearby city of Warrenton declared a state of emergency due to widespread flooding and school districts in Astoria, Warrenton, Knappa and Seaside canceled classes Friday.

In Oregon, Interstate 84 reopened after a landslide closed almost 50 miles (80 kilometers) of the highway from Troutdale to Hood River on Thursday.

Forecasters say the rains should subside over the weekend.