Paul McGuire Grimes, creator of Paul’s Trip to the Movies, gives us his review of Cobra Kai, Honk for Jesus, Save Your Soul, and Elvis.

Season 5 marks a new era for Cobra Kai under Sensei Terry Silver, played ferociously by Thomas Ian Griffith. He has a new dojo opening in Encino building an empire under his tutelage. Ralph Macchio’s Daniel sees them as a bigger threat than ever before and brings in old pal Chozen to help with the situation despite closing the Miyagi-Do dojo. Meanwhile, Miguel starts the season in Mexico looking for his father while Johnny and Robbie work on their father/son relationship. Don’t count out Kreese. He may be in jail, but that doesn’t mean he’s disconnected from what’s going on with Cobra Kai.

-The hit Netflix series Cobra Kai is back and season five is one of the best seasons to date. 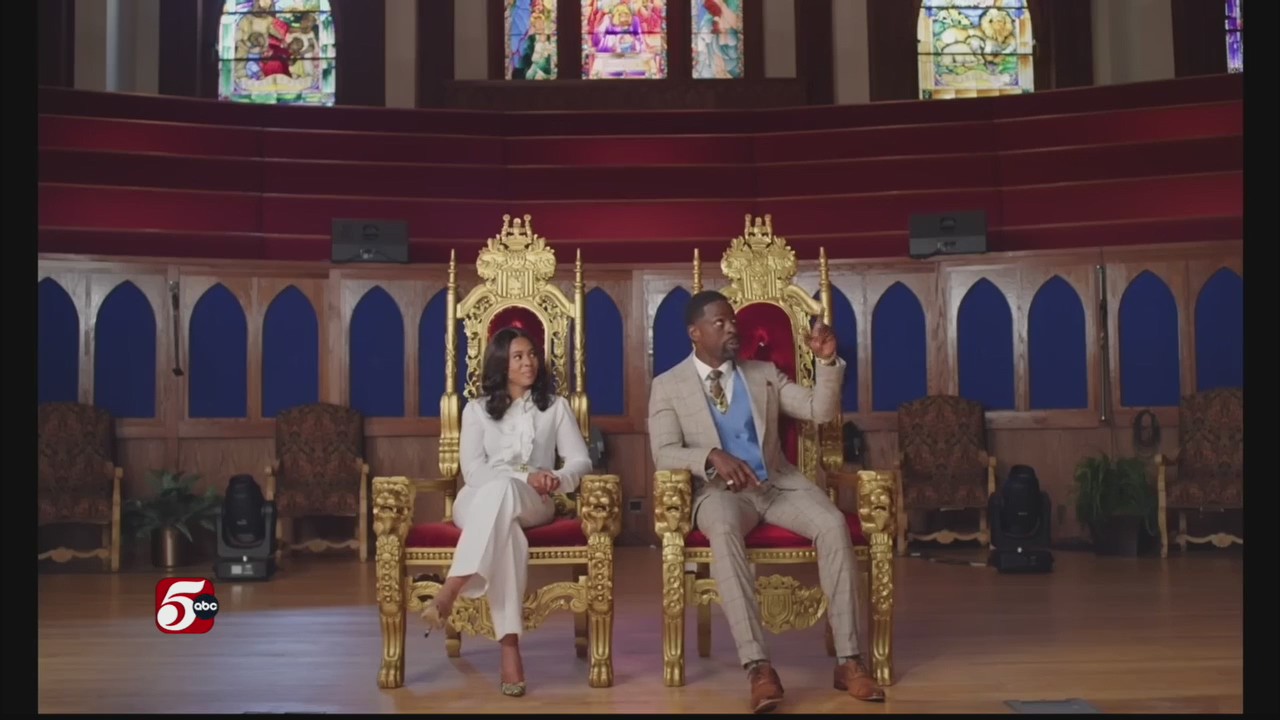 -The fifth season takes place over the summertime, which gives the series a fresh new look right out of the gate and doesn’t feel like a continued retread of the drama within the walls of the high school or dojo.

-The writing team handles this big cast well narrowing in on select cast members to tell select stories while still showcasing the larger team spirit of Miyagi-Do despite the dojo being closed. There’s a unified front with many of these characters and a strong, focused storytelling without feeling too repetitive.

-We see how the fallout from last season’s tournament has affected these characters in different ways. There’s a crisis of identity, faith, and morals and if it’s all worth it.

– There are big changes instore for Johnny, and William Zabka is still in prime form garnering the most laughs this season with the antics he finds himself in.

-This season features the return of more legacy Karate Kid characters including Mike Barnes, but the season is all about Terry Silver. The writers waste no time making him the ultimate villain of the season, and Thomas Ian Griffith is an absolute blast to watch diving into the wicked, diabolical nature of Silver. He makes Kreese look innocent, and that’s saying something.

-Cobra Kai Season 5 continues the energy, fun, and laughs that we’ve seen in previous seasons without feeling too worn down yet. They’ve managed to keep this a successful reboot catering toward the entire family from those who grew up watching The Karate Kid and the new generation of fans.

HONK FOR JESUS. SAVE YOUR SOUL. (Peacock)

The new satire Honk for Jesus. Save Your Soul. takes you inside the scandalous walls of a Southern Baptist megachurch. Sterling K. Brown leaves behind his dramatic turn in This is Us and flexes his comedic chops as Pastor Lee-Curtis Childs who is hoping for a comeback. Regina Hall plays his wife Trinitie, the First Lady of their congregation. Scandal has rocked their church and now with the help of a documentary crew, they are hoping for a revival to rehab their tarnished images in time to open for Easter Sunday. The film also stars Conphidance and Nicole Beharie as a rival pastor and first wife trying to grow their congregation in the wake of the Childs’ scandal.

-From the very beginning, Regina Hall and Sterling K. Brown have a clear handle on capturing the big personalities within these characters. Brown easily slides into comedy with the charm and presentational skills needed for this kind of preacher who think he’s above the law or ridicule. He sells the over-the-top antics of a preacher who wants you to think he’s been moved and saved by the lord.

-Regina Hall is a comedy queen, and she is in prime form making all it all look effortless. It’s not a caricature, and she’s still able to find that depth and arc with Trinitie. It’s the vulnerable moments Hall lets us in on that remind us she’s a deeply hurt person but still has a job to do.

-Writer/Director Adammo Ebo is clearly pulling from her own experiences growing up in these megachurches as she has a specific eye to detail in not only the physical appearance of the church from the thrones at the alter to the armored knight by the lectern to the discussion of designer bonnets to be worn that are holy and sexy all at once.

-Ebo is quick to point out the hypocrisy at hand not just with these Southern Baptist megachurches but to many of these large denominational groups.

-The mockumentary style may feel a little overdone, but it works for this kind of satire to see how characters like this act very differently when the camera is off versus when they are in front of their congregation or on camera. It’s all an act for some and that’s what Adammo Ebo is getting at with this film.

-As a satire, it does veer on the lighter, funnier end especially with the desperate attempts we see Trinitie take to control the narrative. It’s not as biting or dark as other satires of late like Not Okay or Don’t Look Up.

-Regina Hall and Sterling K. Brown are both worth watching regardless of your take on organized religion and megachurches.

It takes an extravagant vision to capture the life and magic of Elvis Presley on screen. Director Baz Luhrmann embeds his flashy aura into Elvis Presley’s life to an eye-popping delight with Elvis. The opening sequence practically mirrors that of Romeo+Juliet with a frenzied narration and Tom Hanks’ Colonel Tom Parker on his death bed recounting how he made Elvis famous and that there would be no Elvis without him. He wants to set the record straight in this fever dream. Parker was working as a music producer on the carnival circuit when he heard the sounds of a young Elvis Presley on the radio. He’s played here by the remarkable Austin Butler. Presley had a sound and image all his own inspired by the Black community and music he grew up around. Parker knew he found his golden ticket in Presley. The rest as they say is history but the relationship between the two was toxic as Presley found himself thrust into controversy with someone who couldn’t be trusted.

-There’s something to be said about a director who knows his vision as a filmmaker and is completely unapologetic about it. Elvis is pure Baz every step of the way from the high energy pacing, re-imagined music choices, and flashing split screens at any given point.

-Luhrmann uses the traditional biopic structure going from one city to the next as a musical collage for the first half of the film with updated covers of classic Elvis tunes as transition music. He wisely pays tribute to the Black culture that inspired Elvis and reminds us of the blatant racism of the time.

-It may seem like Luhrmann is attempting to cover a lot of ground as Presley led a full life in just 42 years, but Luhrmann steadies the film in the back half once he meets Priscilla and his career slows down.

-Luhrmann keeps this a positive interpretation of Presley’s life as a showman and entertainer and wisely casts the relatively unknown Austin Butler to portray him. Butler nails Presley’s husky voice and physical mannerisms like his wiggle with great control always humanizing Presley every step of the way.

-Tom Hanks has played many real-life figures, but it’s a little jarring seeing him as this cartoony villain buried under heavy prosthetics and a fat suit. It’s a stretch for him as he’s essentially playing a carnival barker type of role.

-The is essentially the story of two big personalities and their clashing ideas of what they wanted out of Elvis’ career.