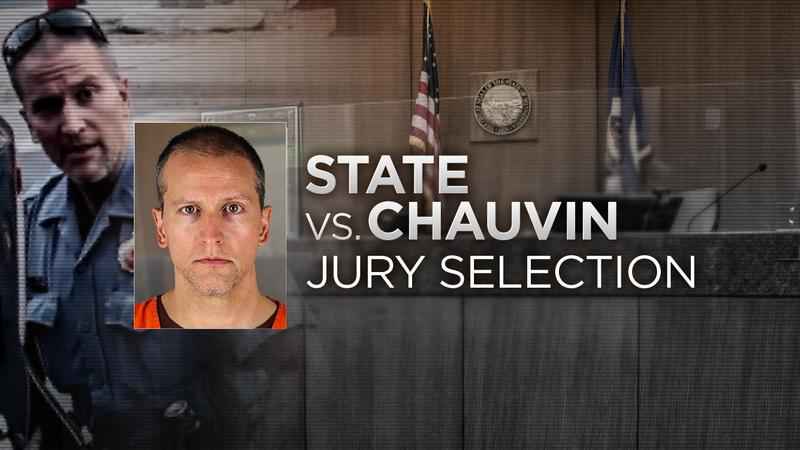 Judge Peter Cahill, who is presiding, has estimated jury selection will take three weeks, with opening statements to follow.[KSTP-TV]

Juror No. 52 will serve on the jury. He becomes the eighth person selected for the jury. Six seats remain, with two of them serving as alternatives. This juror is described to be a Black man in his 30s.

Derek Chauvin’s attorney, Eric Nelson, has asked for a continuance and renewed a motion for a change of venue.

Update: Derek Chauvin’s attorney asks for a continuance and renews motion for change of venue—due to City of Minneapolis $27M civil settlement with #GeorgeFloyd family.

Questioning for Juror No. 52 continues. He said he loves sports and music, and isn’t concerned for his safety in this trial if he were to serve on the jury.

He is noted to be a youth sports coach, where he has dealt with sorting out conflicts amongst his players and the players’ parents.

Regarding the case, he knows "many basics" of it, including two autopsies being done on Floyd. He has a neutral opinion for Chauvin and Floyd. He says he doesn’t think Chauvin had the intention to end Floyd’s life, but he was curious as to why the 3 other former officers did not intervene. The man says he has seen "about a minute" of the Floyd video.

"Why didn’t the other officers stop Chauvin?" he asked in court, adding that even if Chauvin didn’t mean to do what he did, someone still died.

The man says he witnessed a Minneapolis police officer "slam down someone for not cooperating quickly enough and use more force than was necessary." He adds he was walking by and acknowledges he doesn’t know the whole story from that isolated incident.

Nelson noted that his client does not have to testify to Juror No. 52.

He said he doesn’t know enough information on defunding the police to form an opinion on it. Regarding the Black Lives Matter movement, he said he has a favorable opinion of them.

Potential Juror 52 answered questionnaire that they somewhat disagree with defunding the police – “I don’t quite know what defunding would look like”.

"Black lives just want to be treated as equals and not killed or treated in an aggressive manner simply because they are Black," he answered in the questionnaire. He further states that he believes Black Lives Matter is a statement, doesn’t see them as a movement or organization.

He also believes Blue Lives Matter was created to refute Black Lives Matter. He said he doesn’t think there should be a competition.

Chauvin’s attorney asked about why checked “yes” they want to serve on jury.

Juror 52 calls this is a historic case, says they’re able to set aside any bias if serving on jury.

Juror No. 52 says he does not judge those who struggle with a drug abuse issue.

"That’s just something they’re struggling with… but they’re still like anybody else," he said to the state prosecutor.

Juror No. 51 has been dismissed due to her being honest with the judge in saying recent developments seen on the news will not change her opinion on the case going forward.

Cahill excuses Juror 51 after they indicate being unable to overcome everything they know about the case in addition to the settlement news.

After a short recess to get jurors finished with orientation, questioning begins for the day. Juror No. 51 will be the first juror addressed.

She noted that she had heard the news of the Floyd family settlement on Friday and that it has changed her opinion on the case.

She says she can’t set aside her judgments for the trial.

Attorneys for each side and Judge Peter Cahill went over several motions Monday morning, but the highlight came shortly before the court took a brief recess ahead of the start of jury selection for the day.

Chauvin’s attorney Eric Nelson said he was "gravely concerned" by the timing of the city’s $27 million settlement with George Floyd’s family on Friday and said it could possibly taint the juror pool. Nelson discussed several possible measures to help ensure a fair jury, such as offering the defense more strikes and sequestering the jury.

Cahill said he’d take the requests under advisement and would grant the motion to question the jurors who have already been picked to see whether they have read anything about the settlement and if that changed their opinions.

Jury selection is entering its second week in the trial of a former Minneapolis police officer who is charged in the death of George Floyd.

Seven jurors have been chosen so far to hear evidence in Derek Chauvin’s trial – five men and two women.

Four are white, one is mixed race, one is Black and one is Hispanic.

Attorneys will continue the process of questioning jurors one-by-one on Monday. They need to pick 14 people – 12 will deliberate and two will be alternates.