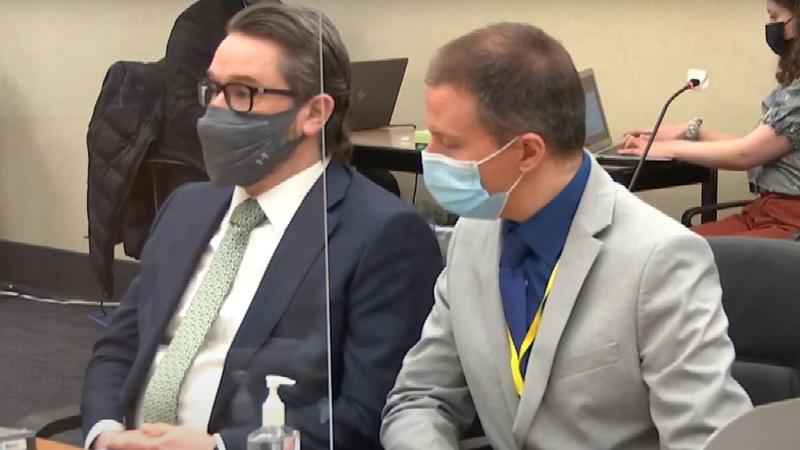 The court is in session for the day. Judge Peter Cahill is reading off jury instructions before closing arguments begin.

Judge Cahill is now going through the charges.

He’s explaing murder in the second degree. He says jurors must find multiple elements were proven in court to find him guilty of this charge.#DerekChauvinTrial

"He was trapped with the unyielding pavement underneath him, as unyielding as the men who held him down, pushing him, a knee to the neck, the knee to the back, twisting his fingers, holding his legs for nine minutes and 29 seconds," he stated.

"A grown man, crying out for his mother. A human being," Schleicher said.

He noted the motto of the Minneapolis Police Department is to protect with courage and to serve with compassion. "Facing George Floyd that day, no courage was required and none was shown," Schleicher noted.

"He had no pulse. He was not breathing. He was not responsive, and the defendant had to know what was right beneath him," the state prosecutor said.

"It is a prosecution of the defendant, not the police. There is nothing worse than a police officer who violates training and policy," he stated. He reiterated the department’s motto once more.

"The defendant was trying to win. He wasn’t going to take a challenge to his authority … and George Floyd paid for it with his life," he continued.

"George Floyd is not on trial here. You’ve heard some things about George Floyd, that he struggled with drug addiction, that he was being investigated for allegedly passing a fake $20 bill … but he is not on trial. He didn’t get a trial when he was alive."

The Associated Press contributed to the following.

Attorneys in the trial of a former Minneapolis police officer charged in connection with George Floyd’s death will make their closing arguments Monday.

Each side will be seeking to distill three weeks of testimony into a compelling argument that persuades jurors to deliver their view of the right verdict.

For prosecutors, it’s that Derek Chauvin recklessly squeezed the life from Floyd as he pinned him to the pavement for more than 9 minutes in a clear misuse of force.

For the defense, it’s that Floyd died of a bad heart and made himself more vulnerable by abusing drugs and resisting officers.

The jury will be sequestered during deliberations, meaning they will stay in a hotel overnight until a verdict is reached.

Last week, Judge Peter Cahill told the jury to "plan for long and hope for short" for the deliberation process.