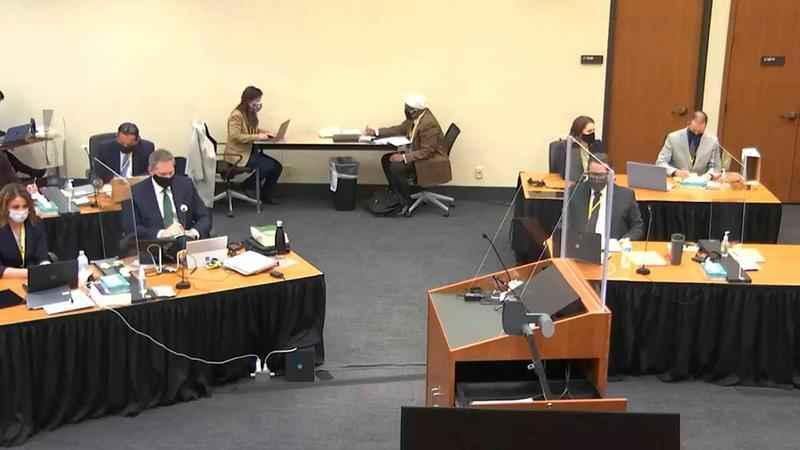 In this image taken from video, participants listen in court as Hennepin County Judge Peter Cahill presides over jury selection, Wednesday, March 17, 2021, in the trial of former Minneapolis police officer Derek Chauvin at the Hennepin County Courthouse in Minneapolis, Minn. Chauvin is charged in the May 25, 2020, death of George Floyd.[Court TV]

Dr. Rich has been excused from the witness stand. The court has gone into recess until 1:30 p.m.

The court has reconvened. The defense has started their cross-examination of Dr. Rich.

He confirmed to Nelson he is not a forensic pathologist. Nelson asked Rich if people who have a 90% blockage and die is a "pretty common occurrence," to which Rich disagreed.

"Everyone dies eventually but not from the 90% blockage," he said, adding about the hypothetical question, "… undoubtedly people who have died from coronary events with 90% blockages or without blockages."

Nelson asks what is a safe dose of methamphetamine.

Dr. Rich: I would never consider any illicit drug to be off the street that’s not prescribed by a physician to be safe. #DerekChauvinTrial

Nelson asked whether Floyd would have survived if he "had simply gotten in the back of the squad car?"

"Had he not been restrained in the way in which he was, I think he would’ve survived that day," Rich replied.

The court has taken a 20-minute recess.

The first witness is called to the stand by the state on Monday. Dr. Jonathan Rich, a cardiologist at Northwestern Memorial Hospital in Chicago, is the first to address questions.

He says he specializes in cardiology, but has a sub-specialty in advanced heart disease focused on heart failure and heart transplants.

The state has called Dr. Jonathan Rich as its next witness, he is a cardiologist at Northwestern Memorial Hospital and professor.

Rich says he has experience working with cardiac patients who died from low oxygen.

"Having low oxygen levels is not uncommon, a lot of different disease processes can cause it, and low oxygen levels can be very detrimental," Rich said. He adds he also works closely with cardiac pathologists because he often takes biopsies from the inner lining of the heart.

Dr. Rich says the cardiac pathologist he works with asks for “clinical information” to “diagnose and interpret” what he looks at under the microscope.

"In this case, Mr. Floyd died from a cardiopulmonary arrest. It was caused by low oxygen levels … induced by the prone restraint and positional asphyxiation he was subjected to," Rich said.

He told the court he can state with a "high degree of medical certainty" that Floyd did not die from a primary heart condition or a drug overdose.

He also said Floyd had three medical issues: hypertension/high blood pressure, anxiety and appeared to have struggled with substance abuse. Rich adds that there was no evidence to suggest that Floyd had any negative heart condition.

Rich says he has looked at videos of the incident to see how Floyd looked, whether he was talking, what he was saying and how he was walking.

"From his initial encounter, remembering particularly when he was asked to get out of his car, he appeared fearful … I saw no indicators at that time that he was suffering from low oxygen," Rich stated. He says once Floyd was restrained on the ground, "my observations were that he was restrained in a life-threatening manner."

Rich described prone position, position of knees on Floyd, hands handcuffed behind his back. #DerekChauvinTrial

Rich stated that Floyd had died a "gradual" death. He says there was no evidence of a sudden cardiac death. He did not find any evidence of a heart attack on Floyd’s autopsy.

"I saw no complete blockages, there were narrowing," Rich said, but added there was no description of narrowing of "the main coronary artery."

Rich explained that Floyd’s heart was "likely mildly thick and mildly enlarged, which is an expected finding in somebody that has high blood pressure … that is a normal response, the muscle is getting stronger … allowing the heart to work, and work well."

He also reiterated that drugs were no a causation of death regarding Floyd. He called his death "absolutely preventable."

Dr. Rich says CPR should have been started immediately when an officer noted Floyd’s pulse and when an officer asked if Floyd should be turned on his side. #DerekChauvinTrial pic.twitter.com/HdNajRgUrp

The court convenes without the jury to address some motions to begin Monday’s session.

"Well, the court concern, we’re pretty clear before is that motions in limine, we’re not going to call every cop and ask him, ‘what would you have done differently and basically I think the state has almost done that," Judge Peter Cahill said Monday morning.

Schleicher also addressed "the phenomenon of auditory paranoia." This relates to when the defense asked BCA agent Reyerson if George Floyd said "I ate too many drugs." Schleicher said their expert has an expertise on the topic of auditory paranoia. Nelson said it’s for the jury to decide what was said. The judge agreed, saying he was surprised that the state didn’t object to Nelson’s question.

"I mean I have experience in listening to a lot of body-worn cameras, that doesn’t make me an expert," Cahill said.

Nelson said the state does not intend to offer Hall immunity for his statements. He brought up a prior case in which a witness also invoked their Fifth Amendment privileges and the state refused immunity.

"So in the course of this statement, he makes several incriminating statements, outside of this particular incident. As it pertains to whether he provided Mr. Floyd with the drugs, he denies it," Nelson said regarding Hall. "I think that the state has taken the position that Mr. Hall’s testimony or his statement was not credible to these investigators. They have the ability to … offer him immunity … if their position is that the controlled substances played no part in this case."

Cahill said he will take it under advisement and will give them an answer at 1 p.m. before they bring the jurors back regarding the Hall situation.

Additionally, Nelson also asked the court to sequester the jury due to an incident that left one dead in Brooklyn Center Sunday night.

"This incident last night, highlights, and I think brings it to the forefront of the jury’s mindset that a verdict, in this case, is going to have consequences," Nelson said, asking the jury be voir dire again to ask if they know about what happened yesterday, if it will impact their decision-making process and that they may be sequestered.

Cahill denied the motion to sequester the jury, noting it is a different case. Cahill said that he will not sequester the jurors until next Monday, when he anticipates closing arguments will begin.

The Associated Press contributed to the following.

The trial of a former Minneapolis police officer charged in George Floyd ‘s death enters its third week Monday, with the state nearing the end of a case built on searing witness accounts, official rejections of the neck restraint and expert testimony attributing Floyd’s death to a lack of oxygen.

Derek Chauvin, 45, is charged with murder and manslaughter in Floyd’s May 25 death. Police were called to a neighborhood market where Floyd was accused of trying to pass a counterfeit bill. Bystander video of Floyd, pinned by Chauvin and two other officers as he cried "I can’t breathe" and eventually grew still, sparked protests and scattered violence around the U.S.

Chauvin attorney Eric Nelson argues that Floyd’s death was caused by drug use and underlying health conditions including a bad heart. He’s expected to call his own medical experts after the prosecution wraps its case, expected early this week. Nelson hasn’t said whether Chauvin will testify.

Prosecutors say Floyd was pinned for 9 minutes, 29 seconds. Police officials testified that while officers might sometimes use a knee across a person’s back or shoulder to gain or maintain control, they’re also taught the specific dangers for a person in Floyd’s position — prone on his stomach, with his hands cuffed behind him — and how such a person must be turned into a side recovery position as soon as possible.

Prosecutors called a string of medical experts to testify that Floyd died due to a lack of oxygen, led by Dr. Martin Tobin, a lung and critical care specialist who walked jurors through graphics and charts and had them feel their own necks as he analyzed evidence from videos.

Tobin testified that other factors, not just Chauvin’s knee, made it hard for Floyd to breathe: officers lifting up his handcuffs, the hard pavement, his turned head and a knee on his back. He pinpointed the moment when he said he could see Floyd take his last breath — and said Chauvin’s knee remained on Floyd’s neck another 3 minutes, 2 seconds.

"At the beginning, you can see he’s conscious, you can see slight flickering, and then it disappears," Tobin said as he highlighted a still image from police body-camera video. "That’s the moment the life goes out of his body."

Nelson sought to raise doubt about the prosecution’s case. During testimony about Chauvin’s use of the neck restraint, he sought to point out moments in video footage when he said Chauvin’s knee didn’t appear to be on Floyd’s neck. And he again questioned officers about how a gathering crowd might affect officers’ use of force.

A potential gap in prosecutors’ case appeared Friday when Hennepin County’s chief medical examiner, Dr. Andrew Baker, testified that the way police held Floyd down and compressed his neck "was just more than Mr. Floyd could take" given his heart issues.

Baker didn’t attribute Floyd’s death to asphyxia, as several prosecution medical experts did. And while he said that neither Floyd’s heart problems nor drugs caused his death, he agreed with Nelson that those factors "played a role" in the death.

Ted Sampsell-Jones, a law professor at Mitchell Hamline School of Law in St. Paul, Minnesota, said Baker’s testimony might raise a reasonable doubt about cause of death, but that the legal standard for establishing causation is quite low. The state has to show only that Chauvin’s conduct was a substantial contributing cause.

"If the state had to show that Chauvin’s conduct was the sole or even primary cause of death, the case would be in real trouble," Sampsell-Jones said.