Friday AM Chauvin trial: Forensic pathologist says cause of death for Floyd is ‘physical restraint, compression’ 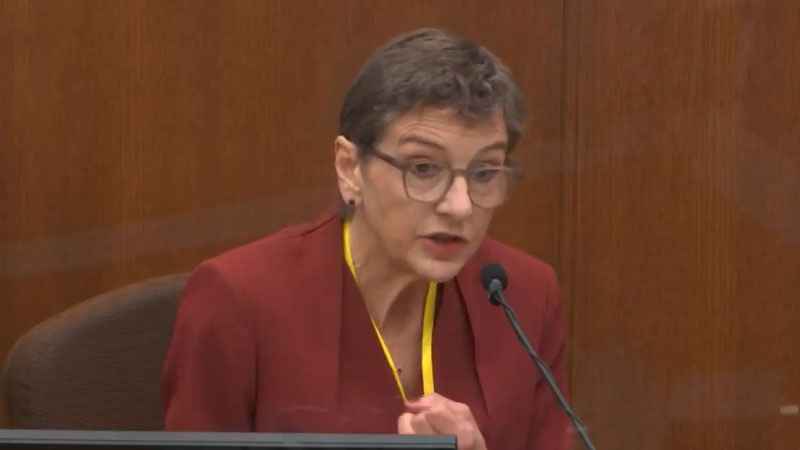 WARNING: Some of the video and images via the player above may be difficult to watch.

The court is back in session.

They’re now showing this exhibit which is only being shown in court for demonstrative purposes.

It’s the guide for manner of death classification. #DerekChauvinTrial pic.twitter.com/eo6wwYHhtt

Since the cause of death was ruled a homicide, Thomas believes that alone rules out any possibility of the death being caused by an accidental drug overdose.

The defense starts cross-examination of this witness.

Nelson turns his questioning about Floyd’s heart. Dr. Thomas says the weight was 540 grams and says "it’s a slight enlarged heart." She says by some categories "that heart would not be considered enlarged" because of different standards. #DerekChauvinTrial

Nelson asked about the direction of those abrasions seen on Floyd and how they could have been caused.

"Not all of those abrasions necessarily occurred while Mr. Floyd was in the prone position, right," Nelson asked Thomas. She answered it was "hard to answer."

Nelson objected & Cahill had this answer stricken from the record. #DerekChauvinTrial https://t.co/3q2tuNG4lG

Nelson: So the fact that Methamphetamine is at a lower toxicological standard doesn’t somehow make it safe.
Dr. Thomas: Right.
N: It doesn’t exclude the possibility that it could increase the heart rate.
DT: It could, or not. #DerekChauvinTrial

After Nelson finished his questioning, Blackwell took over to redirect. He asked Thomas if she remembers the hypotheticals Nelson asked.

"Aren’t those questions, a lot like asking: this is Lincoln, if we take John Wilkes Booth out of this…"

Nelson: Would you, as a physician, prescribe methamphetamine, to a person who has a 90% or 75% occlusion to his or her heart?
Cahill: You may answer if you have an opinion in that regard.
Dr. Thomas: Yeah, I don’t have an opinion. #DerekChauvinTrial

Judge Cahill has issued a 20-minute break. They will reconvene around 11:05 a.m.

Nelson objected to the introduction of an exhibit that explains how medical examiners determine the manner of death. He believed "it would confuse the jury between the medical definition in the legal definition."

Cahill said he will allow it as a demonstrative exhibit, meaning it will only be shown in court and won’t go back with jurors to make their decision.

Thomas noted she conducts "medical legal death investigations" and is also trained to certify the cause and manner of death.

"I think a lot of people assume it’s all about the autopsy … and that’s really just a tiny part of the death investigation," Thomas said.

She further explained they look at medical, social and family history, events around the time of death, physical exam, toxicology, and other factors.

"When I’m talking about terminal events, I’m talking about what happened in the period of time around their deaths … for example, he was out shoveling snow, he came in, clutched his chest, and fell over," she stated.

Dr. Thomas noted in court she is not being paid for her appearance on the stand. She confirmed that the state reached out to her.

"I knew this was going to be important … I felt like I had something to offer and I wanted to do what I could to help explain what I think happened."

She said Dr. Baker, the Hennepin County Medical Examiner at the time of Floyd’s death, did his fellowship at Hennepin County when she was on staff. They later worked together and she considers him a friend. Thomas said she has not spoken about the case with him.

"Well the use of videos is unique. In this case, certainly as medical examiners. We use videos, but there’s never been a case that I’ve been involved with that had videos over such a long timeframe, and from so many different perspectives," she said.

She agrees with Baker’s assessment of the cause of death. He stated it was caused by asphyxia or low oxygen.

"This is a death where both the heart and lungs stopped working. And the point is that it’s due to law enforcement subdual restraint and compression," Thomas said.

She reiterates that the cause of death was determined by the officers’ actions.

Thomas also said the autopsy report is great "for ruling things out."

Dr. Thomas says the autopsy report is great "for ruling things out."
-No evidence of lung disease
-No injuries/broken bones in neck
-No stroke which shows his blood pressure wasn’t "so high."
-No Aneurysm
-"He didn’t rupture his heart" #DerekChauvinTrial

Thomas says from all the videos she felt comfortable ruling the following out: not a sudden death caused by a cardiac arrhythmia which she says would be quick; and not a fentanyl overdose who "peacefully stops breathing."

"There’s a movement that I believe is what’s called an anoxic brain reaction … looks like kind of a twitch. It’s something that the body does when the brain no longer has enough oxygen," Thomas explained.

Dr. Thomas says "one of the things we use this other contributing conditions for is to list disease processes or drugs that are present at the time of death, but…that we don’t believe directly contributed to the COD."

Thomas ruled out drug overdose as a cause of death regarding Floyd. He opinion is based on her review of video, records and her experience/knowledge.

She said there is no autopsy test for low oxygen. She used the examples of hanging or "manual strangulation" that have physical signs of low oxygen, but those are different mechanisms.

"Sometimes in cases … we see specific findings related to the cause," Thomas said.

So the exhibits that are about to be shown will not be broadcasted to us. Judge Cahill says they’re going "old school" and handing out paper. He does not offer up an explanation. #DerekChauvinTrial pic.twitter.com/HElpSnSwkT

The court is showing autopsy photos to the jury, defense, Thomas and Judge Peter Cahill. The photos are not being shown to the public.

"This is a photograph of Mr. Floyd’s face, and it shows some facial injuries," Thomas said, looking at one of the photos presented to her.

Dr. Thomas says the primary mechanism is asphyxia/low oxygen, the secondary is physiologic stress, but "ultimately the cause of death is the physical restraint & compression." #DerekChauvinTrial

Friday, in the trial of former Minneapolis police officer Derek Chauvin, the medical examiner who performed the autopsy on George Floyd is expected to take the stand.

It comes a day after experts analyzed Floyd’s breathing in the case, coming to a conclusion a lack of oxygen, not drugs, caused his death.

Dr. Martin Tobin volunteered his time as a witness. He is a lung and critical care doctor.

Tobin testified Floyd died from a lack of oxygen. During one key moment, he explained to the jury how it reportedly happened, using video taken during Floyd’s arrest.

"You can see his eyes, he’s conscious. Then, you see that he isn’t. That’s the moment the light goes out of his body," Tobin said.

Tobin showed illustrations that he helped create to further explain Floyd’s death. He detailed how the combination of the prone position, handcuffs and knees on the neck and back were all factors.

Tobin’s testimony was supported later in the afternoon with the state’s first paid witness, Dr. William Smock, who is an emergency medical doctor.

"Mr. Floyd died from positional asphyxia which is a fancy way of saying he died because he had no oxygen left in his body," Smock said.

The third medical expert told the jury he tested a blood sample from Floyd at the request of the Hennepin County Medical Examiner. He said meth and fentanyl were found in Floyd’s system but the meth level was similar to a single-prescribed dose.