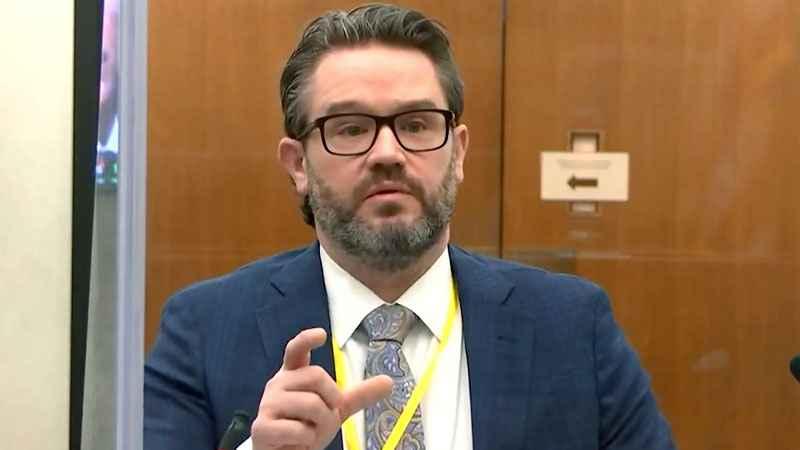 In this image taken from video, defense attorney Eric Nelson speaks to Hennepin County Judge Peter Cahill during pretrial motions, prior to continuing jury selection in the trial of former Minneapolis police officer Derek Chauvin, Thursday, March 11, 2021, at the Hennepin County Courthouse in Minneapolis, Minn. Chauvin is accused in the May 25, 2020, death of George Floyd.[Court TV/Pool via Pool]

Cahill excuses the witness and sends the jury home for the day.

Cross-examination of the witness continues by the state.

Schleicher is asking about bystanders that were on the scene. Brodd stated earlier that a growing crowd could create tension for officers while at the scene.

Schleicher plays another section of body camera footage, "You saw some other bystanders, correct?"

Schleicher, "And those bystanders appeared to be a ways away from officer Thao, correct?"

Brodd says they were on the sidewalk. pic.twitter.com/h0XClMgDy2

Schleicher, "He said he was you’re cutting off his breathing, right?"

Schleicher, "Fair to say he was expressing concern?"

He also said he doesn’t believe Chauvin and the other officers used deadly force when they pinned Floyd on his stomach, with his hands cuffed behind his back and Chauvin’s knee on his neck or neck area for what prosecutors say was 9 1/2 minutes.

Brodd likened it to a situation in which officers used a Taser on someone fighting with officers, and the suspect fell, hit his head and died: "That isn’t an incident of deadly force. That’s an incident of an accidental death."

But Brodd said: "I felt that Officer Chauvin’s interactions with Mr. Floyd were following his training, following current practices in policing and were objectively reasonable."

Under cross-examination by prosecutor Steve Schleicher, Brodd agreed that the use of force must always be reasonable and that officers must stop or lessen that force until it becomes reasonable.

The witness said it appeared to him that Floyd was still struggling while he was on the ground.

Under questioning by Nelson, Brodd also testified that the bystanders yelling at the officers to get off Floyd complicated the situation for Chauvin and the others.

"The crowds started to grow in size, start to become more vocal. So now officers are always trained to deal with, right, so what threat is the biggest threat?" he said.

"Is it the suspect on the ground in front of me in handcuffs that we have relatively controlled? Or is it the unknown threat posed by the crowd that could go from verbal to trying to interfere with my arrest process in a matter of seconds?"

Brodd appeared to endorse what prosecution witnesses have said is a common misconception: that if someone can talk, he or she can breathe.

"I certainly don’t have medical degrees, but I was always trained and feel it’s a reasonable assumption that if somebody’s, ‘I’m choking, I’m choking,’ well, you’re not choking because you can breathe," he said.

Nelson: And at the beginning of the prone position of Mr. Floyd, did you observe, Mr. Floyd continued, at least initially actively resist…
Brodd: Actively, and with the kick motion, active aggression. #DerekChauvinTrial

The court has reconvened after a lunch break. The defense calls use-of-force expert Barry Brodd to the witness stand.

Brodd testifies to teaching the use of force among other topics to the law enforcement officer. He says he taught "verbal judo" which was developed after the Rodney King incident to help officers learn better communication tools. Brodd tells the court he has reviewed use of force in more than 140 cases. He adds he has testified in civil/criminal cases and both state and federal cases 10 times since 2016.

He testified that Chauvin’s use of force was "justified" when used on Floyd.

"So as you’re reviewing an incident, such as this, you have to try to see it through the eyes of the officers on the scene," Brodd said.

Brodd: So it’s easier to sit and judge in an office on an officer’s conduct. It’s more of a challenge to again put yourself in officer shoes to try to make an evaluation, through what they’re feeling, what they’re sensing, the fear they have, and then make a determination.

Brodd says he did not consider this case to involve deadly force. He also claims that drugs played a big role in this case. He says officers should keep people who are under the influence handcuffed until they’re taken to a medical facility.

"I felt the level of resistance exhibited by Mr. Floyd justified the officers, and higher levels use of force that they chose not to select," Brodd testified.

He believes Floyd was still resisting while handcuffed on the ground.

BB: Officers are always trained to deal with…what threat is the biggest threat. Is it the suspect on the ground in front of me in handcuffs…or is it the unknown threat posed by the crowd… #DerekChauvinTrial

The defense finishes questioning. The state will now reexamine after a five-minute break.

State prosecutor Steve Schleicher takes over. After going back and forth about whether Brodd considers Chauvin’s knee on Floyd’s neck a use-of-force incident, Brodd said "it could be."

S: You indicated that one of the things that you look at is the severity of the crime…& something that would you agree, the label of the crime, whether it’s a misdemeanor…or a felony isn’t as important as the underlying conduct involved in the crime.
B: I agree. #chauvintrial

He agreed with the state prosecutor that risk and threat are two different things.

SS: Do you agree with the proposition that in law enforcement, once somebody is in your custody, they’re in your care.
BB: I agree.
SS: And in fact that’s MPD policy and training in, your custody in your care. Correct?
BB: Yes. #DerekChauvinTrial

Schleicher again asking about position of Chauvin’s knee. "His left knee is on Mr. Floyd’s neck…?"

Brodd, "In this picture, yes."

The state is continuing questioning but Cahill called a break at 3 p.m.

The Derek Chauvin murder trial continued on Tuesday, with the morning session seeing the state prosecution team resting their case and the defense calling five people to the witness stand.

Hennepin County Judge Peter Cahill said Monday that closing arguments would begin next Monday, with the defense’s testimonies to wrap up by the end of the week.