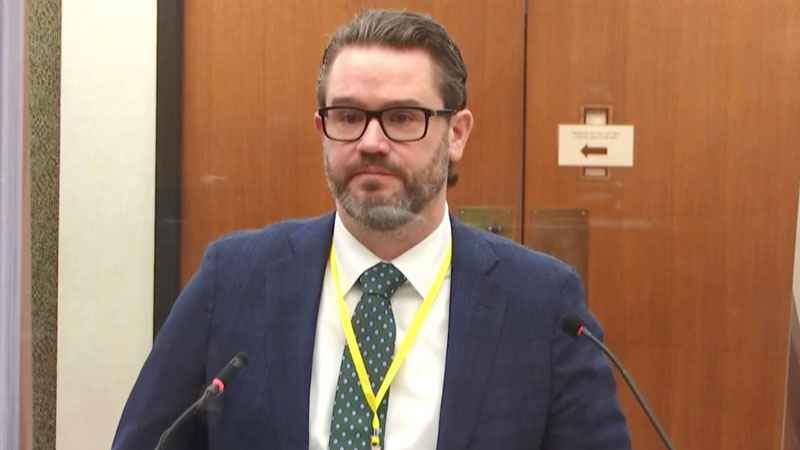 The witness has been dismissed and the court has adjourned for the day. The jury will return Friday at 9:15 a.m.

Pleoger said he was a sergeant on May 25, 2020. He stated he was the person called by the 911 dispatcher, who voiced her concerns about what she saw on the video monitor at 38th Street and Chicago Avenue. He was the 3rd Precinct supervisor that was on duty at the time of Floyd’s death.

The retired sergeant was the first supervisor to arrive at the scene that day. He arrived at 8:45 p.m., about 37 minutes after officers first encountered Floyd and 14 minutes after the call with the dispatcher ended.

The police department is required to contact a supervisor if some kinds of use of force are used, according to Pleoger.

Judge Cahill explains that the state is introducing Minneapolis Police Dept. policies without having to call in witnesses to provide a foundation.

The court is looking at documents that state MPD policies. Pleoger is asked to explain the purpose of a hobble or maximal restraint technique is. That restraint was not used in Floyd’s arrest.

Pleoger said he has known Chauvin since 2008, noting they worked on the same shift together. He also confirmed he knows Tou Thao, J Alexander Kueng and Thomas Lane. He stated that Kueng and Lane were "new officers."

The court played audio of the 911 dispatch call to Pleoger on May 25, 2020. After the call was made, he called Chauvin on his cellphone. They then played body camera footage of Chauvin on that call. He asked if Chauvin’s camera was on or off, due to department policy, during the call. Chauvin shut his camera off at a certain point.

He told the then-sergeant, "We just had to hold a guy down; he was just going crazy." He did not mention anything about having his knee on Floyd, according to Pleoger.

Pleoger says once someone is handcuffed and is not resisting, the restraint can stop. The officers did not let up the restraint on Floyd once he was motionless. The retired officer stated that a restraint such as that should only be administered for "a reasonable time."

Chauvin was also not clear with Pleoger on how long he held Floyd in that restraint.

After talking with Lane and Kueng at the scene, they advised him that Floyd was handcuffed. They didn’t mention any other restraint.

Pleoger says he talked to Lane and Kueng on scene.

Schleicher, "Based on that conversation, were you told there had been a restraint of an individual?"

Pleoger,"Yes, I believe they said they handcuffed him".

Chauvin was directed to talk with witnesses in body camera footage, but Chauvin told Pleoger "I can try but they are pretty hostile." The retired sergeant told him to do it anyways.

The court showed Chauvin and Thao inside the hospital where Floyd was taken. Pleoger was also present at Hennepin County Medical Center with them. Hospital staff later told the officers that Floyd had passed away. Thao and Chavin made Pleoger aware at that point that Floyd’s neck was knelt on.

After learning of Floyd’s death, Pleoger stated the situation would be treated as a "critical incident." He set up rides for officers down to City Hall and asked for the scene to be secured.

Pleoger was asked if he believes the restraint used on Floyd should have ended at some point, and the judge would not let him answer.

Back on audio. We don’t get an answer to that question.

Nelson is now questioning Pleoger without jury in the room, walking through the process for use of force review with Pleoger.

Nelson moves to disregard Pleoger’s opinion on whether or not the use of force should have stopped at some point. Schleicher provides more background information on the witness, stating he is allowed to give a partial opinion on it. Judge Cahill agrees. The jury comes back into the courtroom.

In response to the original questions, Pleoger stated when Floyd was no longer resisting, officers should have stopped using the restraint.

Nelson, "when a police officer is engaged in a situation, would you agree an officer is constantly taking in new information ..and making decisions based on information as it comes in"

Pleoger also confirms he has had bystanders film him before while he was on duty.

Nelson continues a barrage of questions of certain situations where police may be under duress. He clarified again to the court that he wasn’t aware it was a critical situation until he was notified at the hospital.

Capt. Norton has been excused from the witness stand. The court is in recess until 3:10 p.m.

Another witness, Capt. Jeremy Norton of the Minneapolis Fire Department, takes the stand.

Smith has been excused, a new witness sworn in.

Jeremy Norton is a captain with Minneapolis Fire Dept. pic.twitter.com/n3XZvcFHw1

Norton said about "80%" of a firefighter’s work is "medical in nature."

He stated he is in charge of the safety, well-being, and training of his crew. He adds he responds to calls with his crew as well. He explained that the fire department provides support for paramedics in situations where the individual is in critical condition.

On May 25, 2020, Norton said they were given a "Code 2" notice, but was provided "very little information." He said it was later upgraded to a Code 3.

"I believe the only information we had on our screen initially was Code 2 for one with mouth injury and then it was updated," he said, adding there wasn’t much more information provided.

He also said they went into Cup Foods when they arrived on scene, looking for the injured person. They were not provided a patient description. Norton said he was alerted by the off-duty firefighter at the scene, Genevieve Hansen, on what happened at the scene. He described her to be "agitated and distraught" when he spoke to her.

One police officer inside Cup Foods told Norton that "medics left" and they needed Norton.

Eldridge presented evidence in court, a photo of the fire department arriving on scene. He later was directed to meet the medics, who were on the corner of 36th Street and Park Avenue South.

Norton said he saw Floyd as "unresponsive," in the ambulance with a breathing tube in and a CPR device ongoing.

Norton says this is a photo of the front seat of the firetruck facing the ambulance.

Norton describes "We went into the ambulance" says he observed two paramedics, one police officer and a patient on the stretcher. At this point, Floyd had a breathing tube in & CPR device going pic.twitter.com/z3WSwVbnwN

Norton says without breathing and CPR devices, "In the absence of those actions, the patient would have been pulseless and unresponsive – not breathing, and for all intents and purposes, dead."

After Norton saw Floyd’s condition once he arrived at the hospital, he said he realized what Hansen was talking about at the original scene. He sent a crew back to the scene to check on that off-duty firefighter.

"Once we got into the ambulance and I saw the severity of Mr. Floyd’s condition and the gravity … I understood the justification for duress and so I set my crew back to check on her to make sure she was OK," he said.

He stated in the report that "a man was killed in police custody." He also informed his deputy that an off-duty firefighter was a witness at the scene.

Nelson followed up with questions about the timing of the call. The state then took over questioning again.

Derek Smith, a paramedic for Hennepin County EMS, takes the witness stand to lead things off for the afternoon session.

Derek Smith is now on the witness stand. He’s a paramedic with Hennepin Co. EMS. #DerekChauvinTrial

Smith was on duty May 25, 2020. He was in the same ambulance as the other paramedic questioned earlier Thursday.

He defined cardiac arrest as "an individual that is, in layman’s terms, death, not producing the pulse, not breathing." Smith added he did not see Floyd’s chest "rising or falling" when he arrived on scene. He told his partner that he believed he was dead.

Smith describes telling his partner he thought Floyd was deceased and wanted to get him away from the scene.

He said he needed one of the officers to come with to help with chest compressions. Body camera footage confirmed that officer was Thomas Lane. Smith added that when he and his partner arrived on scene, no medical services were being provided to Floyd.

Smith also said he took off the handcuffs that police put on Floyd. The video shows Lane starting to give chest compressions on Floyd.

The paramedic pointed out some "superficial" injuries on Floyd’s neck and nose. He was more concerned about the cardiac arrest. When asked why the Minneapolis Fire Department was needed, he stated that cardiac arrest treatment requires more hands. They met with the firefighters at a specific location, and Lane left after that.

"A lot to be done and a little bit of time," Smith said in court.

He confirmed that Floyd "flatlined" or "was dead" in the ambulance. A shock was administered at some point to attempt to revive Floyd, but Smith noted nothing changed.

Eldridge: And while you were traveling on route to the hospital, did you at some point deliver a shock or administer a shock?

Smith had noticed a shockable rhythm while en route to the hospital.

The defense follows up with cross-examination of the witness. After a few follow-up questions, the witness is excused.

After George Floyd’s girlfriend and a Hennepin County paramedic took the witness stand during the trial of Derek Chauvin on Thursday, the court has resumed for the afternoon.

Hennepin County Judge Peter Cahill said that Friday’s session would conclude at noon, noting that the trial has gone quicker than anticipated.

Click here to catch up on what happened Thursday morning