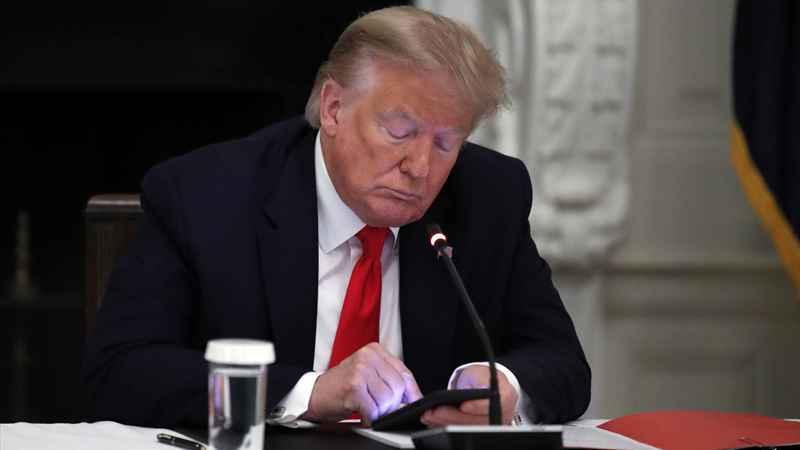 In this Thursday, June 18, 2020 file photo, President Donald Trump looks at his phone during a roundtable with governors on the reopening of America's small businesses, in the State Dining Room of the White House in Washington.[Alex Brandon/Associated Press]

Former President Donald Trump insists he’s enjoying his life off Twitter. The press releases his aides fire off on an increasingly frequent basis are more “elegant,” he says. Plus there’s no risk of backlash for retweeting unsavory accounts.

But since Trump was barred from major social media channels after helping incite the deadly Jan. 6 insurrection at the U.S. Capitol, his power to shape the national conversation is being tested.

Trump transformed from a reality television star to a politician and president by bending the tools of communication and the media to his will. He still connects with his supporters through his releases and appearances on Fox News and other conservative outlets, where he repeats misinformation about the 2020 election. And he remains a powerful force in the Republican Party, with a starring role Saturday at a Republican National Committee event at his Mar-a-Lago club in Florida.

Still, the sway over American life he once enjoyed appears to be eroding — at least for now.

“It’ll never be the same for Trump unless he’s a candidate again," said Harold Holzer, an historian who is director of Hunter College’s Roosevelt House Public Policy Institute and wrote a book about presidents and the press. “I don’t think it’s unnatural for coverage to diminish. I’m sure it’s tough on his ego, given how much oxygen he sucks up and how much ink he generates, but it’s not unnatural for an ex-president to get less attention.”

It’s been a dramatic adjustment nonetheless. Trump’s tweets used to drive the news cycle, with CNN, MSNBC and Fox News often spending dozens of hours a week combined displaying his missives, according to a GDELT analysis of television news archives. Since he was barred from Twitter and other platforms, Trump can no longer speak directly to large swaths of his audience and must now rely on his supporters and conservative and mainstream media to amplify his messages.

To compensate for the ongoing blackout, Trump aides have been pumping out statements and endorsements that often sound just like the tweets he used to dictate. “Happy Easter to ALL, including the Radical Left CRAZIES who rigged our Presidential Election, and want to destroy our Country!” read one sent from his political action committee. (“Happy Easter!” was the more subdued version offered by his official government office.)

At the same time, Trump has been ramping up his appearances on conservative media — even sitting down with his daughter-in-law for her online program. But few of those comments have reverberated as mainstream outlets, long criticized for allowing Trump to dictate coverage, have become increasingly wary of repeating his falsehoods, especially pertaining to the 2020 election.

While Trump still garners coverage, Google search results for his name are at their lowest point since 2015, as noted this week by The Washington Post. And on late night TV, some have tried to scrub him out entirely, with “Late Show” host Stephen Colbert refusing to say his name.

After five years of wall-to-wall Trump, the contrast is jarring.

"He was unlike any prior president in the amount of oxygen he sucked up. But he increasingly resembles many former president in how little oxygen he now gets," said Ari Fleischer, who served as press secretary to George W. Bush. While that is the reality for any former president, Fleischer argued that Trump continues to “loom large” in the party and could return to the spotlight if he chooses to run again.

And though his dominance of cable news has dropped precipitously from its peak in fall 2016, when he was mentioned tens of thousands of times a month, per GDELT data, he remains a presence on cable news channels nonetheless.

While most of Trump’s statements garner relatively little coverage, some, like one that blasted Senate Minority Leader Mitch McConnell as “a dour, sullen, and unsmiling political hack,” dominated news coverage, with CNN, in particular, running with it for more than 44 minutes.

“President Trump is the greatest news generator in American history," Trump spokesman Jason Miller said, insisting, "There was never this type of media interest in the post-Presidential careers of Clinton, Bush or Obama.”

Others see it differently.

“I think he lost all momentum when he got pulled from the platforms. Politics is about momentum and he has none now,” said presidential historian Douglas Brinkley.

While Trump has tried to inject himself into news coverage, Brinkley said his comments are largely treated as add-ons to coverage focused on other matters. “Where it used to be he was shooting tweets like Zeus, they were like thunderbolts from up high, and now it’s little squeaks from the mouse of Mar-a-Lago,” he said.

Yet Trump remains a commanding figure for the Republican Party. His endorsement is highly coveted heading into the 2022 Republican primaries. And he continues to publicly flirt with running again for president in 2024.

And Holzer believes Trump could reemerge if he is allowed to rejoin Twitter or goes through with much-hyped plans to launch his own social media outlet, as aides have said he is still considering.

GOP strategist Alex Conant argued Trump’s power “is waning by the day" as other Republicans make plans to run in 2024, and said Trump could be taking a more strategic approach if he wants to remain part of the daily conversation.

"When you’re president of the United States, it’s very easy to insert yourself into every news cycle. But once you’ve left office, it has to be more strategic," Conant said, arguing Trump could have announced a book, sat for primetime interviews, or delivered a series of major speeches about the future of the party.

Fleischer, too, argued Trump could have greater influence by following in the footsteps of presidents Bush and Obama, whose statements garner attention because they are rare.

“The risk for a former president is you risk starting to be seen as former senators or former congressman or contributors who are on TV on a somewhat regular basis. A former president should be at an elevated posture," he said. "But Donald Trump has always done things differently with some success.”