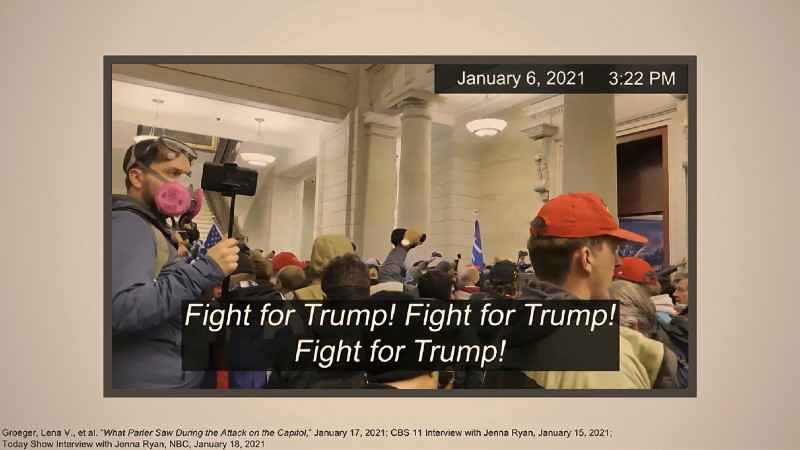 This image from video shows one of many slides presented by Democrats prosecuting the impeachment of former President Donald Trump in the Senate at the U.S. Capitol in Washington, Wednesday, Feb. 10, 2021. The video, which showed Trump's supporters chanting "Fight for Trump!" after they stormed into the U.S. Capitol on Jan. 6, was used by prosecutors as they sought to connect the mob with Trump and make the case that the president had incited them to insurrection. [Senate Television via AP]

House Democrats opened their first day of arguments in former President Donald Trump’s impeachment trial with searing footage of the U.S. Capitol riot as they painted Trump as an "inciter in chief" who systematically riled up his supporters and falsely convinced them the election had been stolen, culminating in the deadly attack.

"He assembled, inflamed and incited his followers to descend upon the Capitol," the lead impeachment manager, Rep. Jamie Raskin, D-Md., said Wednesday.

As she presented harrowing footage of the siege, Del. Stacey Plaskett, a Democrat representing the U.S. Virgin Islands and one of the prosecutors, said Trump had "put a target" on the backs of then-Vice President Mike Pence and House Speaker Nancy Pelosi, who were leading the certification of President Joe Biden’s election victory. "His mob broke into the Capitol to hunt them down," Plaskett said.

Highlights from the first full day of arguments:

TRUMP’S WORDS COME BACK TO HAUNT HIM

Trump’s voice rang out in the Senate Chamber as Democrats aired video from his rallies and other remarks to supporters. Interspersed throughout were slides of Trump’s tweets contesting the election and promoting the Jan. 6 rally in Washington, which he promised would be "wild."

The impeachment managers put Trump’s rhetoric on trial, from the months he spent laying the groundwork to contest the election results to the speech he delivered outside the White House egging his supporters to "fight" before they stormed the Capitol.

"He truly made his base believe that the only way he could lose was if the election were rigged," said Rep. Joaquin Castro, D-Texas, another one of the prosecutors.

Trump, the House impeachment managers argued, whipped his supporters into a frenzy with the "big lie" that their votes had been stolen, and urged them to fight.

"This attack never would have happened but for Donald Trump," said Rep. Madeleine Dean, D-Pa., choking back emotion. "And so they came, draped in Trump’s flag, and used our flag, the American flag, to batter and to bludgeon."

There was no widespread fraud in the election, as has been confirmed by election officials across the country and former Attorney General William Barr. Dozens of legal challenges to the election put forth by Trump and his allies were dismissed.

To reconstruct the siege for senators, Democrats aired never-before-seen security footage from inside the Capitol that showed the attack unfolding. Their presentation included chilling video of the rioters rampaging into the building and audio of distressed police officers who tried in vain to keep them out. "We have been flanked and we’ve lost the line," one frantic officer could be heard saying.

The presentation also showed the perilous moments when lawmakers and others, including Senate Majority Leader Chuck Schumer and Pence, were rushed to safety; body cam footage of an officer being beaten; the sounds of crunching, breaking glass; profane screams and violent threats; and cries as the rioters streamed into the building, some carrying riot shields and weapons.

"Where do they count the f—ing votes?" one member of the mob could be heard shouting. "You work for us," one yelled at officers. "Where’s that meeting at?"

Democrats warned that many of the scenes would be hard to watch, including the horrifying screams of an officer being crushed in a doorway and video of one of the rioters, Ashli E. Babbitt, being shot to death by U.S. Capitol Police.

Also never before seen: Footage of Capitol Police officer Eugene Goodman, who has already been hailed as a hero, warning Sen. Mitt Romney, R-Utah, that the mob was headed his way. Romney turned and dashed in the other direction.

"I did not know that was Officer Goodman," Romney told reporters after seeing it. "I look forward to thanking him when I next see him."

Goodman also directed the mob away from the Senate Chamber and toward other officers.

While the Democrats excoriated Trump, they lavished praise on an unlike figure: former Vice President Pence, outlining in exacting detail how his life had been put in physical danger and hailing him as a "patriot" for defying Trump’s pressure campaign to overturn the election results.

"Vice President Pence had the courage to stand against the president, tell the American public the truth and uphold our Constitution. That is patriotism," said Plaskett, whose presentation included previously unseen footage of Pence and his family being evacuated from the Senate chamber as rioters spread through the Capitol.

Other footage showed the rioters chanting "Hang Mike Pence!" as others searching for him. At one point, Plaskett said, the rioters were within 100 feet of where Pence was sheltering with his family.

"They were talking about assassinating the vice president of the United States," she said.

Many Republicans had been appalled by Trump’s treatment of his most loyal soldier during his final days in office. And the focus appeared to be a tacit acknowledgment of the Democrats’ intended audience as they try to convince Senate Republicans — many of whom are close with Pence — that Trump deserves to be punished for what happened.

"Mike Pence is not a traitor to this country. He’s a patriot," said Castro. "And he and his family, who was with him that day, didn’t deserve this, didn’t deserve a president unleashing a mob on them, especially because he was just doing his job."

They were merely observers as Democrats had the floor. But members of Trump’s legal team indicated they would stay the course despite a flood of criticism, both from Republican senators and the former president, about their performance during procedural arguments Tuesday.

"Not at all," said attorney Bruce Castor when asked by reporters whether there would be any changes to their strategy. "No, I don’t anticipate any," echoed David Schoen, another attorney.

Both Castor and Schoen said they had spoken to Trump on Tuesday, but Castor denied that the former president had expressed displeasure to him.

"Far from it," he said, even as Schoen allowed there was room for improvement after Republican senators panned their performance as disjointed and unhelpful.

"To the extent they were critical of anything that I did, I just want to try to do a better job then," he said.

"Bottom line is I think his team will do better, can do better," said Sen. Lindsey Graham, D-S.C., a close ally of the president, after the two had spoken. While he acknowledged there was "room for improvement," Graham said he’d tried to tell Trump that "the case is over. It’s just a matter of getting the final verdict now. " All but six Republican senators voted Tuesday against moving forward with the trial.

Dean described the House Chamber descending into chaos as she stood with colleagues in the gallery above the floor and made panicked calls to her husband and sons.

"Someone shouted up to us, ‘Duck!’ then ‘Lie down!’ then ‘Ready your gas masks!" she remembered. "Shortly after there was a terrifying banging on the chamber doors. I will never forget that sound."

Rep. Eric Swalwell, D-Calif., described the text he sent to his wife telling her to hug their young children.

"On Jan. 6," said Castro, "President Trump left everyone in this Capitol for dead."

Throughout the proceeding, the House managers served as personal witnesses of the horror and repeatedly invoked the word "us" as they appealed to fellow lawmakers targeted in the attack.

"He was coming for you, for Democratic and Republican senators. He was coming for all of us, just as the mob did at his direction," said Rep. Ted Lieu, D-Calif., after describing Trump’s rhetoric.

There appears little chance enough Republicans will break with Democrats to convict Trump at the end of the trial. And some of them appeared indifferent to the proceedings and unmoved by the evidence Wednesday.

Missouri Sen. Josh Hawley, who led the Senate challenge to the election along with Texas Sen. Ted Cruz, said the prosecutors’ case was "predictable" and included information that was already public.

The video evidence was "nothing new here, for me, at the end of the day," said Hawley, who maintains the trial is unconstitutional.

Wisconsin Sen. Ron Johnson, another close ally of Trump, predicted the remainder of the trial was "going to be pretty tedious" and said the two sides would be better served if they just made their cases "in a couple hours" and be "done with this."

And Kentucky Sen. Rand Paul, who sat with his back to the screen, writing notes on a pad, walked out in the middle of Plaskett’s description of the threats against Pence.

It was a notable contrast with Democrats like Maryland Sen. Ben Cardin, who described the prosecutors’ presentation of evidence as "painful" to watch.

While it forced them to relive a traumatic moment, "it also helps to bring closure, so I think it’s something that we have to go through," said Cardin, who described Jan. 6 as "one of the roughest days of our life."