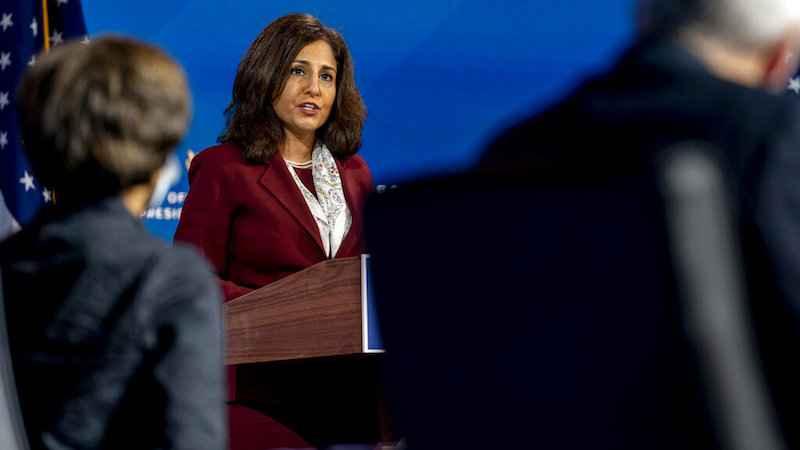 The Senate Homeland Security and Governmental Affairs Committee postponed a business meeting scheduled for Wednesday. Tanden’s nomination was on the agenda for the panel, one of two that will vote on Tanden’s bid to lead the White House Office of Management and Budget. The committee did not give a reason for the postponement or announce a new meeting date.

The Senate Budget Committee, which also will vote on Tanden, also postponed its Wednesday meeting.

Tanden’s nomination ran into trouble soon after Biden announced it, and her confirmation was thrown into doubt over the last week as key moderate Republican senators said they would vote against her. That development came days after Democratic Sen. Joe Manchin of West Virginia said he could not support Tanden.

Biden can’t afford to lose the support of another Democrat in the 50-50 Senate as the White House continues to lobby for Republican support for Tanden.

White House press secretary Jen Psaki tweeted Wednesday that Tanden "is a leading policy expert who brings critical qualifications to the table during this time of unprecedented crisis."

One unknown is Sen. Kyrsten Sinema, D-Ariz., a member of the Senate Homeland Security and Governmental Affairs Committee who has yet to announce her position on Tanden.

Sen. Lisa Murkowski, a moderate Republican from Alaska who could provide the key GOP vote Tanden will need, also has not said which way she is leaning.

Lawmakers have based their objections to Tanden mostly on sharp tweets she sent in the past that caustically criticized both Republican and Democratic lawmakers.

Tanden worked for Hillary Clinton and leads the Center for American Progress, a liberal think tank. She is the daughter of immigrants from India and would be the first woman of color to lead the White House budget office.

She has apologized and deleted many of the tweets.