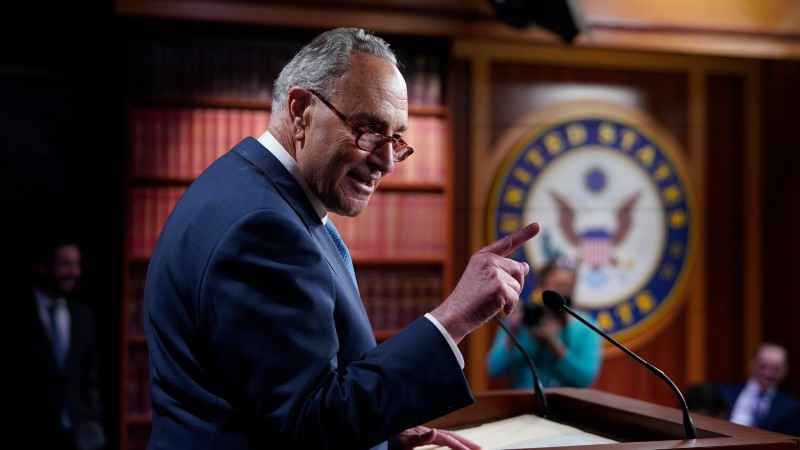 Senate Majority Leader Chuck Schumer, D-N.Y., speaks to reporters after final votes going into the Memorial Day recess, at the Capitol in Washington, Friday, May 28, 2021. Senate Republicans successfully blocked the creation of a bipartisan commission to study the Jan. 6 attack on the Capitol by rioters loyal to former President Donald Trump.[J. Scott Applewhite/Associated Press]

Pressure is mounting on Democrats to end the practice of requiring 60 votes to move legislation through the Senate if they hope to advance President Joe Biden’s agenda.

Earlier Friday, Republicans blocked a bill that would have established a commission to investigate the deadly Jan. 6 Capitol insurrection.

Fresh off the defeat, Senate Majority Leader Chuck Schumer set up a June vote on another crucial priority — an elections overhaul bill that confronts restrictive new voting laws emerging in several key states after Donald Trump’s loss in the 2020 presidential election to Biden.

The ambitious elections bill has been seen as a defining test case for changing the Senate filibuster rules that require the 60-vote hurdle in the evenly split chamber. Democrats see the legislation as a vital step toward protecting voting systems, but Republicans are unlikely to give it much support.

The stunning GOP rebuke of the proposed bipartisan commission on the Capitol riot, on a 54-35 vote, accelerated the argument, showing Democrats — and perhaps the broader public — how intense partisan loyalties are likely to make it difficult for Biden’s party to strike bipartisan compromises on elections reforms, infrastructure or other parts of his agenda.

“We have seen the limits of bipartisanship,” Schumer told reporters at a news conference after the vote. “Everything’s on the table.”

The filibuster is a Senate procedural rule that requires a vote by 60 of the 100 senators to cut off debate and advance a bill. With the Senate divided 50-50, Democrats would need the support of 10 Republicans to move most bills. The vote on advancing legislation to create a commission to investigate the insurrection highlighted how reluctant the GOP will be to cooperate.

While some senators prefer to stick to the long-standing rules, despite the often cumbersome process, others say the time has come to lower the threshold to 51 votes. The vice president of the party in the White House — currently Kamala Harris — is able to break a tie.

“I will tell you that when it comes to voting rights and democracy, we have to defend the democracy, not the Senate,” Sen. Raphael Warnock, D-Ga., a leading proponent of the elections and voting rights bill, said ahead of Friday’s vote.

Overhauling the filibuster would require the support of a majority of senators, but not all Democrats are ready to do so. Two centrists, Sen. Joe Manchin of West Virginia and Kyrsten Sinema of Arizona, are holdouts against any efforts to alter the filibuster, preferring to stick with the current practice, which typically requires bipartisan compromise.

But in a rare joint statement as tensions rose ahead of Friday’s vote, Manchin and Sinema expressed exasperation with Republicans, imploring their colleagues not to stand in the way of a bipartisan commission to investigate the assault by a mob loyal to Trump seeking to overturn Biden’s election.

Manchin told reporters at the Capitol that the opposition to the Jan. 6 commission was “disheartening.” Sinema did not vote.

As the Senate was considering the commission, Trump continued to push his false assertions about the 2020 election and its aftermath, which have collectively been dubbed the “big lie.” His persistent attacks on the integrity of the 2020 vote are sounding alarms among Democrats — and some Republicans — that more must be done to shore up Americans’ faith in the civic process.

Despite Trump’s repeated accusations of voter fraud, dozens of judges and elections officials across the nation, along with his own attorney general, have found no evidence of a rigged election.

The bill headed for a vote, the For the People Act, is vast, tackling a range of interrelated issues that Democrats say will protect the vote and curb special interests. Republicans say it is too broad of a federal reach into state and local election systems.

It would mandate early voting, same-day registration and other long-sought changes that Republicans reject. The measure would also require dark money political groups to disclose anonymous donors. A version has already been approved in the House.

The Democrats see the sweeping elections overhaul, which would establish numerous federal standards for elections, as the only path to push back against a raft of legislation advanced by Republican state lawmakers in statehouses across the country.

As of mid-May, 14 states have enacted 22 new laws with provisions that make it harder for Americans to vote, according to research by the Brennan Center for Justice, which supports the Democratic proposal.

Senate Republican leader Mitch McConnell has warned Democrats off any changes to the filibuster, though leaders of both parties have changed the rules over the years to lower the votes required on the confirmation of judicial and executive branch nominees.

Congress is now out for a weeklong Memorial Day recess. In the letter to colleagues, Schumer said the elections bill would come to a vote the week of June 21.