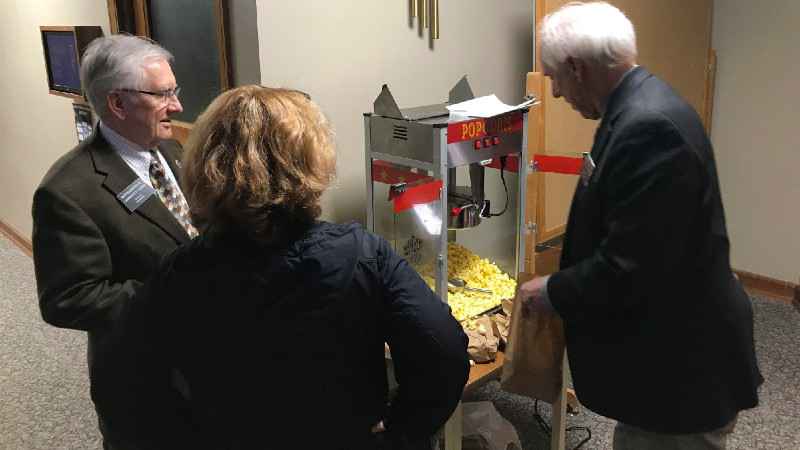 From left, North Dakota Reps. Lawrence Klemin, R-Bismarck; Mary Johnson, R-Fargo; and Dennis Johnson, R-Devils Lake; help themselves to popcorn from a machine that triggered two fire alarm evacuations of the state Capitol's legislative wing on Monday, March 22, 2021 in Bismarck, N.D. . The machine has since been removed from the premises.[Jack Dura/The Bismarck Tribune via AP]

A popcorn machine has been removed from the North Dakota Capitol after it twice triggered fire alarms that brought firefighters to the building this week and caused legislators to evacuate.

Rep. Mary Johnson was on her third batch of popcorn Monday afternoon when the machine triggered the alarms for the second time that day. Johnson said she wasn’t aware of a policy that bans popcorn poppers, toasters and other food appliances from the building, with the exception of the Capitol Cafe.

House Majority Leader Chet Pollert said the popcorn helped bring together House Republicans, whose caucus has been “a little strained” due to the coronavirus pandemic and the House expulsion of former Rep. Luke Simons, the Bismarck Tribune reported.

“Popcorn cheers people up for a reason,” Pollert said. “And now it’s gone, and that’s the way it goes.”