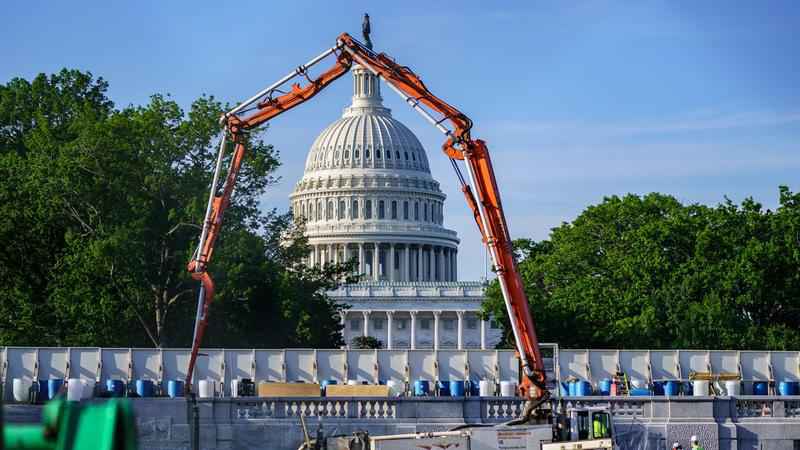 A concrete pump frames the Capitol Dome during renovations and repairs to Lower Senate Park on Capitol Hill in Washington, Tuesday, May 18, 2021. President Joe Biden hopes to pass a massive national infrastructure plan by this summer but Democrats and Republicans in Congress appear divided over his proposal for $2.3 trillion in spending to upgrade the nation's crumbling infrastructure.[AP Photo/J. Scott Applewhite]

While talks have not collapsed, the downbeat assessment is certain to mean new worries from Democrats that time is slipping to strike a deal. The president’s team is holding to a soft Memorial Day deadline to determine whether a compromise is within reach. Skepticism had been rising on all sides over the lack of significant movement off Biden’s $2.3 trillion plan or the GOP’s proposed $568 billion alternative.

“This proposal exhibits a willingness to come down in size,” said White House press secretary Jen Psaki, disclosing the new offer as talks were underway between key Cabinet secretaries and GOP senators at a crucial stage toward a deal.

But after the hourlong meeting, the Republicans quickly rejected the new approach as "well above the range” of a proposal that could win bipartisan support.

The two sides “seem further apart” than when negotiations began, according to a statement from an aide to Sen. Shelley Moore Capito, R-W.Va., the lead negotiator for the group of six GOP senators.

The White House and the Republican senators have been in talks ever since Biden met with a core group of Republican negotiators over the possibility of working together on an infrastructure plan. The White House dispatched the transportation and commerce secretaries and top aides to Capitol Hill to meet with the Republicans earlier this week, and they had a follow-up video call Friday.

According to a memo obtained by The Associated Press, the administration’s new approach is cutting more than $550 billion from the president’s initial offer.

“Our approach should ensure that corporations are paying their fair share,” said the memo from the administration’s negotiators to the GOP senators.

But Republicans dismissed the new White House offer as “very marginal movement” on the topline without much difference in policy, according to a Republican aide familiar with the negotiations and granted anonymity to discuss them.

The new offer was “disappointing,” the aide said.

Securing a vast infrastructure plan is Biden’s top priority as he seeks to make good on his campaign pledge to “build back better” in the aftermath of the coronavirus crisis and the economic churn from a shifting economy. With narrow Democratic majorities in the House and Senate, the president is reaching out to Republicans for support on a potentially bipartisan approach rather than relying simply on his own party to muscle the proposal to passage.

But Republicans are adamantly opposed to Biden’s proposed corporate tax increase to pay for the package, refusing to undo the 2017 tax cuts, the party’s signature domestic accomplishment under President Donald Trump. They reduced the corporate rate from 35% to 21%. Biden proposes lifting the corporate tax to 28%.

“If they’re willing to settle on target a infrastructure bill without revisiting the 2017 tax bill we’ll work with them,” McConnell told Fox’s Larry Kudlow, a former Trump adviser.

Psaki said the new proposal drops the president’s proposed expenditures on broadband as well as roads, bridges and other major investments to meet the Republicans’ lower level. She said the administration’s proposal also involved “shifting investments in research and development, supply chains, manufacturing and small business" out of the infrastructure talks, since they could be considered elsewhere, noting in Endless Frontiers Act, which is a separate bipartisan bill pending in the Senate.

But Psaki said the president’s team is still pushing for investments in new veterans hospitals, rail projects and green energy investments to fight climate change that Republicans have excluded from their offers.

In all, the White House cut broadband from $100 billion to $65 billion, as Republicans proposed. It also reduced road and bridges spending by $39 billion, from $159 billion to $120 billion, to move closer to the GOP’s proposal of $48 billion in new funds.

Removing the research and development funds would cut a whopping $480 billion, the aides said.

The White House characterized the GOP’s initial $568 billion “Roadmap” proposal as amounting to an estimated $175 billion to $225 billion in “new investment, above current levels Congress has traditionally funded,” according to the memo.

The GOP senators have not publicly disclosed their latest offer.

The statement from Capito’s office said there continue to be vast differences between the White House and Senate Republicans on "the definition of infrastructure, the magnitude of proposed spending, and how to pay for it.”

The new offer from the White House was intended to make a good faith effort at compromise, and to prod Republicans to put a more substantive counteroffer on the table, the officials said.

In earlier talks, latest offer from GOP lawmakers left some dismay in the administration that there wasn’t more movement from their initial $568 billion proposal.

The White House’s hopes for a bipartisan deal on infrastructure have cooled but they have not abandoned the effort, one of the officials said.

Biden has reveled in the face-to-face negotiations, aides said, and has expressed hope to bring Republicans along.

But the outward talks of progress have not translated into the two sides getting much closer to a deal. Beyond the significant gap in the two sides’ visions for the size of the package, there has been little discussion of how to reach an agreement on how to pay for it.

One GOP senator in the talks suggested tapping unspent funds from the massive COVID-19 aid package to help pay for the infrastructure investment. Other funds could be tapped from uncollected tax revenues or public-private partnerships.

One strategy that had gained momentum would be for Biden to negotiate a more limited, traditional infrastructure bill of roads, highways, bridges and broadband as a bipartisan effort. Then, Democrats could try to muscle through the remainder of Biden’s priorities on climate investments and the so-called human infrastructure of child care, education and hospitals on their own.

But, administration aides believe, if such an "infrastructure only” bipartisan deal is far smaller than Biden’s original proposal, the White House risks a rebellion from Democrats who could claim that the president made a bad deal and missed the moment to pass a sweeping, transformational package.