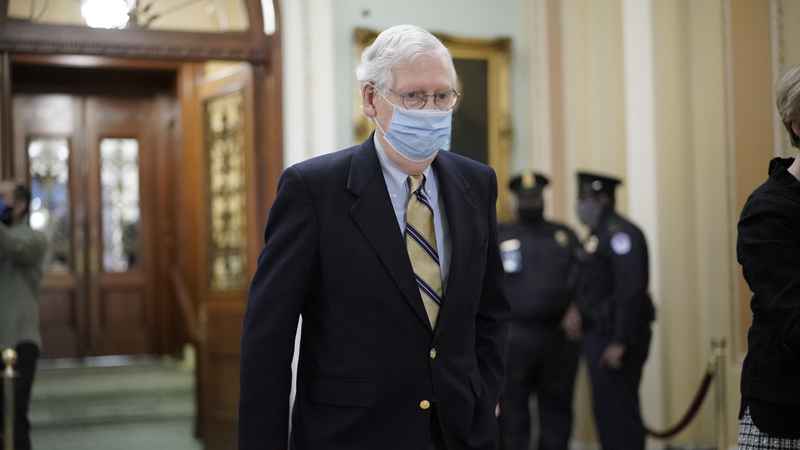 Senate Minority Leader Mitch McConnell of Kentucky, walks in the Capitol as the Senate convenes in a rare weekend session for final arguments in the second impeachment trial of former President Donald Trump, at the Capitol in Washington, Saturday, Feb. 13, 2021.[J. Scott Applewhite/Associated Press]

Senate Minority Leader Mitch McConnell excoriated Donald Trump on Saturday for being “morally responsible” for the Jan. 6 attack on the Capitol and suggested he could face future criminal liability, but said he voted to acquit him at the impeachment trial because lawmakers had no jurisdiction over a former president.

Washington’s most powerful Republican used his strongest language to date to denounce Trump minutes after the Senate acquitted the former president, voting 57-43 to convict him but falling short of the two-thirds majority needed to find him guilty. Seven Republicans voted to convict.

Clearly angry, the Senate’s longest-serving GOP leader said Trump’s actions surrounding the attack on Congress were “a disgraceful, disgraceful dereliction of duty.” He even noted that though Trump is now out of office, he remains subject to the country’s criminal and civil laws.

“He didn’t get away with anything yet,” said McConnell, who turns 79 next Saturday and has led the Senate GOP since 2007.

It was a stunningly bitter castigation of Trump by McConnell, who could have used much of the same speech had he instead decided to convict him. Had McConnell voted to find Trump guilty, he has enough respect among his colleagues that many more of them may well have done the same.

By voting for acquittal, McConnell and his fellow Republicans left the party locked in its struggle to define itself in the post-Trump presidency. Numerous, fiercely loyal pro-Trump Republicans and more traditional Republicans who believe the former president is damaging the party’s national appeal are struggling to decide its direction.

By 57-43 vote, Trump acquitted of incitement of insurrection in 2nd impeachment trial

A guilty vote by McConnell would have likely roiled GOP waters by signaling an attempt to yank the party away from Trump.

That could have prompted 2022 primary challenges against GOP incumbents, complicating Republican efforts to win the Senate majority by nominating far-right, less electable candidates. McConnell has spent years fending off such candidates after his party lost winnable Senate races in Delaware, Nevada and Missouri by nominating fringe contenders.

“Time is going to take care of that some way or another,” said Sen. Charles Grassley, R-Iowa, asked about the party’s course. “But remember, in order to be a leader you got to have followers. So we’re gonna find out.”

After Saturday’s vote, furious Democrats launched their own attacks against McConnell and the GOP. Speaking to reporters, House Speaker Nancy Pelosi, D-Calif., mocked the “cowardly group of Republicans” in the Senate she said were afraid to “respect the institution in which they served.”

She also said McConnell had created a self-fulfilling prophecy, forcing the Senate trial to begin after Trump left the White House by keeping the chamber out of session. Republicans say Pelosi could have triggered the proceedings earlier by delivering official impeachment documents sooner.

McConnell had signaled last month that he was open to finding Trump guilty, which in itself was an eye-opening signal of his alienation from the former president. He informed GOP senators how he would vote in a private email early Saturday, saying, “While a close call, I am persuaded that impeachments are a tool primarily of removal and we therefore lack jurisdiction.”

He expanded on his rationale on the Senate floor after Saturday’s roll call, making clear his enmity toward Trump’s actions.

“There is no question, none, that President Trump is practically and morally responsible for provoking the event of that day," he said.

Even before the November election, Trump repeatedly claimed that if he lost it would be due to fraud by Democrats, a false accusation that he trumpeted until leaving office.

He summoned supporters to Washington for Jan. 6, the day Congress formally certified his Electoral College loss to Joe Biden, then used a provocative speech near the White House to urge them to march on the Capitol as that count was underway. His backers fought past police and into the building, forcing lawmakers to flee, temporarily disrupting the vote count and producing five deaths.

McConnell called that assault a “foreseeable consequence” of Trump using the presidency, calling it “the largest megaphone on Planet Earth.” Rather than calling off the rioters, McConnell accused Trump of “praising the criminals” and seemed determined to overturn the election “or else torch our institutions on the way out.”

The 36-year Senate veteran maneuvered through Trump’s four years in office like a captain steering a ship through a rocky strait on stormy seas. Battered at times by vindictive presidential tweets, McConnell made a habit of saying nothing about many of Trump’s outrageous comments.

He ended up guiding the Senate to victories such as the 2017 tax cuts and the confirmations of three Supreme Court justices and more than 200 other federal judges.

Their relationship plummeted after Trump’s denial of his Nov. 3 defeat and relentless efforts to reverse the voters’ verdict with his baseless claims that Democrats fraudulently stole the election.

It withered completely last month, after Republicans lost Senate control with two Georgia runoff defeats they blamed on Trump, and the savage attack on the Capitol by Trump supporters. The day of the riot, McConnell railed against “thugs, mobs, or threats” and described the attack as “this failed insurrection.”