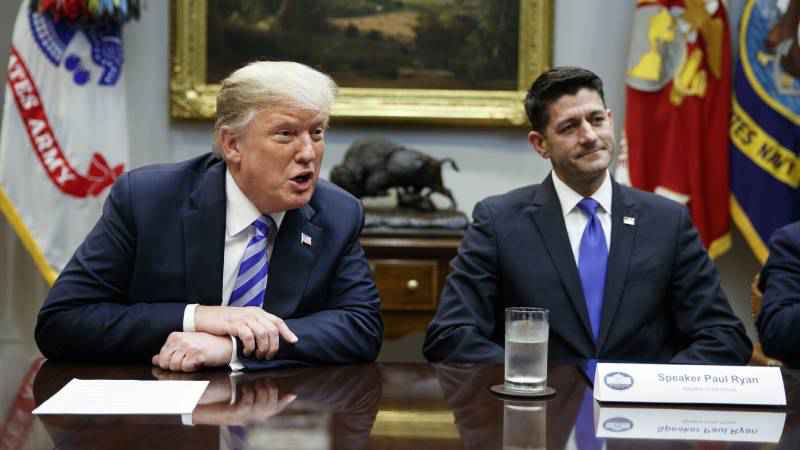 In this Sept. 5, 2018, file photo, then-Speaker of the House Paul Ryan, R-Wis., listens to President Donald Trump speak during a meeting with Republican lawmakers in the Roosevelt Room of the White House in Washington. Ryan is weighing in on the fight for the Republican Party’s future and he's urging conservatives to reject Donald Trump and “second-rate imitations.” Ryan is making the remarks in a speech May 27, 2021, at the Ronald Reagan Presidential Library in California. [AP/Evan Vucci, File]

Former House Speaker Paul Ryan, weighing in on the fight for the Republican Party’s future, is urging conservatives to reject Donald Trump and "second-rate imitations."

The comments, in a speech set for Thursday night at the Ronald Reagan Presidential Library in California, come as the vast majority of Republicans in Washington and beyond remain loyal to Trump even while the former president continues to make wildly false claims about his election loss last year.

Ryan, among the most respected Republicans in the nation’s capital before Trump’s rise, has been largely silent since he left Congress two years ago.

In his remarks, Ryan is not going after Trump by name, but the context is clear.

"We conservatives find ourselves at a crossroads," Ryan says in his prepared remarks, which The Associated Press obtained. "And here’s one reality we have to face: If the conservative cause depends on the populist appeal of one personality, or on second-rate imitations, then we’re not going anywhere."

The Wisconsin Republican was the opening speaker for the library’s "Time for Choosing" series, which will later feature 2024 Republican presidential prospects such as former Vice President Mike Pence, former U.N. Ambassador Nikki Haley and former Secretary of State Mike Pompeo.

Those close to Ryan, 51, do not expect him to run for public office again, but they suggest he remains concerned about the future of the party. He is on the boards of the library and Fox Corp., which owns Fox News.

In his speech, Ryan describes President Joe Biden’s agenda as "more leftist than any president in my lifetime" and he encouraged Republicans to rally around conservative principles.

Ryan also is taking aim at the GOP’s tendency to engage in culture wars. Some Republicans, for example, spent weeks praising Dr. Seuss after some of the popular children’s author’s books stopped being published because of racist images.

"We conservatives have to be careful not to get caught up in every little cultural battle," Ryan says in his prepared remarks. "Culture matters, yes, but our party must be defined by more than a tussle over the latest grievance or perceived slight. We must not let them take priority over solutions ¬– grounded in principle –- to improve people’s lives."