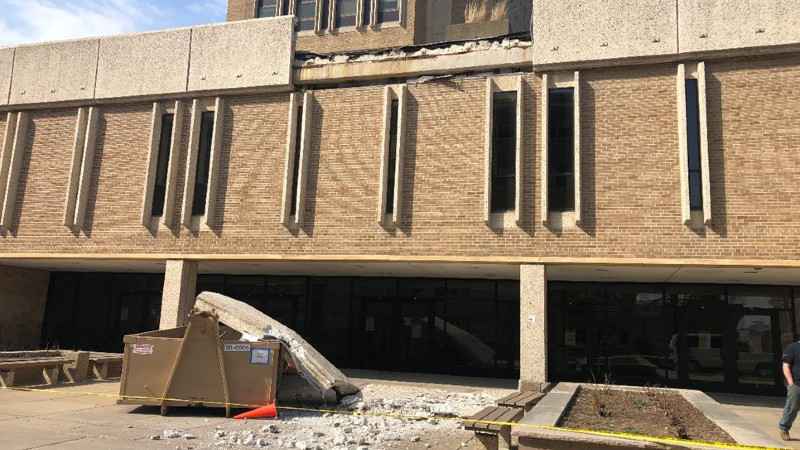 Gov. Tony Evers ordered workers Friday to remove all concrete slabs hanging over the entrances and exists of the University of Wisconsin System headquarters building after slab somehow broke off and crashed to the sidewalk outside the building’s main doors this weekend.

The pre-cast slab detached from Van Hise Hall’s facade on Sunday and plummeted three stories. Part of it landed on a dumpster; the rest shattered. Van Hise stands on the UW-Madison campus. It’s the second tallest building in Madison next to the state Capitol.

Evers issued an emergency order Friday directing workers to immediately remove similar slabs around the building’s entrances and exits. He said in the order that Graef Engineering Company investigated Sunday’s incident and found problems with the integrity and quality of the rest of the slabs. The company recommended removing the slabs on the third and fourth floors and installing railings in several areas, UW-Madison spokeswoman Meredith McGlone said in an email.

Evers said in the order that Van Hise sees heavy foot traffic daily and the slabs in their current condition pose an immediate threat to public safety. He approved spending $500,000 on repairs from the state building trust fund or any other funds available through the state Department of Administration or the Board of Regents.

Declaring an emergency order gives Evers the power to spend up to $500,000 on emergency repairs without approval from the state building commission.

McGlone said Van Hise will close at the end of business on Friday and remain empty until repairs are complete. In addition to serving as the system’s headquarters, the building also houses departments within UW-Madison’s College of Letters and Sciences. McGlone said no classes are being offered in the building this semester due to the COVID-19 pandemic and most employees have been working from home.

Evers’ capital budget included more than $1 billion for UW System renovations, but Republicans on the state building commission voted down every project in the spending plan last month. The Legislature’s GOP-controlled finance committee will craft its own plan as it revises the 2021-23 state budget.

System officials tweeted a photograph of the shattered slab on Sunday saying Van Hise has exterior features similar to other system buildings that are aging and in disrepair. They cited UW-Stevens Point’s Albertson Hall and UW-Green Bay’s Cofrin Library as examples.