“I just focus on my swimming, to get ready for my races, I just try to block out everything else,” Thomas said after the win.

Thomas previously swam on Penn’s men’s team due to the NCAA’s policy requiring trans female athletes to go through one year of hormone suppression therapy.

The win has stirred a debate in the sports and political world — including in Minnesota’s gubernatorial race — about transgender athletes in sports.

“When you have an x/y human swimming against x/x — I’m sorry it isn’t a fair contest — this is just ludicrous,” Dr. Scott Jensen, a Minnesota Republican candidate for governor, said in a video shared by his campaign. 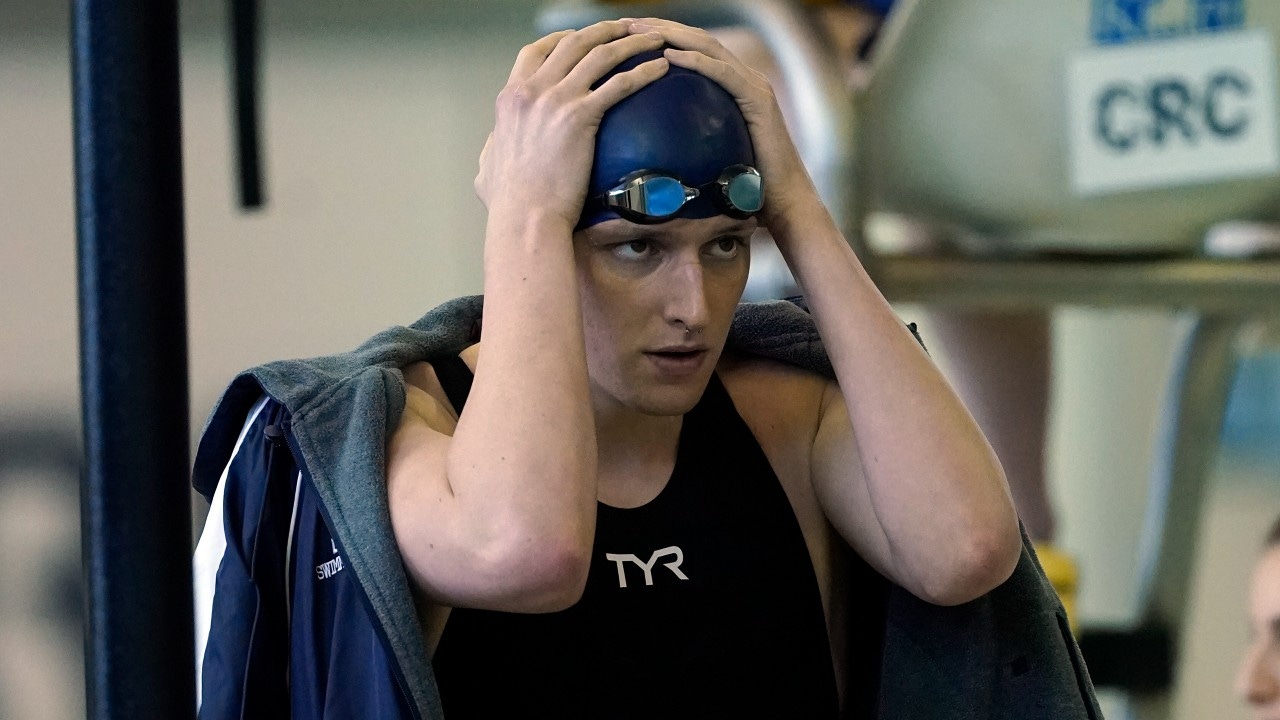 FILE - Pennsylvania's Lia Thomas waits for a preliminary heat in the Women's NCAA 500-yard freestyle swimming championship start, March 17, 2022, in at Georgia Tech in Atlanta. Florida Gov. Ron DeSantis is jumping into the conversation about the transgender swimmer who won a collegiate title by declaring the runner up as the real winner. DeSantis signed a proclamation declaring Florida-born Emma Weyant as the winner of the women’s 500-yard freestyle at the NCAA women’s tournament, rather than Lia Thomas. (AP Photo/John Bazemore, file)

Jensen posted that his administration “… will do everything in our power to make sure biological men cannot participate in female athletics. This does not mean we are not compassionate toward transgender individuals.”

The Minnesota State High School League passed a policy more than eight years ago that “allows participation for all students consistent with their gender identity or expression” to participate in athletics.

“I’m not concerned about making life more difficult for children who already have an incredibly high suicide rate — children and people who want to be who they are,” DFL Gov. Tim Walz said when asked about the topic during a news conference.

“This isn’t and shouldn’t be a partisan issue,” Minnesota Lt. Gov. Peggy Flanagan added. “We want to make sure Minnesota is the best place to raise a child. Anti-trans legislation is not the way to create that kind of state.”

Utah Gov. Spencer Cox vetoed a ban on transgender students playing girls’ sports on Tuesday, becoming the second Republican governor to reject such legislation this week. However, the Utah Legislature is poised to override the veto.

Utah’s governor said his move was aimed at protecting vulnerable kids during a wave of similar legislation passing in nearly a dozen states.

5 EYEWITNESS NEWS reached out to other candidates running for Minnesota governor and asked for their take on the issue of transgender athletes competing in sports. Below are the responses.

“This shouldn’t be controversial. Women’s sports are for women. For biological women. Less than a century ago women couldn’t even compete in many athletic opportunities. And now there’s a group of people who want to take it away. Let’s let women compete – fairly.”

“As a defender of the constitution and the first amendment, everyone has the right to their convictions and beliefs. All though I personally believe biological males should not be participating in women’s sports, it is not my intention as Governor to drive a wedge between Minnesotans when our state has many significant issues that need to be addressed. Law and order, school choice, parental rights, budget surplus, health mandates, secure elections, and Minnesota’s economy all take precedence over secondary issues that further divide us as a state. The legislature makes laws, not the Governor, and my intention is not to be a Governor that uses executive orders as a tool to circumvent the people’s voice.”

“Tim Walz and an increasingly radical left are abandoning girls and women with their war on fair and competitive women’s athletics. Women and men should compete based on their biological sex, which is fixed and immutable from conception.”