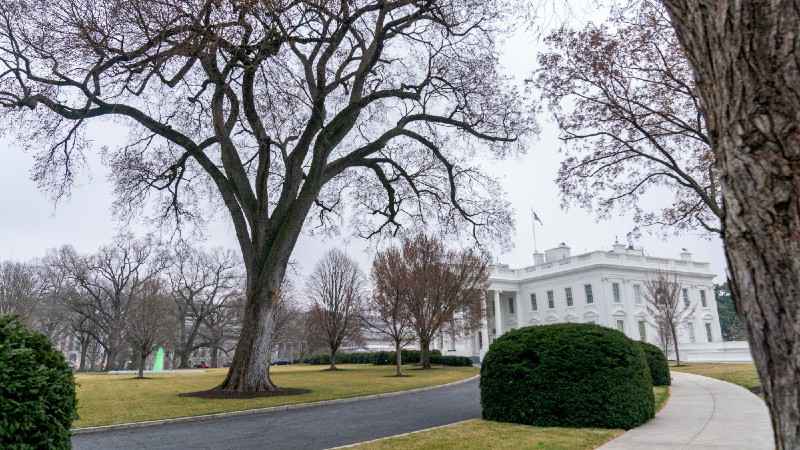 The fountain on the North Lawn of the White House is dyed green for St. Patrick's Day, Wednesday, March 17, 2021, in Washington.[AP Photo/Andrew Harnik]

President Joe Biden is marking St. Patrick’s Day as he recommits the U.S. to the Good Friday Agreement, which has come under increasing stress following the United Kingdom’s exit from the European Union.

The president attended a morning Mass at the aptly named St. Patrick’s Church near his family home in Wilmington, Delaware, before returning to the White House to partake in St. Patrick’s Day celebrations toned down due to the coronavirus pandemic.

Biden and Martin’s virtual bilateral meeting — Biden’s third with a foreign leader since he took office eight weeks ago — will be followed by the presentation of an engraved bowl of shamrock, which was sent ahead to Washington. It ensures that a tradition that began in 1952 will continue uninterrupted, if modified by COVID-19 concerns.

Signed in 1998, the Good Friday Agreement helped end sectarian violence that had raged for three decades over the issue of Northern Ireland unifying with Ireland or remaining part of the U.K.

The U.K.’s Jan. 1 exit from the EU has created new tensions over trade and travel at the Irish border. Just Monday, the EU said it was starting legal action against the U.K., arguing that the former member does not respect the conditions of the Brexit withdrawal agreement and is violating international law by unilaterally extending a special trade system at the land border that was set up as part of the Brexit divorce deal.

The White House stressed that the U.S. continues to support the Good Friday Agreement and its implementation. It called the agreement “the bedrock of peace, stability, and prosperity for all the people of Northern Ireland.”

Biden and Martin’s meeting also will emphasize their commitment to addressing global challenges and combating the coronavirus, among other issues, the White House said.

“Our two countries are committed to working together to safely restore global travel, work within multilateral fora to prevent and respond to future outbreaks, and ensure a sustainable global economic recovery,” the White House said in a statement.