Woodbury scores in the last minute to win thrilling game

The first half was dominated by defense. Woodbury had a great opening drive into the red zone. But, the Rebels stepped up and turned them over on downs.

Champlin Park had trouble sustaining a drive until their last drive of the first half. On the drive, the Rebels pounded the ball behind junior quarterback Sean Erickson and senior running back/defensive back Darius Givance. Erickson then hit junior wideout Emmit Tutt for a long reception. Following the big play, Givance finished the drive with a touchdown run to put the Rebels up 6-0 with under a minute remaining in the half.

Champlin Park’s first drive of the second half was methodical. They drove the length of the field, taking up 9:20 of the third quarter. But, Woodbury’s defense held them to a field goal, making it 9-0 Rebels. 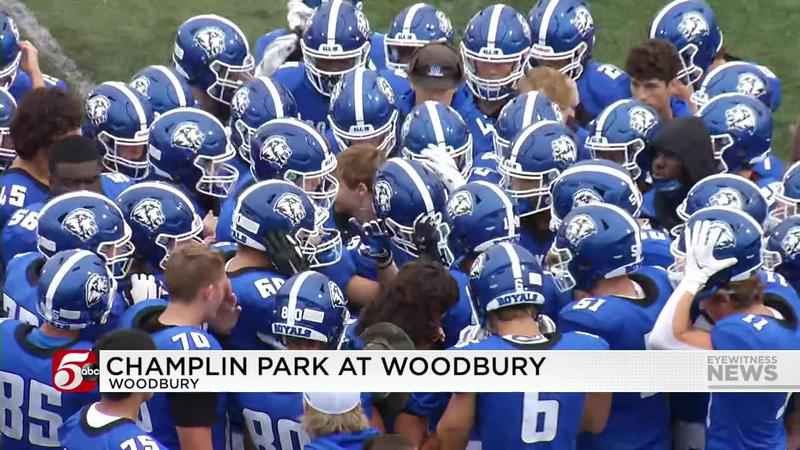 After the Royals turned the ball over on downs, the Rebels were putting together a drive that would effectively end the game but ended up fumbling and Woodbury recovered. On their ensuing possession, the Royals went three and out. But, on the punt, there was roughing the kicker against the Rebels, giving Woodbury another possession.

Woodbury sophomore quarterback George Bjellos hit senior wideout/defensive back Joey Gerlach for a huge gain that put the Royals in the red zone. Then, senior running back/defensive back RJ Altman would run it for the Royals, making it 9-7 Champlin Park with 7:19 left in the game.

Woodbury would get a defensive stop and get the ball back with 3:22 left in the game. Bjellos and Altman would bring the Royals down the field and put them on the 19-yard line with just 42 seconds remaining. Then, Bjellos hit senior wideout Joe Mahoney in the corner of the end zone for a beautiful catch to put Woodbury up 15-9, following a two-point conversion, with 37 seconds left in the game.

Gerlach would then intercept a Rebel Hail Mary to seal the victory for Woodbury.