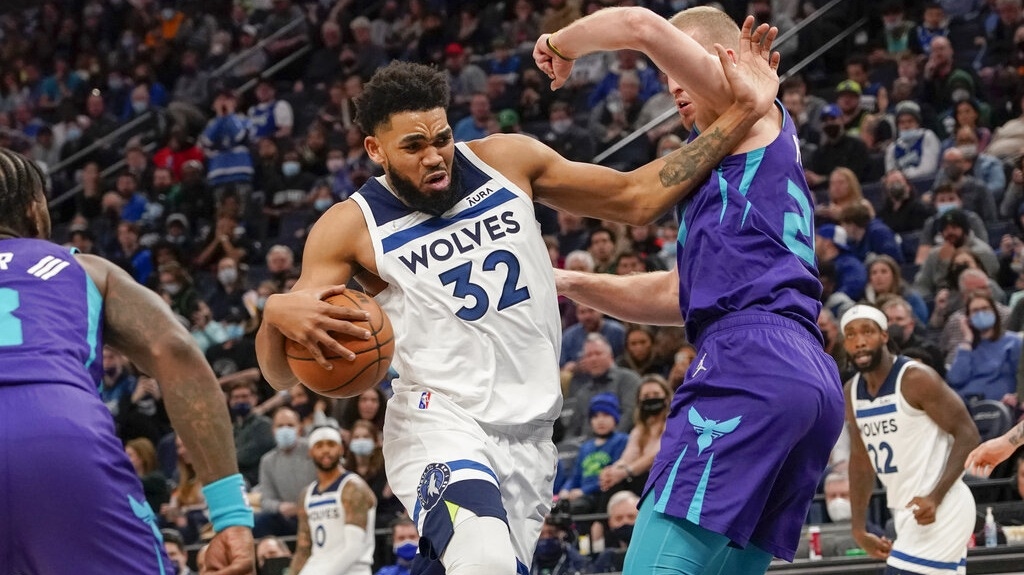 Karl-Anthony Towns had 39 points and 15 rebounds, D’Angelo Russell added 18 points and 11 assists, and the Minnesota Timberwolves came back to beat the Charlotte Hornets 126-120 in overtime on Tuesday night.

Minnesota came back from a 13-point deficit in the fourth, but Miles Bridges tied the game for Charlotte with a 3-pointer and free throw in the final minute. Russell’s last-second 3 was off the mark, forcing overtime. Towns scored seven points to lead the way in overtime.

Bridges had 28 points and 13 rebounds for the Hornets, who have lost eight of nine. LaMelo Ball scored 22 before fouling out in overtime, while Terry Rozier added 25 points and Mason Plumlee finished with 14 points and 17 rebounds.

Minnesota was without their energetic young swingman, Anthony Edwards, for the second half and overtime. He limped off the court with a right ankle sprain in the final seconds of first half.

Jarred Vanderbilt had 10 points and 14 rebounds for Minnesota, who used a 15-4 run in the final minutes to take the lead.

Russell had called out the Timberwolves’ fans for being quiet after the team beat Detroit just before a four-game trip. Russell took to Twitter to ask fans to stand up Tuesday until the Wolves scored. The fans followed through, standing until Russell hit a corner 3-pointer.

Charlotte had scored the first five points of the game, but Russell keyed a 19-2 run.

When the Wolves went to the bench, the Hornets took advantage. The momentum continued late in the half as Charlotte used a 23-8 run to take control at half.

Minnesota’s fans had no trouble staying engaged as the team made the comeback. The Timberwolves scored 30 points in the fourth, including 12 by Towns, and outrebounded the Hornets 19-8 in the quarter.

Hornets: Gordon Hayward missed his fourth straight game with a left ankle sprain. Cody Martin was out for the fifth straight game with left ankle/Achilles soreness. … Coach James Borrego made a switch to the starting lineup, giving PJ Washington the start and having Kelly Oubre Jr. come off the bench. … Plumlee just missed his third career triple-double with nine assists.

Hornets: Home against Miami on Thursday.

Timberwolves: Host Toronto on Wednesday for the second game of a back-to-back.