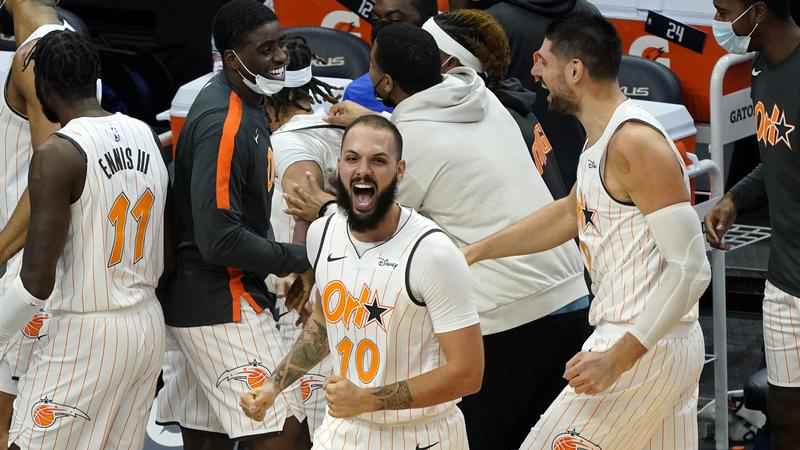 Orlando Magic's Evan Fournier (10) celebrates the game-winning basket by Cole Anthony at the end of an NBA basketball game against the Minnesota Timberwolves, Wednesday, Jan. 20, 2021, in Minneapolis. The Magic won 97-96.[(AP Photo/Jim Mone)]

Cole Anthony hit a hurried 3-pointer at the buzzer and the Orlando Magic stunned the Minnesota Timberwolves 97-96 on Wednesday night to stop a six-game losing streak.

Nikola Vucevic had 28 points and eight rebounds for Orlando. Evan Fournier added 24 points in his return to the lineup after missing nine games with lower back spasms.

Minnesota led by 20 before the Magic slowly chipped away in the second half. Jarred Vanderbilt missed a pair of free throws with a chance to ice the game for the Timberwolves. Anthony grabbed the rebound on the final miss, pushed the ball quickly up court and the rookie drained a contested 3 from the right wing to win the game.

D’Angelo Russell scored 19 points and Michael Beasley added 13 for the short-handed Timberwolves, who were without Karl-Anthony Towns, Ricky Rubio and Juancho Hernangomez as part of the NBA’s health and safety protocols.

Russell keyed a 24-1 run in the second quarter for Minnesota to take control before Orlando closed late.

Two of the league’s most inefficient offenses looked the part during a sluggish first quarter. Vucevic scored 12 points while Minnesota shot 35% and Orlando led 25-21.

Starting the day, the Timberwolves were 26th in the league in offensive rating and the Magic were 28th.

Russell started the Wolves’ push early in the second, hitting three 3-pointers during a 16-0 run.

Orlando went scoreless for nearly five minutes and managed just 10 points in the quarter, shooting 3 of 23 from the field.

The Magic twice closed within two in the final 1:24 on 3s by Aaron Gordon and Anthony, but Gordon missed a wide-open 3 with 7.2 seconds left before Vanderbilt’s misses at the line.

Magic: Coach Steve Clifford said Al-Farouq Aminu (right knee surgery) is practicing in non-contact drills, but his return isn’t imminent. Clifford said Michael Carter-Williams (sprained left foot) is closer to returning but didn’t add a timeline for his return. … Vucevic scored 11 points and Fournier added 10 in the third as Orlando made its run.

Timberwolves: Towns, who announced on social media he tested positive for COVID-19, missed his second straight game. He’s only played in four of the team’s 13 games this season. Rubio and Hernangomez each missed a second game in a row. … Minnesota set a season high with 12 blocks, led by Naz Reid and rookie Jaden McDaniels with three apiece. … The 10 points in the second were the fewest allowed by the Wolves in a quarter this season. … McDaniels, the 28th overall draft pick out of Washington, set career highs with 12 points and eight rebounds.

Magic: Continue their longest road trip of the season Friday at Indiana. The Pacers lost at home to Dallas on Wednesday.

Timberwolves: Host the Atlanta Hawks on Friday after losing 108-97 in Atlanta on Monday.