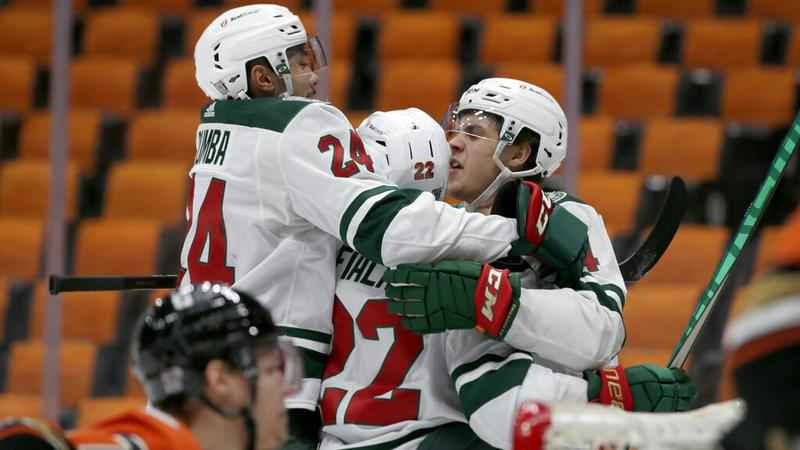 Marcus Foligno added a power-play goal for the Wild, who snapped a two-game losing streak. Minnesota was playing its second game since having its season paused for two weeks due to COVID-19 protocols.

Sam Steel scored for Anaheim, which has dropped three of its last four. John Gibson made 24 saves.

Hartman forced Anaheim’s Jacob Larsson into a turnover near the blue line in the Anaheim zone, skated into the left circle and buried a wrist shot past Gibson at 7:27 for his second of the season.

Fiala then scored his fourth goal in the last six games, putting in the rebound of a loose puck in front of the net at 8:05.

Steel got Anaheim within 2-1 , scoring in his second straight game. Steel took a pass from Danton Heinen inside the slot and then sent a backhander past Kahkonen’s glove side and into the upper right corner of the goal with eight minutes remaining in the second period.

Foligno put Minnesota back up by two goals with 3:45 remaining in the game on a one-timer after a centering pass by Zach Parise for his second of the season. It was the fourth power-play goal for the Wild, who came into the game with the worst unit in the league at 6.7%.

Minnesota’s forwards Nick Bonino and Nico Sturm, along with defensemen Ian Cole and Jared Spurgeon played in their first games since clearing COVID-19 protocols. Earlier in the day, Jonas Brodin, Victor Rask, Carson Soucy and Cam Talbot were removed from the COVID-19 list.

Goalie Andrew Hammond was added, becoming the 15th Minnesota player to appear on the list.

Four of Hartman’s 11 goals since joining the Wild last season have been first goals of the game.

Anaheim didn’t register a shot on goal until there was 3:36 remaining in the first period and had only 16 in the game. The Ducks couldn’t manage any despite having a five-on-three advantage for 1:06 in the first.

The teams meet again on Saturday.