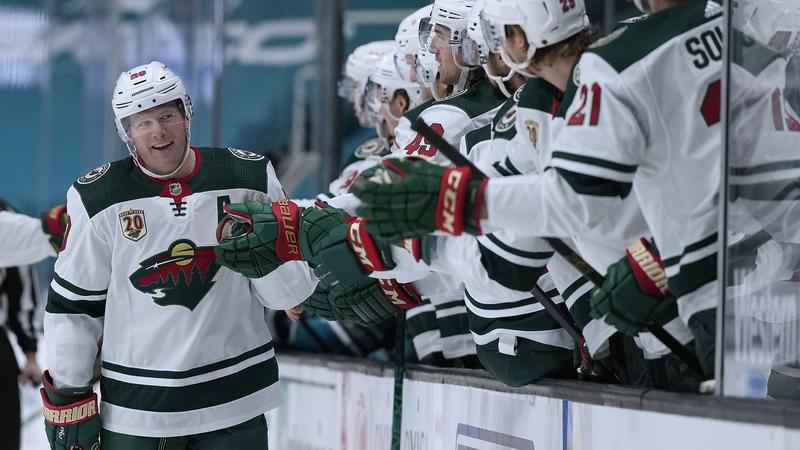 Minnesota Wild defenseman Ryan Suter (20) is congratulated by teammates after scoring a goal against the San Jose Sharks during the first period.[AP/Tony Avelar]

Ryan Suter scored 19 seconds in, Kirill Kaprizov scored for the fifth straight game and the Minnesota Wild clinched a playoff spot with a 6-3 victory over the San Jose Sharks on Saturday night.

Marcus Foligno and Jared Spurgeon also scored in the first period as the Wild jumped on top early to join Vegas and Colorado as three of the four playoff teams in the West Division following their sixth straight win.

The Sharks lost their eighth straight game and appear on the way to missing the playoffs for a second straight season. They are five points behind St. Louis for the final spot in the West.

Martin Jones allowed three goals on eight shots in the first period before getting pulled for the eighth time in 32 starts this season.

Logan Couture, Evander Kane and Joachim Blichfeld scored in the third period for the Sharks in the first game game this season in front of any spectators in San Jose. The Sharks allowed friends and family of players and organization members in preparation for the first game with fans on Monday night.

There was little to cheer about after a pregame ceremony for Patrick Marleau, who broke Gordie Howe’s all-time games played record on Monday night in Las Vegas.

Suter scored on the opening shift when he beat Jones to the short side off the rush. Minnesota added two more goals off the rush in the period, taking advantage of poor defensive play from San Jose.

Foligno beat Blichfeld for position to tap a pass from Joel Eriksson Ek just seconds after Kahkonen robbed Marc-Edouard Vlasic off a good set up from Marleau to make it 2-0.

Spurgeon added a goal late in the first from the circle off a pass from Ryan Hartman.

The Sharks controlled play for most of the second period but Kahkonen was sharp and Fiala scored late in the period when he batted a rebound of a shot by Marcus Johansson out of midair into an open net to make it 4-0 against Josef Korenar.

Marleau’s teammates all wore jerseys with his No. 12 in pregame warmups before an emotional ceremony honoring his recent record.

Marleau was joined on the ice by his wife and four sons as a video narrated by former teammate Joe Thornton featuring congratulations from dozens of former and current teammates and Gordie Howe’s son, Mark, and messages from Marleau’s parents and siblings, who couldn’t be on hand.

The tributes from former teammates continued at stoppages throughout the game.