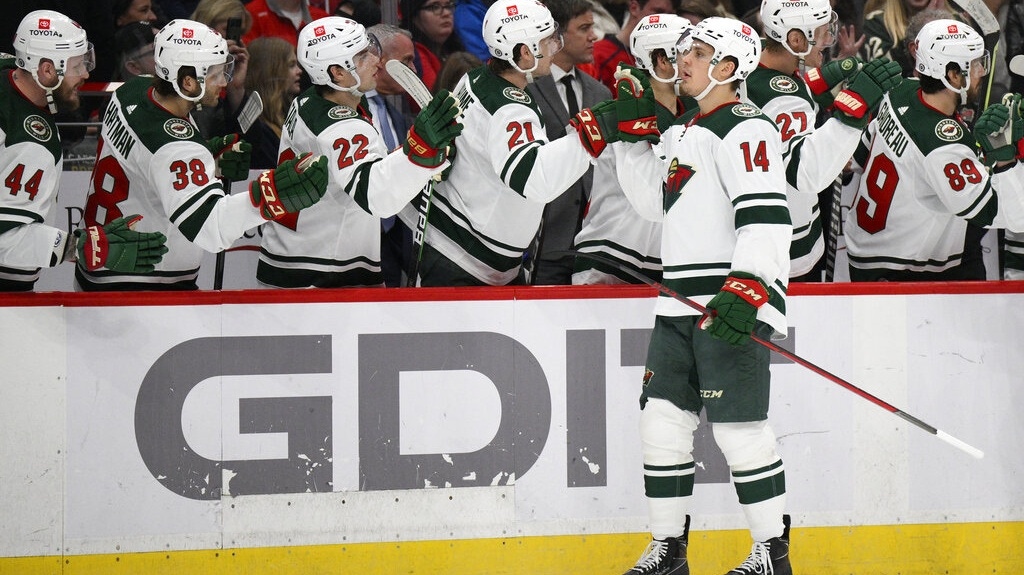 WASHINGTON (AP) — Joel Eriksson Ek scored his career-best 20th and 21st goals of the season and added an assist, and the Minnesota Wild cruised to a 5-1 victory over the Washington Capitals on Sunday night.

Marcus Foligno built on one career-high with his 20th goal and set another with his 16th assist for the Wild, who have won nine of their last 10 games while earning a point in the other.

“Smart puck management, a lot of good decision-making has been put into these wins,” Foligno said. “And each line has contributed, which is nice.”

Tyson Jost and Nicolas Deslauriers also scored as second-place Minnesota extended its lead to five points over third-place St. Louis in the Central Division. Jordan Greenway had three assists and Cam Talbot made 25 saves to extend his point streak to nine games.

Garnet Hathaway scored midway through the third period for Washington to end a stretch of eight unanswered goals allowed, dating back to Monday’s 6-1 loss to Carolina.

“It’s hard to paint it with one brush,” Washington coach Peter Laviolette said. “It wasn’t good enough again. Obviously the start. It might’ve been the only two chances we gave up, but they were mistakes, they were early on, and it’s not the way you want to start the game.”

Vitek Vanecek stopped 14 shots for the Capitals, who are 11 points ahead of the New York Islanders for the second Eastern Conference wild-card playoff spot.

Eriksson Ek now has 12 points in his last 14 games to move past his previous career-best of 19 goals set a season ago. He recorded his first of the evening 36 seconds into the game when he dashed onto Greenway’s layoff to create a break, then scored through Vanecek’s pads.

Jost doubled the lead a minute later on another goal in transition.

“This was a team that hadn’t played in a while, and we knew that we were going to have to come out and not let them get into it I guess,” Greenway said of the Capitals, whose previous game was March 28. “Go right at ’em.”

Eriksson Ek made it 3-0 with just under seven minutes to play in the second when he used his skate to control a lose puck, then muscled a shot from in close past Vanecek. He assisted on Foligno’s goal 30 seconds into the third to put the game out of reach at 4-0.

Wild: Improved to 14-0-1 against the Metropolitan division this season. … LW Kirill Kaprizov’s goal streak came to a halt at six games.

Capitals: LW Johan Larsson made his team debut. He was acquired at the trade deadline on March 21, but missed his first four games for Washington recovering from sports hernia surgery. … C Nic Dowd and D Trevor van Riemsdyk returned from upper body injuries.

With their respective goals, Eriksson Ek and Foligno became the fifth and sixth players on the Wild to reach the 20-goal plateau this season, joining Kaprizov (39), Ryan Hartman (27), Kevin Fiala (23) and Mats Zuccarello (20).

“It’s nice to get rewarded like that this season and it’s something I think that has contributed to our success as a team,” Foligno said. “You get a lot of guys that are above that 20-goal mark, you usually have a great regular season as a team.”