Wayzata High School, which has one of the most successful activities programs in Minnesota State High School League history, has won 98 state championships across its vast offerings of co-curricular experiences. Boys basketball, though, hasn’t contributed to that total since 1959.

They are off the hook now.

The Trojans finished the season on a 14-game winning streak and did so in convincing fashion. In that run, the closest margin of victory was eight points and that came in a 68-60 win over Lake Conference rival Hopkins, which had defeated Wayzata in the second game of the season. The only other loss for Wayzata was a 70-63 setback to Minnehaha Academy, the Class AAA champion, on Feb. 4.

After Cretin-Derham Hall pulled to within 45-39 with 10:54 remaining in regulation, Wayzata found the separation it was look for with a game-deciding 20-6 run that lasted 6 minutes and 16 seconds. In that spree, the Trojans were 8 of 13 from the field, including 4 of 9 from three-point range. Berkland and junior guard Camden Heide had six points each in the run. Cretin-Derham Hall, meanwhile, was 0-7 from the field in that stretch with its only points coming from the free throw line. 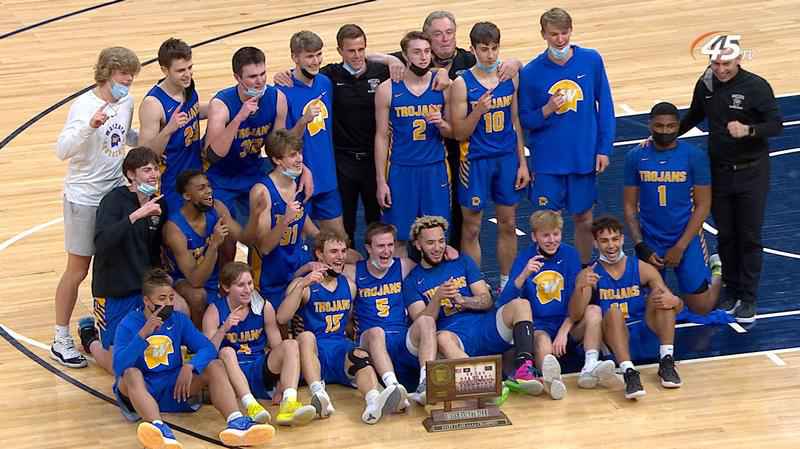 Wayzata poses with their Class 4A State Championship trophy after beating Cretin-Derham Hall at Target Center.[KSTC/45TV]

Cretin-Derham Hall (18-6), which started the season 4-4, had won 14 of its past 15 games entering the state tournament. In 2018, the Raiders won the Class AAAA crown in dramatic fashion on an alley-oop at the horn.

Junior guard Tre Holloman led the Raiders with 20 points and senior guard Marselio Mendez was next with 14.

Wayzata, the Section 6AAAA champion, built a 35-28 lead at the break behind nine points from senior guard Eddie Beeninga and eight more from senior guard Kody Williams. The Trojans were 14 of 22 from the field and made 4 of 8 three-pointers in a crisply-played half. The Trojans led by as many as seven points twice, and maintained the lead for more than 12 minutes of play.