It has been more than 60 years since Wayzata High School has won a boys basketball state championship. It is a string the current edition of Trojans would like to see end.

Wayzata, ranked No. 2 in Class AAAA, took another step toward what could be the school’s first basketball state championship since 1959 with a 72-43 victory over Shakopee in the semifinals of the Minnesota State High School League’s Boys Basketball State Tournament on Thursday, April 8 at Target Center in downtown Minneapolis.

Junior guard Drew Berkland scored 15 of his 17 points in the first half when the Trojans (18-2) built a 38-16 lead on the way to a berth opposite Cretin-Derham Hall in the big-school championship game on Saturday. Cretin-Derham Hall, the Class AAAA champion in 2018, advanced with a victory over Maple Grove earlier in the evening.

Shakopee (17-6) used a mini-surge to pull to within 50-35 with just under nine minutes remaining in regulation time. But the Trojans answered with a short run of their own and stretched the lead to 59-35 with 4:46 left. 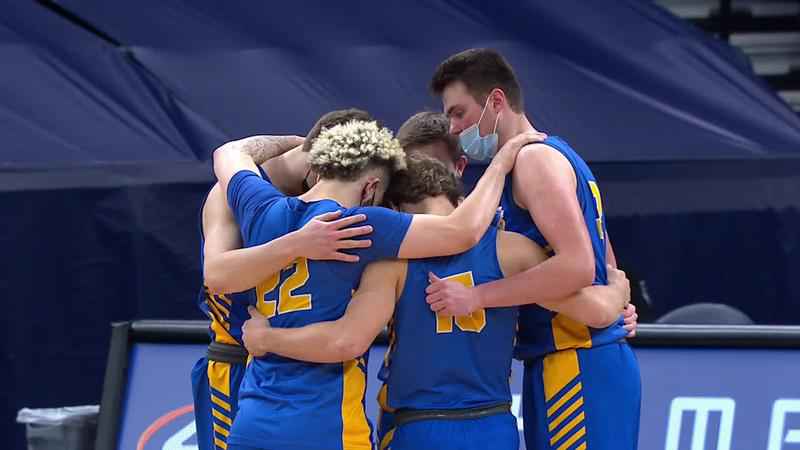 Wayzata's starting five in a huddle before their state semifinal game.[KSTC/45TV]

Wayzata wasted little time in seizing control from the start in building a 38-16 halftime advantage. Berkland powered the Trojans with 15 points and junior guard Camden Heide added seven points and four rebounds. Wayzata did not trail in the first half in shooting 51.7 percent from the field, including 6 of 7 from three-point range. Berkland made all three of three-point attempts.

Senior forward Mick Wherley had five points in the first half for the Sabers en route to a team-high 12. Shakopee was attempting to qualify for a state championship game for the first time since winning the Class AAA crown in 2005.