For the first time in more than 100 years, a basketball championship trophy will find a home at Waseca High School.

The Bluejays secured that trophy with a dramatic 51-49 victory over Caledonia in the Class AA championship game of the Minnesota State High School League’s Boys Basketball State Tournament on Saturday, April 10 at Target Center in downtown Minneapolis. Senior guard Ryan Dufault ended the century-long dryspell when he made a 12-foot jumper from the baseline with three seconds remaining in regulation to give the Bluejays (23-1) the program’s first basketball state championship since 1918.

On the final possession, which began with 34.8 seconds remaining, the Bluejays spent most of the time in the backcourt setting up screens and cutters. With overtime appearing likely as Waseca wasn’t able to penetrate Caledona’s defense for a clear look, Dufault found an opening along the left baseline. Waseca couldn’t exhale, however, until Caledonia’s Jackson Koepke, a senior guard, missed on a desperation heave from well beyond three-point arc. 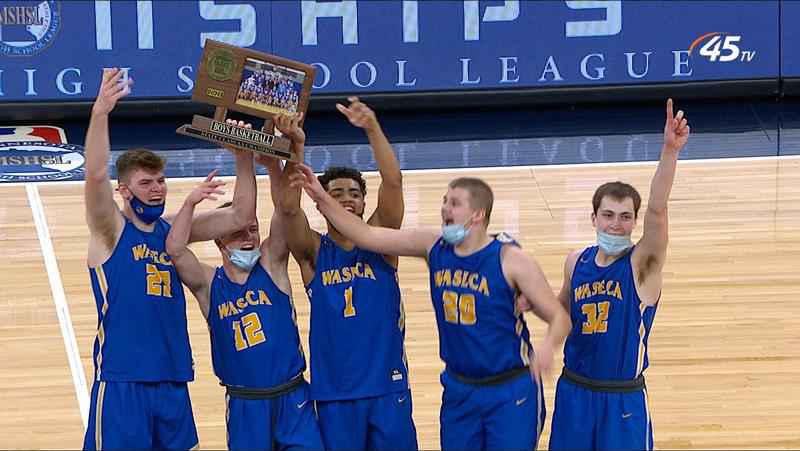 Caledonia battled throughout, eventually pulling into a 49-all tie when Privet powered in a shot off the class with 1:30 remaining regulation. After surviving Caledonia’s ensuing possession, the Warriors set up for a final shot in the closing minute, but turned it over to Waseca with 34.8 seconds remaining.

Waseca held a 29-27 lead at the break behind 15 points from Dufalt and six more from senior guard Zach Hoehn. The Bluejays led by as many as 10 points midway through the half, but the Warriors chipped away during 18 minutes of play that saw three lead changes and four times when the score was tied.