Minnesota United players and manager Adrian Heath spoke Tuesday for the first time since Portland manager Gio Savarese accused a Loons player of using a “discriminatory word” toward one of the Timbers players in Saturday’s match.

Click the video box on this page to watch United players Jacori Hayes and Wil Trapp, along with manager Adrian Heath, speak to media on Tuesday

Savarese did not specify which United player made the comment he claimed was directed at Portland’s Diego Chara, a 35-year-old 11-season MLS veteran who is Black and a native of Colombia.

“We are all in support of Diego Chara. But what happened to him today, the discriminatory word that was said to him, should not have a place anywhere,” Savarese said, visibly angry. “I’m extremely disappointed that it was not taken as serious as it should have been.”

"We are all in support of Diego Chara. What happened to him today, the discriminatory word that was said to him, should not have a place anywhere."

Gio Savarese addresses why the game was stopped in the 65th minute, and expresses his disappointment in how it was handled. #RCTID pic.twitter.com/5FUmTwErq5

United later released a statement saying the player in question and teammates who were nearby deny any inappropriate comments were made. 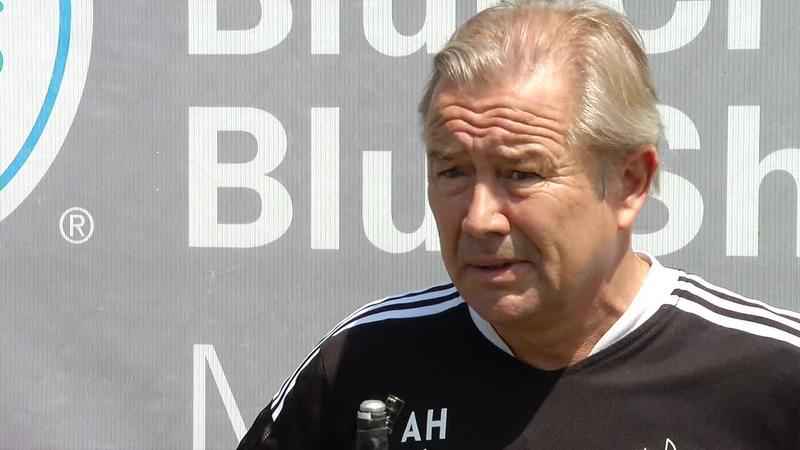 “MNUFC is built on inclusivity and respect, and does not tolerate discrimination under any circumstance,” the statement said.

Saturday’s game between United and the Timbers was briefly halted in the 62nd minute as referees sorted out a coming together of several players.

Chara had attempted a tackle as United’s Franco Fragapane possessed the ball. After the contact, the came together and exchanged words.

Officials paused the game and called in both team’s captains – Michael Boxall for United, Diego Valeri for Portland. Several other players were involved, but Fragapane’s teammates prevented him from joining the huddle.

It was apparent Portland players were angry and appealing to the referees.

The Professional Referee Organization, which manages the officiating crews for Major League Soccer matches, issued a statement explaining that no immediate disciplinary action was made because the referee did not witness or hear the alleged abuse.

“The referee then went a step further to inform captains of both teams that he was aware of the allegation, could not issue a sanction, but would be including the incident in his official match report to initiative further investigation,” PRO said in a statement Sunday. “In this instance, the referee acted appropriately in accordance with the annual diversity and anti-discrimination training protocols, which all PRO match officials are required to participate in each season to effectively identify and respond to discrimination of any kind during competition.”

“MLS has zero tolerance for abusive and offensive language, and we take these allegations very seriously. An investigation into this matter has already begun. Further information will be provided upon completion of that investigation,” the league said in a statement Sunday.

Minnesota United has said it will fully cooperate with the investigation and encourages players to do the same.

Content from the Associated Press was used in this report