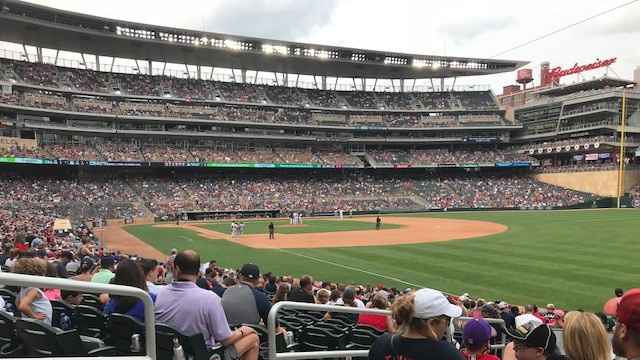 Additionally, the Twins have signed outfielder Jake Cave to a major league contract, and have outrighted left-handed pitcher Devin Smeltzer and outfielder Kyle Garlick to Triple-A St. Paul. Left-handed pitcher Charlie Barnes and catcher/infielder Willians Astudillo have been designated for release or assignment.

KSTP Sports’ Darren Wolfson learned Cave’s deal is for one-year and $800-thousand. The full amount is contingent on him making the major league roster out of Spring Training.

Enlow, 22, spent the 2021 season with High-A Cedar Rapids and went 1-1 with a 1.84 ERA (14.2 IP, 3 ER), six walks, 23 strikeouts, a .250 opponent batting average and a 1.30 WHIP in three starts. He was placed on the Injured List in May and underwent Tommy John surgery in June. The 6-foot-3, 170-pound right-hander was selected by the Twins in the third round of the 2017 First-Year Player Draft out of St. Amant High School in St. Amant, Louisiana, and is currently ranked as the 15th-best prospect in the organization, per MLB.com.

Vallimont, 24, split the 2021 season between High-A Fort Myers and Double-A Wichita, going 5-7 with a 5.84 ERA (94.0 IP, 61 ER), 61 walks, 136 strikeouts, a .255 opponent batting average and a 1.64 WHIP in 22 starts. He ranked second among all Twins farmhands in strikeouts and starts, and was ninth in innings pitched. The 6-foot-5, 220-pound right-hander was acquired by the Twins from the Miami Marlins on July 27, 2019, and was originally selected by Miami in the fifth round of the 2018 First-Year Player Draft out of Mercyhurst University in Erie, Pennsylvania. He is currently ranked as the 21st-best prospect in the Twins organization by MLB.com.

Winder, 25, split the 2021 season between Double-A Wichita and Triple-A St. Paul, going 4-0 with a 2.63 ERA (72.0 IP, 21 ER), 13 walks, 80 strikeouts, a .211 opponent batting average and a 0.94 WHIP in 14 starts. The Richmond, Virginia native also pitched for the American League team in the 2021 SiriusXM All-Star Futures Game at Coors Field. Over three seasons in the Twins minor league system, he has gone 14-3 with a 2.82 ERA (236.1 IP, 74 ER), 49 walks and 240 strikeouts. The 6-foot-5, 210-pound right-hander was drafted by the Twins in the seventh round of the 2018 First-Year Player Draft out of Virginia Military Institute in Lexington, Virginia. He is currently ranked as the ninth-best prospect in system per MLB.com and sixth best per Baseball America.

Lewis, 22, missed the entire 2021 season recovering from surgery on his right ACL, an injury he suffered prior to the start of 2021 spring training. He last played in 2019 for High-A Fort Myers and Double-A Pensacola, combining to hit .236 (122-for-517) with 26 doubles, four triples, 12 home runs, 49 RBI, 73 runs scored and 22 stolen bases in 127 games. The club’s top prospect according to MLB.com and second best per Baseball America participated in the 2019 SiriusXM All-Star Futures Game at Progressive Field. He also played for the Salt River Rafters in the Arizona Fall League that season, hitting .353 (30-for-85) with nine doubles, three home runs, 20 RBI and 21 runs scored in 22 games, earning AFL Most Valuable Player honors. The Aliso Viejo, California native was drafted by the Twins as the first overall selection in the 2017 First-Year Player Draft out of JSerra Catholic High School in San Juan Capistrano, California.

Miranda, 23, split the 2021 season between Double-A Wichita and Triple-A St. Paul, combining to hit .344 (184-for-535) with 32 doubles, 30 home runs, 94 RBI, 97 runs scored and a .973 OPS in 127 games. He led all of Minor League Baseball in hits and total bases (306), while ranking second in batting average, tied for fifth in RBI, sixth in OPS, eighth in slugging percentage (.572) and tied for 11th in home runs. The 6-foot-2, 210-pound infielder was named a 2021 Baseball America Minor League All-Star, earned a Twins minor league player of the week award on three separate occasions last season and won the Sherry Robertson Award as Twins Minor League Player of the Year. The Vega Alta, Puerto Rico native was selected by the Twins in the second round (73rd overall) of the 2016 First-Year Player Draft out of the Leadership Christian Academy in Guaynabo, Puerto Rico. He is currently ranked as the eighth-best prospect in the organization, per MLB.com, and fifth best according to Baseball America.