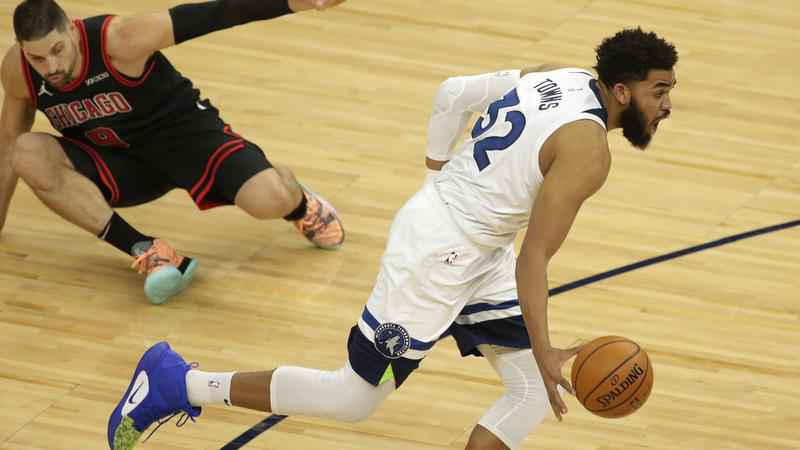 Karl-Anthony Towns had 27 points and 12 rebounds, D’Angelo Russell scored 27 and the Minnesota Timberwolves beat the Chicago Bulls 121-117 on Sunday night.

Ricky Rubio connected on five of his six 3-point attempts and scored 17 points. Rookie Anthony Edwards added 15 points for Minnesota, which held on a game after allowing Boston to come back from 17 down in the second half in an overtime loss on Friday.

Two days after his first 50-point game, Zach LaVine scored 21 of his 30 points in the second half as Chicago tried to mount a comeback. LaVine was 13 of 28 from the field and 4 of 12 from 3-point territory.

Nikola Vucevic had 18 points and Daniel Theis scored 13, but the Bulls lost for the sixth time in nine games since acquiring the two players at the trade deadline.

The Timberwolves have started games slowly this season and have led at halftime just 10 times in their 54 games. But they’ve held 11-point halftime leads in each of their past two games. This time, they made the lead stand.

Minnesota used a 21-8 run in the first quarter to take control. The Wolves took their first lead with 7:28 left in the first and never trailed the rest of the way.

Chicago cut the lead to one several times in the fourth, but Minnesota answered each challenge. After LaVine connected on a 3 to make it 103-102, Russell re-entered the game and helped the closing push with seven points in the final 3:36. Towns added a punctuating 3 in the final minute and closed out the game with a pair of free throws.

Bulls: Garrett Temple missed his seventh straight game with a right hamstring strain. … Troy Brown Jr., another trade acquisition, has taken Temple’s place as a defensive wing off the bench. Brown had 15 points and seven rebounds in the game.

Timberwolves: Towns just missed a triple-double with eight assists. It’s his 57th career game with at least 10 points, 10 rebounds and five assists. … Edwards extended his streak of games with a steal to 22, the longest active streak in the NBA and the longest streak by a rookie in franchise history.

Bulls: At Memphis to play the Grizzlies on Monday night.

Timberwolves: Host the New Jersey Nets on Monday night. New Jersey, already without James Harden, announced that Kyrie Irving would be out of the game for personal reasons.