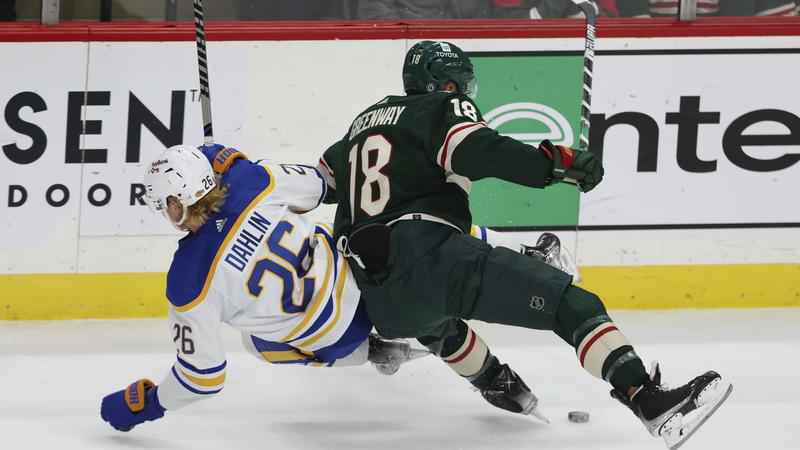 Tage Thompson scored the only goal in a shootout, lifting the Buffalo Sabres to a 3-2 victory over the Minnesota Wild on Thursday night.

After the first five shooters came up empty, Thompson ended the game when he beat Minnesota goalie Cam Talbot with a forehand.

Dylan Cozens and Mark Pysyk scored for the Sabres in regulation. Ukko-Pekka Luukkonen made 30 saves and stoned the Wild in the tiebreaker.

Kirill Kaprizov and defenseman Jon Merrill scored for Minnesota, and Talbot made 38 saves.

Minnesota, the top team in the Western Conference, lost its third straight following an eight-game winning streak that ended Saturday. The Wild didn’t play a scheduled game against Carolina on Tuesday because the Hurricanes had four players test positive for COVID-19.

Meanwhile, the Sabres snapped a seven-game losing streak with a victory at Winnipeg on Tuesday, and they came out of the gate with plenty of energy in this one, outshooting the Wild 19-6 in the first period.

Minnesota got the only goal of the period, though, when Merrill and fellow defenseman Dmitry Kulikov teamed up to put the Wild on the board.

After Kaprizov’s shot sailed wide, Ryan Hartman gathered the puck in the corner. He passed it to Kulikov, who fed it across the high slot to Merrill at the top of the right circle. Merrill’s one-timer slipped through Luukkonen’s pads and trickled into the net.

Cozens tied the game at 8:05 of the second when he tipped in Henri Jokiharju’s shot for his eighth goal of the season.

Midway through the second, the Wild came up empty on a four-minute power play after Sabres defenseman Rasmus Dahlin was assessed a double-minor for high sticking Joel Erickson-Ek in front of the Buffalo net. They managed five shots on goal but Luukkonen and the Buffalo defense stood tall.

Minnesota entered tied for the NHL lead in assists by defensemen, and tacked on two more on the team’s second goal.

Kaprizov gave the Wild a 2-1 lead when he scored his 11th of the season with just under a minute to play in the second. Deep in Minnesota’s zone, Alex Goligoski tipped the puck to Jared Spurgeon, who flipped it out of his own zone to center ice.

When Buffalo couldn’t gain control, Kaprizov jumped on the puck to start a 2-on-1 rush. Once again, Luukkonen got a piece of the puck, but Kaprizov’s wrist shot slipped between his skates and dribbled across the goal line.

But the Sabres kept up the pressure, and it paid off when Pysyk scored his first of the season to tie it 2-all with eight minutes to play. After Kulikov turned the puck over behind the Minnesota net, Vinnie Hinostroza spotted Pysyk streaking down the slot and he beat Talbot under his right arm.

Sabres: Wrap up a three-game road swing Friday at Pittsburgh.