The University of St. Thomas

***CLICK ON THE VIDEO BOX TO HEAR FROM THE ST. THOMAS PRESIDENT, VICE PRESIDENT, AND BLASI***

Blasi was selected as National Coach of the Year in 2005-06. He also coached one Hobey Baker Award winner and eight other Hobey finalists; 10 All-America players; one CoSIDA Academic All-America recipient; and 25 Redhawks who went on to play in the National Hockey League. 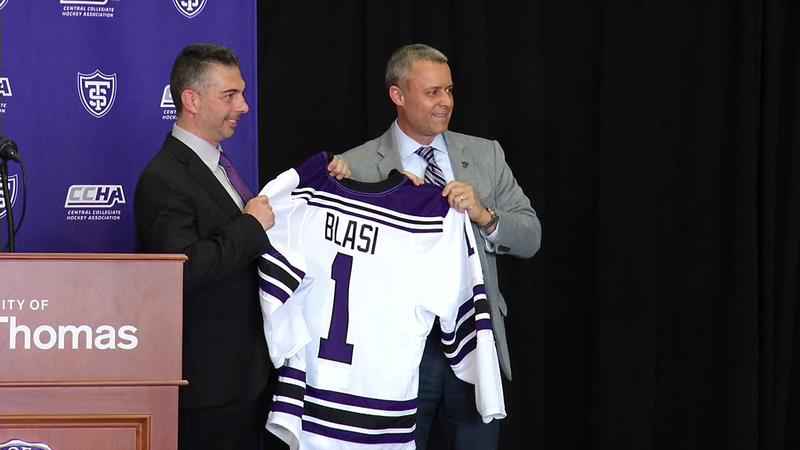 "I would like to thank Dr. (Julie) Sullivan and Dr. (Phil) Esten for this incredible opportunity and their trust in me to lead our hockey program in this transition," Blasi said. "I’m honored, proud and excited to be a part of the St. Thomas family.

"First, we are uniquely positioned in the ‘STATE of Hockey’ with academic excellence, athletic tradition, and incredible alumni and community support. Next, the commitment and leadership from Dr. Sullivan, Dr. Esten, and the Board of Trustees will help lay the groundwork for success. Plus, there’s a beautiful campus, and a foundation of Faith that I believe will position us to create a national brand for hockey at St. Thomas. We will strive, each and every day, to be the best we can be. We will be grateful and proud to wear the Purple and represent this university."

"I’m thrilled to welcome Rico Blasi and his family to Minnesota and the University of St. Thomas," said Phil Esten, Vice President and Director of Athletics. "During our national search we spoke with many impressive and highly-qualified individuals, and Coach Blasi quickly rose to the top of our list. Rico is a seasoned, culture-driven, student athlete-centric leader who is aligned with our institutional and athletics values and perfectly positioned to help transition and build our Division I program. He brings a well-earned reputation as a program builder, and his contagious energy and passion for the sport are impressive. Those qualities made him our clear choice to lead St. Thomas into the future.

"Simply put, Rico brings the right experience, the right vision, and the right values to help St. Thomas hockey succeed on the ice and in the classroom."