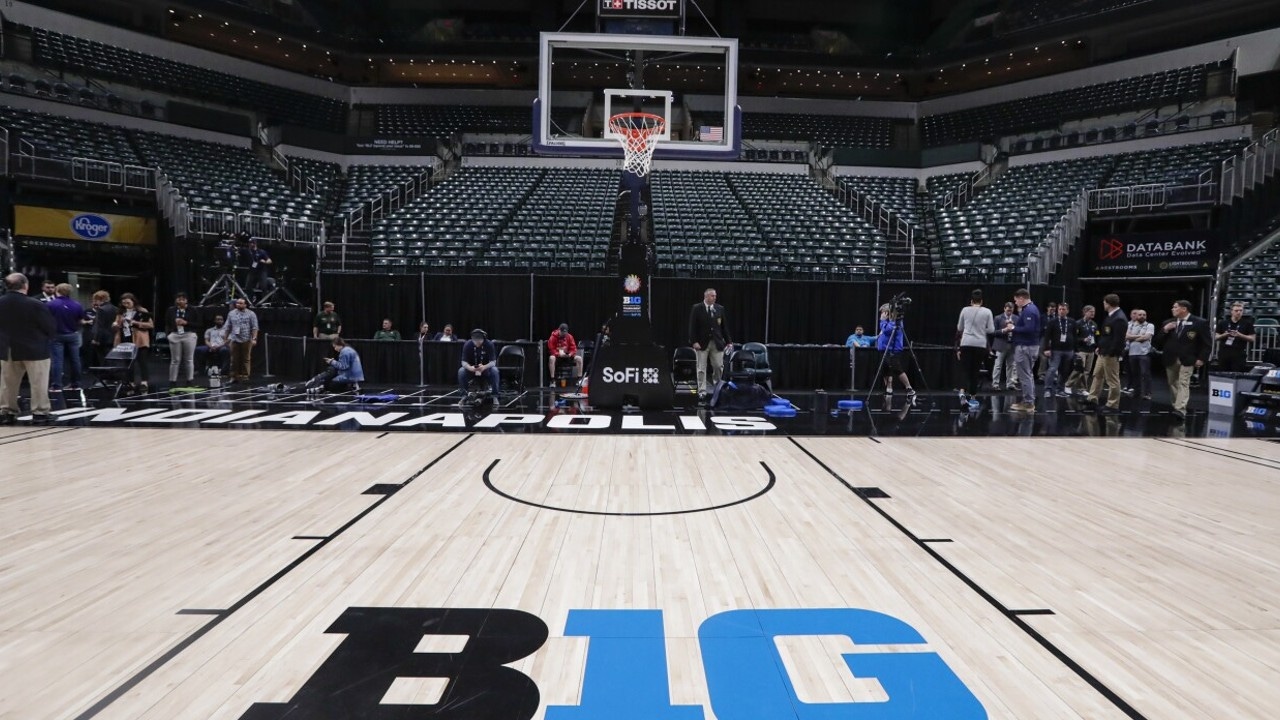 FILE - In this March 12, 2020, file photo, the seating area at Bankers Life Fieldhouse is empty as media and staff mill about in Indianapolis after the Big Ten Conference announced that remainder of the men's NCAA college basketball games tournament was cancelled. (AP Photo/Michael Conroy, File)

The Big Ten Conference is bringing its basketball tournaments to Minneapolis.

Wednesday, the conference announced that Target Center will host the 2023 Big Ten Women’s Basketball Tournament and both the men’s and women’s 2024 Big Ten basketball tournaments.

“We are thrilled to bring the Big Ten Basketball Tournaments to Minneapolis, beginning with the Big Ten Women’s Tournament in 2023,” Big Ten Conference Commissioner Kevin Warren said in a statement. “Minneapolis has a strong history of hosting exceptional events such as the recent NCAA Women’s Final Four, and also features world-class venues and an outstanding base of Big Ten alumni and fans. We look forward to creating new memories and experiences for our student-athletes, coaches, and member institutions, further expanding our fanbase, cultivating relationships with the business community, and fostering a positive and lasting impact on the Twin Cities.”

The 2023 women’s tournament will mark the first time the event is played outside of Indianapolis since 2015, when it was played just outside Chicago. The men’s tournament had also been in Indianapolis for many years but has also made stops in Washington, D.C. (2017), New York City (2018) and Chicago (2019) before returning to Indianapolis the past three years.

The 2023 men’s tournament had previously been announced it will be held at Chicago’s United Center. When Minneapolis hosts the tournament in 2024, it will be the fifth city to host the event since it began in 1998.

“We are proud to carry the tradition of Big Ten men’s and women’s basketball excellence to Minneapolis,” Minnesota Sports and Events CEO Wendy Blackshaw said in a statement. “After this year’s sold-out NCAA Women’s Final Four, hosting the Big Ten Women’s Basketball Tournament in 2023, and the Big Ten men’s and women’s tournaments in 2024 will continue to fuel Minnesota’s reputation as a true basketball state. With our terrific partners, especially Target Center and its state-of-the-art venue, we can’t wait to welcome more basketball fans to our great state.”

“I think Minneapolis is the perfect city to host the next two years of the Big Ten Women’s Basketball Tournament and I’m thrilled for our fans to have this opportunity to enjoy the highest level of women’s college basketball,” University of Minnesota women’s basketball head coach Lindsay Whalen added. “We’ve seen when women’s sports are supported, as they are in Minnesota, they can bring in massive audiences. The recent Final Four is a perfect example of what this community has to offer our game. This entire state does such a great job at supporting all women’s sports at every level and this will be no exception.”