Top-ranked Lakeville South completed the big-school championship pairing following a resounding 40-14 victory over St. Michael-Albertville in the Class AAAAAA semifinals on Friday, Nov. 19 at U.S. Bank Stadium. The Cougars (11-0) took control early and were never threatened on their way to their first championship game appearance since finishing as the Class AAAAA runner-up in 2006.

The victory sets up a Class AAAAAA championship game that features two heavyweights. Lakeville South, the top team in the QRF rankings, faces No. 3 Maple Grove for the big-school championship on Friday, Nov. 26 at 7:30 p.m. The Crimson (11-1) advanced with a 35-3 thumping of No. 2 Eden Prairie in the other Class AAAAAA semifinal on Thursday night.

Junior running back Carson Hansen rushed for 201 yards on 14 carries and scored three touchdowns. He also had a reception for a 34-yard touchdown as the Cougars rolled up 333 yards of total offense. Senior quarterback Camden Dean completed 2 of 3 passes and both were for touchdowns.

Lakeville South bolted to a 14-0 lead in just three offensive plays. After their first offensive play yielded a modest two yards, Hansen zipped around the left side and sailed 38 yards for a touchdown run along the sideline. Just more than a minute later, Hansen, in a near-carbon copy raced 31 yards for another touchdown. Both of the ultra-quick scoring drives came after fumbles by St. Michael-Albertville gave the Cougars a short field to travel.

St. Michael-Albertville (7-5), limited to 153 total yards, got on the board with 8:04 remaining in regulation on a three-yard run from junior running back Connor Luongvan when the game was in running time. Senior running back Jarrett Bennett then plowed in the endzone on a successful two-point conversion attempt. After a successful onside kick, the Knights scored again when senior quarterback Owen Neros hit senior tight end Rylan Maynard with a 12-yard scoring pass with 4:53 remaining. 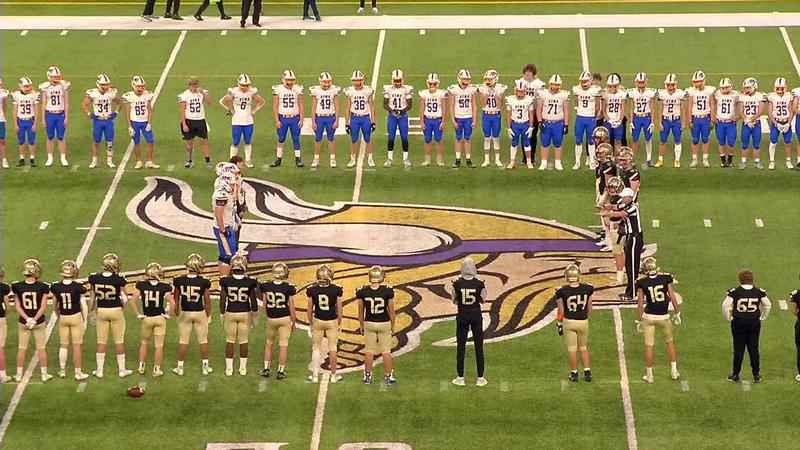 Lakeville South vs. St. Michael-Albertville in the Class 6A state football semifinals on Friday night.[KSTP/Jeff Brioschi]