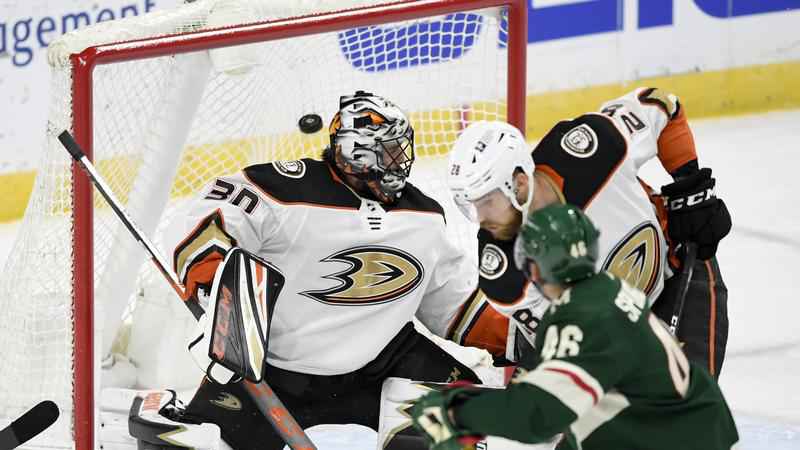 Minnesota Wild's Jared Spurgeon (46) watches as the his goal gets by Anaheim Ducks goaltender Ryan Miller (30) and Jani Hakanpaa (28), of Finland, during the first period of an NHL hockey game Wednesday, March 24, 2021, in St. Paul, Minn.[(AP Photo/Hannah Foslien)]

Jared Spurgeon had two goals, and Nico Sturm scored the tiebreaker as the Minnesota Wild beat the Anaheim Ducks 3-2 on Wednesday night and swept the teams’ two-game set.

Cam Talbot made 28 saves for the Wild, who extended a franchise record with their 10th straight home win. Ryan Suter had two assists for Minnesota, becoming the fifth active NHL defenseman to reach 600 career points.

Derek Grant and Max Comtois scored for the Ducks, who have lost seven of eight. Ryan Miller made 23 saves in his sixth straight start with John Gibson out for his fifth game with a lower-body injury.

Sturm scored his fourth goal of the season after a mistake by Miller. A dump-in from Nick Bjugstad went on goal. Miller tried to cover the puck, but it slid away, right to Sturm for an easy tap-in.

Spurgeon’s two goals, giving him three this season, came off deflections on passes from Suter.

On the first goal, Suter passed from near the top of the faceoff circle to the middle, where Spurgeon redirected the puck past Miller. The second, giving Minnesota a 2-1 lead, was a tip in the middle of the zone after Suter’s point shot.

Grant’s second goal of the season came just 24 seconds after Spurgeon’s first as Anaheim answered quickly. Another quick goal from Comtois tied the game just 22 seconds into the second period.

Comtois, who was a healthy scratch for the first time this season in Monday’s game between the teams, has 10 goals to lead the Ducks.

The game started at 4:30 p.m. Central time as the first game of a TV tripleheader. The teams were ready for the start with two goals and two fights within the first 9:34 of the game.

Soucy wasn’t penalized for the hit. Getzlaf was given an instigator penalty, a 10-minute misconduct and the two were assessed fighting penalties.

After playing each other on Monday, Anaheim and Minnesota each placed players in the league’s COVID-19 protocols. Zach Parise was placed on the COVID Protocol Related Absence List on Wednesday, with Cramarossa recalled from the taxi squad to take Parise’s spot in the lineup.

The Ducks had four players enter the protocol on Tuesday, including three who were in uniform for Monday’s game. Danton Heinen, Ben Hutton, Jacob Larsson and Anthony Stolarz joined the list. Hutton and Larsson, a pair of defensemen, and Stolarz, the backup goaltender, were in the lineup on Monday.

Ducks: Continue their season-long trip on Friday at St. Louis, the first of two games between the teams.

Wild: Finish their three-game homestand Thursday against the Blues.