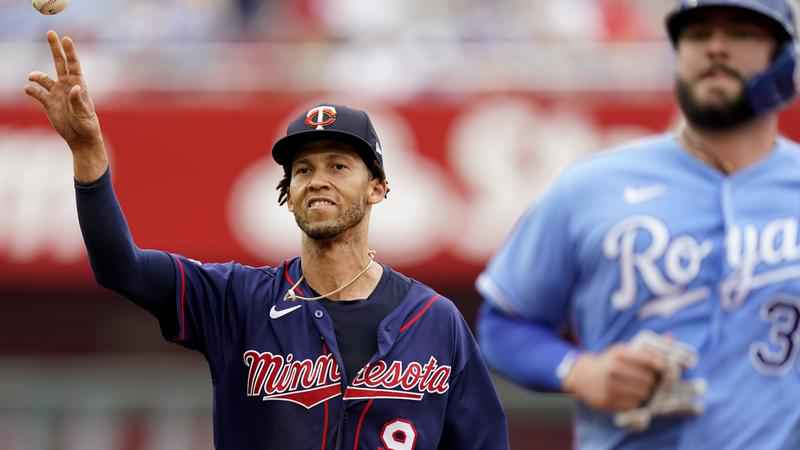 Minnesota Twins shortstop Andrelton Simmons (9) throws to first to get the final out of a triple play on Kansas City Royals' Cam Gallagher, right, during the third inning.[AP/Charlie Riedel]

Minnesota first baseman Miguel Sanó swooped in to catch a popped-up bunt and start a triple play, highlighting the Twins’ 2-1 win over the Kansas City Royals on Sunday.

Sanó hit an RBI double in the third inning, then made the key defensive play in the bottom half.

With Jarrod Dyson on second and Cam Gallagher on first, Nicky Lopez bunted to the right side. Sanó charged in to make the catch and threw to shortstop Andrelton Simmons to double off Dyson.

Simmons then trotted toward Gallagher and tossed to second baseman Nick Gordon, who was covering first, to complete the Twins’ first triple play since 2019. The previous time Kansas City hit into a triple play was 2012.

Twins starter Bailey Ober gave up one run and five hits in four innings, striking out four in his second career start. The lone run came in the fourth when Andrew Benintendi singled home a run, his sixth RBI of the four-game series.

Relievers Luke Ferrell (1-0), Jorge Alcala, Tyler Duffy and Hansel Robles kept the Royals off the bases until the ninth inning, when Whit Merrifield hit a leadoff double. Taylor Rogers entered and finished for his fifth save of the year.

The Twins took the lead in the fifth when Trevor Larnach was hit by a pitch with the bases loaded.

Royals: RHP Josh Staumont was reinstated from the 10-day injured list and RHP Tyler Zuber was optioned to Triple-A Omaha.

Twins: RHP Shaun Anderson (finger blisters) was placed on the 10-day IL. Ober was recalled from Triple-A St. Paul in the corresponding move. … RHP Kenta Maeda (right adductor strain) threw a 35-pitch bullpen session, and a rehab assignment will likely be the next step for the 33-year-old righty, who is currently on the 10-day IL.

Royals: The Royals placed INF Adalberto Mondesí (left hamstring strain) on the 10-day IL and recalled OF Edward Olivares. Mondesí had returned to the major league roster on May 25 after missing the start of the season with a right oblique strain.

Minnesota will return home to face the Yankees on Tuesday. Michael Pineda (3-3, 3.40) will take the mound for the Twins.